Tuesday’s ad is another by famed Swiss illustrator Herbert Leupin. Like many of his others, I’m not sure what beer this ad is for or when it was created, though he worked mainly beginning in the late 1930s and then took up paintings around 1970. So we can safely say it was between those dates. The two glasses look like they could be separate pieces, since the blue backgrounds look just a hair different shades. But boy oh boy, Leupin sure could draw beer that looks good enough to drink. 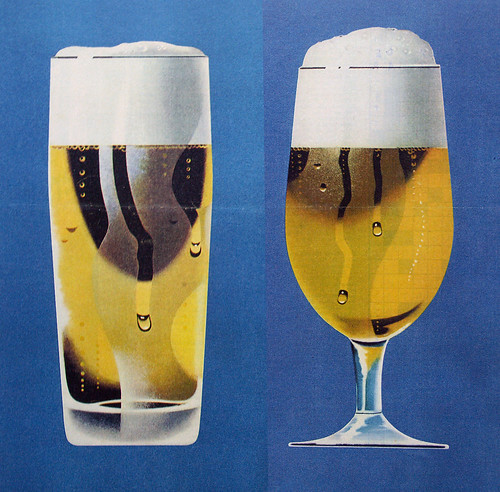 It’s nice to know that after the world ends in a nuclear fireball, we’ll still have beer to drink. According to an interesting article at the Nuclear Secrecy Blog Restricted Data, beer was tested and found to be relatively safe after being exposed to a nuclear blast. In 1955, Operation Teapot tackled the problem of what surviving humans might drink after the big one was dropped. In Beer and the Apocalypse, author — and historian of science at the American Institute of Physics — Alex Wellerstein details the experiments and their results. It’s a fascinating and frightening tale. And at least it gives me an excuse to increase the size of my beer cellar.