Wednesday’s ad is from 1939, it’s by the United Brewers Industrial Foundation, promoting the brewing industry six years after the end of prohibition. According to the ad, brewers had bought five million pounds of farm products in those half-dozen years. Barley, wheat, rice and corn, from tree million acres of American farm lands. It’s also one of the earliest instances I’ve seen of the tagline they used throughout the 40s and 50s: “Beer … a Beverage of Moderation.” 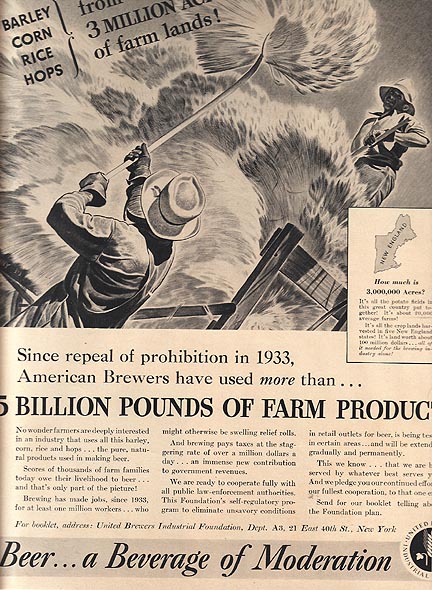 Well this is a tidy bit of news. CAMRA is reporting that the number of breweries in the United Kingdom is now over 1,000 for the first time in over 70 years. Other tidbits include that there are “[t]wice as many brewers now in operation compared to a decade ago” and the “[n]umber of micro breweries have risen despite recession and pub closures,” something we’ve also experienced here in the U.S., too. You can read the full story in the Scotsman, but tonight I think an English beer may be in order.

With binge drinking front and center of many public policy concerns, the UK’s University of Bristol decided to examine whether it was because of the glass people were drinking out of. The School of Experimental Psychology set out to “explore the influence of glass shape on the rate of consumption of alcoholic and non-alcoholic beverages.” Their results, Glass Shape Influences Consumption Rate for Alcoholic Beverages, were published recently in PLOS ONE, a peer reviewed, open access journal.

Study participants were given one of the two types of glasses below.

According to the summary by Health Today, “People took about almost twice as long to finish when drinking alcohol from the straight-sided glass, compared with the curved glass. There was no difference in drinking rates from the glasses when the drink was nonalcoholic.” The Bristol scientists conducting the study speculated that “people may swill their alcohol faster from curved glasses because it is more difficult to accurately judge the halfway point of these glasses,” adding that “drinkers may be less able to gauge how much they have consumed.”

“People often talk of ‘pacing themselves’ when drinking alcohol as a means of controlling levels of drunkenness, and I think the important point to take from our research is that the ability to pace effectively may be compromised when drinking from certain types of glasses,” said study researcher Angela Attwood of the University of Bristol’s School of Experimental Psychology in the United Kingdom.

While there is a difference, is there a correlation? The researchers seem to think so, though their methodology is unique and it’s the first time, as far as they know, that such a study has been conducted. 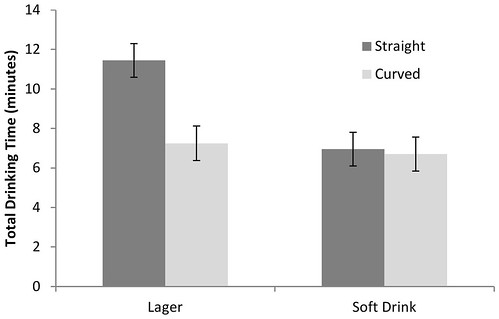 Participants were 60% slower to consume an alcoholic beverage from a straight glass compared to a curved glass. This effect was only observed for a full glass and not a half-full glass, and was not observed for a non-alcoholic beverage. Participants also misjudged the half-way point of a curved glass to a greater degree than that of a straight glass, and there was a trend towards a positive association between the degree of error and total drinking time.

But unfortunately they begin with the false premise that “alcohol consumption is associated with increased mortality and morbidity.” Numerous studies have shown that people who drink alcohol in moderation are likely to live longer than either abstainers or binge drinkers (however that’s defined). And at least one study has shown that even binge drinkers will likely live longer than teetotalers. And while there are some persons genetically more susceptible to certain diseases if they drink too much, many other diseases have positive correlations with moderate drinking, that is alcohol use may lower the risk of people contracting those diseases. So public policy really should be aimed at educating the citizenry that it’s in their best interest to drink alcohol responsibly and in moderation. At a minimum, both sides of the story of alcohol should be part of the public discussion instead of the often one-sided version we have today that takes all of the negatives as givens and has no time for any positive findings to balance perspectives.

After more proselytizing and propaganda in their introduction it seems clear which side of the debate they come down on, which I think tends to influence the study itself. They’re looking for a way to reduce drinking — not that that’s a bad goal in and of itself — but while the results seem interesting, the fact is that they set out not to “explore the influence of glass shape on the rate of consumption of alcoholic and non-alcoholic beverages,” as they initially stated, but instead to effect public policy for their somewhat anti-alcohol agenda. It’s not hard to tease that out of how they characterize what they’re doing. For example, when they explain the rise of “branded drinking glasses in the United Kingdom,” they also include statements like “[w]hile alcohol advertising is still permitted in the United Kingdom” (as if they’d prefer it was not or suggesting it one day may not be) and state that glassware with a brewery’s logo on it constitutes a “currently unregulated, marketing channel,” it becomes nakedly obvious that they disagree with the world the way it is.

Happily, unlike many such studies, the entire journal article is online, so you can judge for yourself. I tend to be somewhat paranoid about these affairs, and am usually skeptical about such efforts.

Another issue I have is the glasses themselves. The first is meant, I presume, to be an average pint glass, but it doesn’t look quite like the familiar shaker pint glass. It more resembles the stange, though shorter, but it has the straight walls and does not curve out and taper slightly into a wider mouth like most pint glasses. The second glass is a common type of pilsner glass and more appropriate to the beer they used in the study. But that first glass I’ve rarely seen used in a pub or bar, at least on these shores. Isn’t it just as likely they overlooked the obvious: that participants drank faster because the beer tasted better in a more appropriate glass? They certainly never addressed using a more proper glass and seemed to overlook that aspect entirely, as if it didn’t matter one iota. Considering how careful they appeared to be with so many other aspects of the study, the choice of glasses seems almost comically devoid of reason.

The beer was apparently a 4% a.b.v. lager from Brasserie Saint-Omer, a French brewery. Why an English university didn’t see fit to include a British beer in the study is not disclosed, and to my mind makes little sense. Clearly, the researchers need to get out to the pub themselves a little more often.

But from this preliminary, somewhat flawed first attempt, the authors make the leap that their findings could inform public policy and use them to alter “policy decisions regarding structural changes to the drinking environment which may reduce drinking rates and correspondingly impact on resulting alcohol-related harms.” Whoa, cool your jets there. That’s quite a leap, with almost no apparent understanding of the importance of glassware to beer, even as they admit their “study cannot fully resolve the mechanism which underlies the effects we observed.”

Even if you’re not a hardcore beer geek who insists on just the right glass for a beer, I think we can all agree that a plastic cup is not as good as glass and that some glassware simply works better with certain drinks, in the worlds of beer, wine and spirits. Imagine the hue and cry if they’d suggested people would sip their champagne much more slowly if one used a martini glass or coffee mug for their next wedding toast. I just can’t abide the notion that glassware choice should be dictated by a public policy trying to slow the pace of drinking across the board, using a bludgeon for a problem I’m not even sure actually exists. I tend to be a slow drinker already, so I may not be the target demographic, but I’d still be swept up in its net if my glassware choice was arbitrarily dictated by politicians and so-called health officials. No matter how well-intentioned, they would undoubtedly remove certain glassware from circulation, limiting the types a bar or pub could use in serving their beer. That, I believe, would be bad for all of us. You want that pilsner in a pilsner glass? Forget it, you’ll get the pint glass and like it. Otherwise, you can’t be trusted to drink slowly enough. There are already enough bad bars using a single glass to serve everything they stock, it seems like this could only make things worse.