Thursday’s ad if for the German beer Hackerbrau, which is the Hacker in Hacker-Pschorr. The ad is from around 1920, long before they merged again in 1972. The ad was illustrated by Ludwig Hohlwein , who did a number of beer ads during the same period of time. 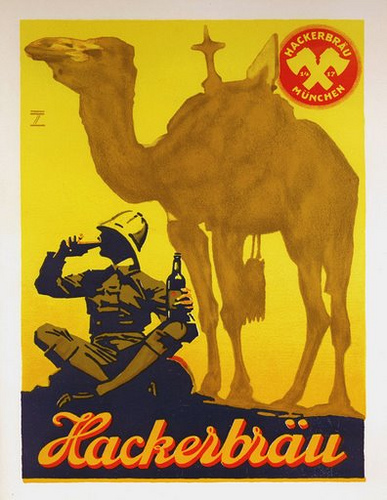 According to the Beer Institute (BI), recent economic analysis has revealed “that brewing and importing accounted for $223.8 billion in the economic output of the United States — with employees earning nearly $71.2 billion wages and benefits, and generating more than $44 billion taxes. In 2010, the last year tax statistics were available, 45 percent of what every beer drinker paid for a beer went to taxes of some kind, which “makes taxes the most expensive ingredient in your beer,” Joe McClain, president of the BI, stated.

The Beer Institute has just released a national poll of 1,000 likely voters, which found strong opposition to increasing taxes on beer. Nine out of 10 voters in the poll agreed that “raising taxes on beer will mean working class consumers will have to pay more.”

The poll also found that self-identified “beer drinkers” are a larger proportion of the electorate than self-identified supporters of either the Tea Party of Occupy Wall Street movement, and were evenly split between Republican and Democratic parties.

According to a press release by the Industrial Info Resources, there are at least “65 major capital and maintenance projects in the beer brewing segment that are under development or recently have started construction.” The public press release is very short, more of a tease really, as they want you to become a member and subscribe to their information. For just $5.95, I could read the terse 290-word press release, or instead I can tell you what they’re willing to tell is for free.

SUGAR LAND–September 27, 2012—Researched by Industrial Info Resources (Sugar Land, Texas)—Beer brewers, both large and small, are pouring investments into building new facilities and expanding existing operations to the tune of more than $800 million. Industrial Info has uncovered more than 65 major capital and maintenance projects in the beer brewing segment that are under development or recently have started construction. Project investment values range from $1 million to just more than $100 million.

Pop Chart Lab, who have tackled beer before in graphic form, have just released their newest creation, a map of the Breweries of Europe. At their website, it’s an interactive map, and you can also purchase a poster of it. As Charlie Papazian points out (in his Tweet where I learned about the map), it’s “not complete but pretty good.” It’s hard to see the detail when it’s small, but at Pop Chart Lab’s website, the map is interactive, so you can zoom in to see all of the detail. 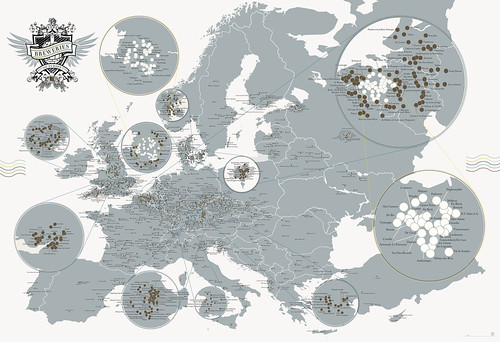