Thursday’s ad is for another one for Schlitz, this one from 1959. Apparently the way to “Know the Real Joy of Good Living” is to be near a mountain lake. And wear pink. 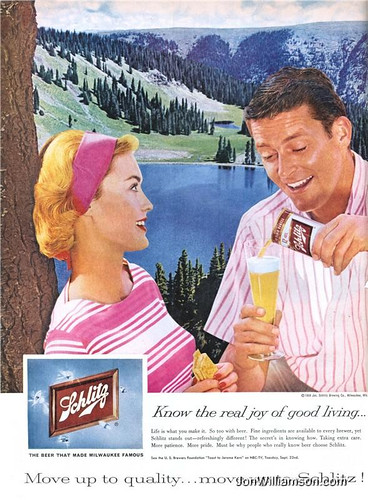 At this year’s Craft Brewers Conference, the keynote address was given by Kim Jordan from New Belgium Brewing. The context of Jordan being asked this year to speak is because ten years ago, when CBC was in New Orleans, she gave an optimistic keynote speech then predicting that craft beer would break the 10% barrier. While we’re not quite there yet — the current estimate is 6.5% of volume — great progress has been made and the future certainly looks rosier than it did in 2003. As someone who was sitting in the audience in New Orleans during that keynote, I was keen to hear what Kim would have to say a decade later. Below is a photo I took of Jordan giving that speech in 2003. 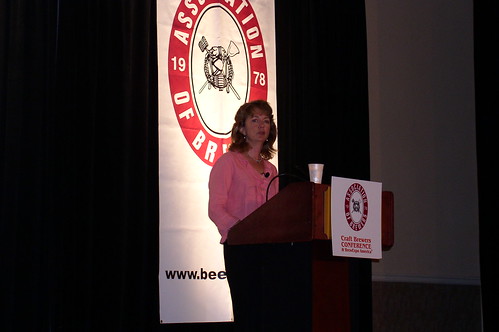 Below is my video of Kim Jordan’s keynote address. Technical difficulties (okay, I was slow on the draw) delayed the start and I missed the first few seconds, probably no more than 30 seconds worth. Also, due to YouTube’s size limitations, I had to break it into two parts in order to upload it. Enjoy.

Today’s infographic, The World of Beer, is subtitled “An introduction to the major types of ales and lagers.” So at least they’re not trying to be complete. Still, I”ve seen worse overviews.

So yesterday my friend Maureen Ogle, author of Ambitious Brew, was in town, on vacation with her family, and we had lunch at Russian River Brewing. Before lunch, we stopped by the production brewery so Maureen could say hello to Vinnie and Natalie, and also so she could take a peek at the brewery. After the tour, I was chatting with Vinnie who told me some big news. Although it’s apparently been in the works for some time, and is not a secret, they’ve been fairly low key about spreading the news.

While we were all in D.C. at CBC, Jennifer Talley, who was with Squatter’s in Utah for eighteen years, and more recently was the brewery production manager at Redhook Brewery in Washington, was in Sonoma County searching for a place to live. That’s because as of May, she’ll be brewing with Vinnie at Russian River Brewing, and eventually will be taking over the brewery’s barrel program. She’ll start out as a shift brewer and once Kevin Robinson leaves Russian River to concentrate on his new venture, Divine Brewing, Jen will become lead brewer. As Vinnie joked with me, “she has more experience than I do.” They’re thrilled to have her, and it’s easy to see why. Jen’s been one of the more important and influential brewers in her more than two decades in the industry. She was the 2011 recipient of the BA’s Russell Schehrer Award for Innovation in Craft Brewing, is on the technical committee of the MBAA and started her brewing education at the Siebel Institue of Brewing Technology. There’s no doubt her presence will make Russian River even more of a powerhouse brewery than it already is, not to mention freeing Vinnie to concentrate on big picture concerns. Congratulations to both Russian River and Jen for the new gig. I’m certainly glad to have another stellar brewing neighbor here in Sonoma. 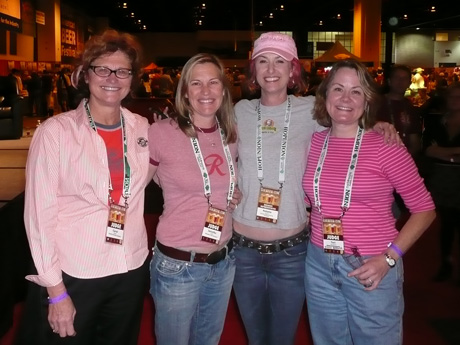 Jennifer and Natalie Cilurzo (middle two), both now from Russian River Brewing, along with Carol Stoudt (left) and Teri Fahrendorf (right) after a panel discussion at GABF on women in brewing in 2007.