Friday’s ad is for Narragansett, from 1961. After the tragedy in Boston and the swift capture/killing of the perpetrators last night and today, I thought an ad with the Red Sox was in order. This one shows Boston’s schedule for the 1961 season, and shows a cask of the Rhode Island beer emblazoned with the tagline “Straight from-the-Barrel Taste.” It’s hard to believe that was what they were going for in 1961, or that people would respond to such a claim. 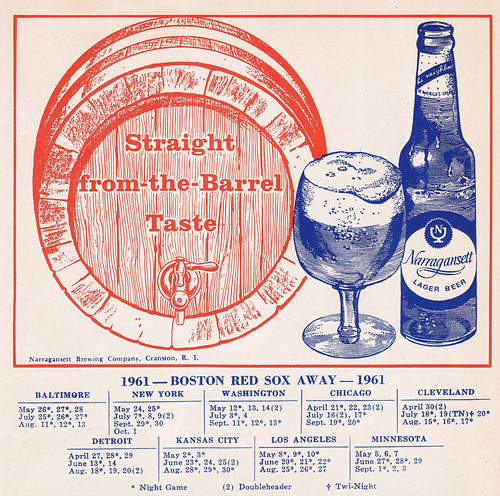 Today’s infographic is perfect for Friday Frivolity, though I wish I’d known about it for April Fool’s Day. It was created by the UK beer bloggers Boak & Bailey, and suggests that not everyone is a fan of the infographic, and possibly not in favor of my project this year trying to round up as many of them as possible each day. Their Generic Beer Infographic is a hilarious take on many of the general infographics that have been created recently, and often get the information wrong.

The inevitable approval of the merger between Anheuser-Busch InBev and Grupo Modelo moved one step closer today, according to Harry Schuhmacher’s Beer Business Daily, who writes that a “consent decree has been filed with a federal judge today seeking court approval of the ABI-Modelo-Constellation deal with the DOJ. News of the settlement agreement comes before the April 23 court deadline to report to U.S. District Court.”

Apparently, “[t]he agreement is close to the one A-B revised in February, selling the big Piedras Negras brewery to Constellation and allowing them to some time to expand that facility to brew all of US Modelo beers (and any others Constellation wants to brew there). But the agreement also includes ‘certain distribution guarantees for Constellation in the United States.'” 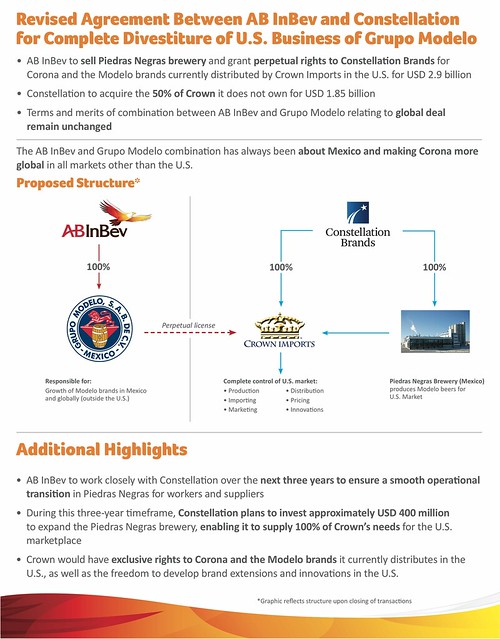 AB InBev to sell Piedras Negras brewery and grant perpetual rights to Constellation for Corona and the Modelo brands in the U.S. for USD 2.9 billion

Constellation to acquire 50% of Crown it does not own for USD 1.85 billion

Anheuser-Busch InBev (Euronext: ABI) (NYSE: BUD) and Constellation Brands, Inc. (NYSE: STZ, STZ.B) today announced a revised agreement that establishes Crown Imports as the #3 producer and marketer of beer in the U.S. through a complete divestiture of Grupo Modelo’s (BMV: GMODELOC) U.S. business. The transaction establishes Crown as a fully owned entity of Constellation, and provides Constellation with independent brewing operations, Modelo’s full profit stream from all U.S. sales, and rights in perpetuity to the Grupo Modelo brands distributed by Crown in the U.S.

As part of AB InBev’s acquisition of the 50% of Grupo Modelo it does not already own, AB InBev has agreed to sell Compañía Cervecera de Coahuila, Grupo Modelo’s state-of-the-art brewery in Piedras Negras, Mexico, and grant perpetual brand licenses to Constellation for USD 2.9 billion, subject to a post-closing adjustment. This price is based on an assumed 2012 EBITDA of USD 310 million earned from manufacturing and licensing the Modelo brands for sale by the Crown joint venture, with an implied multiple of approximately 9 times. The sale of the brewery, which is located near the Texas border, would ensure independence of supply for Crown and provides Constellation with complete control of the production of the Modelo brands for marketing and distribution in the U.S.

AB InBev and Constellation have agreed to a three-year transition services agreement to ensure the smooth transition of the operation of the world-class brewery, which is fully self-sufficient, utilizes top-of-the-line technology and was built to be readily expanded to increase production capacity. During this 3 year timeframe, Constellation plans to invest approximately USD 400 million to expand the Piedras Negras facility, which will then enable it to supply 100% of Crown’s needs for the U.S. marketplace. Today, Piedras Negras fulfills approximately 60% of Crown’s current demand.

As previously announced on June 29, 2012, AB InBev has agreed to divest Grupo Modelo’s 50% stake in Crown, the joint venture between Modelo and Constellation, that currently imports and markets Modelo’s brands in the U.S., to Constellation. The transaction value remains USD 1.85 billion, providing Constellation 100% ownership and control of Crown.

Carlos Brito, Chief Executive Officer of AB InBev, commented, “The AB InBev and Grupo Modelo transaction has always been about Mexico and making Corona more global in all markets other than the U.S., where the brands will be owned and managed by Constellation. We are pleased to have reached this revised agreement that preserves the merits of the Grupo Modelo transaction while allowing us to move expeditiously to the Modelo integration process and the capture of approximately USD 1 billion of synergies, up from our original estimate of USD 600 million.”

Rob Sands, President and Chief Executive Officer of Constellation Brands, said, “The revised agreement with AB InBev will make Constellation’s Crown beer division a fully independent competitor and the third largest producer and marketer in the U.S. beer industry. This is a transformational acquisition for our company as we will hold perpetual rights to Corona and the Modelo brands distributed by Crown in the U.S. We will have autonomous control of production, distribution, marketing and promotion of these brands in the U.S. Bill Hackett, President of Crown, and his management team have decades of experience in the beer industry with the iconic Modelo brands. I am confident that all Constellation and Crown stakeholders, including our valued wholesalers, shareholders and employees will see the benefits of this amended agreement.”

Should be all over but the shouting at this point.

NOTE: This NOT their official new logo, I made this up as a parody.

After a lengthy struggle where apparently one neighbor refused to willingly let his new neighbor build on the adjacent property in a way that was approved by nearly every governmental and environmental agency, Lagunitas owner Tony Magee’s plans for the land he owns in Tomales Bay was finally approved by the California state Coastal Commission in a 7-2 vote yesterday. The property is in the unincorporated town of Marshall in western Marin County. 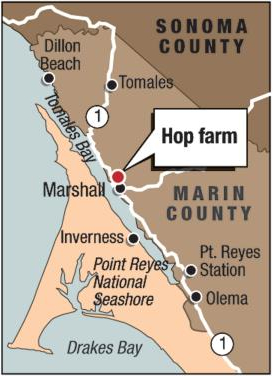 According to the Marin IJ, “The project, overlooking the east shore of Tomales Bay at the northwest corner of 17990 Highway 1, includes a residence, garage, brandy distillery producing about 280 gallons a year, an equipment barn, shed, hops shelter, two sheep shelters, a greenhouse, a new well, special wastewater treatment and related improvements. Three public tours for up to eight people each will be offered for four hours on Saturdays. Brandy will be offered for sale to those on tours, but no tastings will be allowed.”

“Magee and one employee plan to cultivate hops on 6 acres and English dessert grapes on 6 acres, and graze about 35 pair of lambs and ewes on 50 acres. Other livestock would include 100 chickens.” Five years ago, almost to the day, I wrote about Lagunitas planting hops on this same bit of land, in Lagunitas Plants Hops in Tomales Bay, and this was the view at that time. 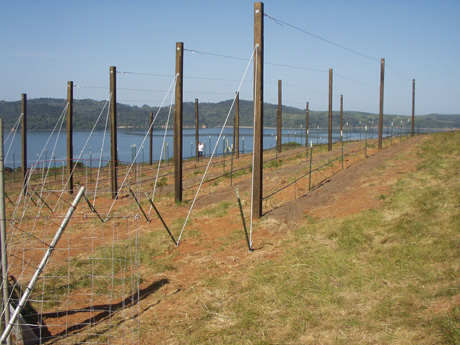 So the brandy should be interesting; micro-distilling is certainly a hot trend lately. I’m sure the hops they’ll be growing will be for Lagunitas beer, but I wonder if the 6 acres of grapes will be used for the brandy? It’s seem likely, but we’ll have to wait and see. I assume it will be a while before there’s any brandy to taste.

But I think my favorite part of this story is that in the headline, the newspaper refers to Lagunitas owner Tony Magee as a “beer baron.” Lagunitas has certainly become one of the bigger small breweries, but I’m not sure they’ve ventured into “beer baron” territory. Either way, I don’t think I’ll be able to not think of Tony as a beer baron in the future. I recently did a feature profile of Magee in the latest issue of Beer Connoisseur if you want to learn about Tony and Lagunitas. If only I’d known then that he was a beer baron.