Tuesday’s ad is for Budweiser, from the 1951. Showing a couple wearing near-matching outfits, and certainly the exact same apron, with the man having constructed a gadget to do as little work as possible while the meat on the grill cooks. Check out his socks, and the white bucks. They never quite explain what the “Something more than Beer” might be, but apparently it’s “The Companion of Contentment.” 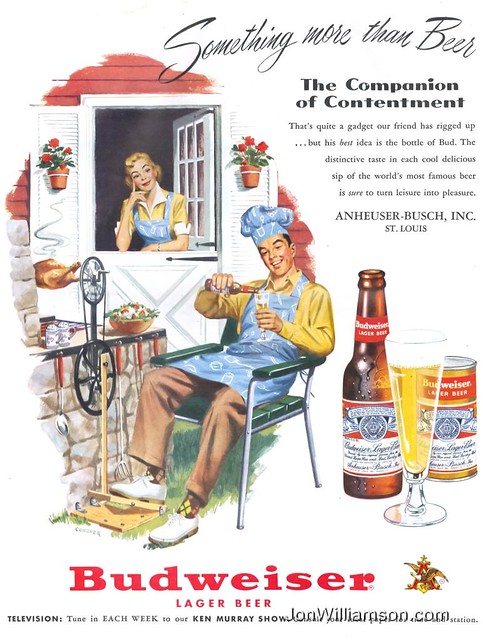 Join us this Thursday for what’s shaping up to be a fun evening of Hops and History at the former U.S. Mint building in San Francisco. The event is being put on by Flipside, a San Francisco History Events Group, in conjunction with the San Francisco Museum and Historical Society. The Society is currently “undertaking the restoration of San Francisco’s landmark Old Mint to house the future San Francisco Museum at the Mint,” and in the meantime is using the space to hold local history-themed events. Flipside worked with the San Francisco Brewers Guild — and I helped a little bit — but especially SF Brewers Guild executive director Brian Stechschulte to create an evening that includes a program of talks about the history of beer in the city, and also includes a gallery showing of San Francisco breweriana on loan from my friend Ken Harootunian, along with some pieces from Anchor Brewing. Here’s what will be going on during the event, which takes place from 6:30 p.m. until 9:30:

Tickets are $30 and can be purchased online at eventbrite. Here’s what your ticket includes:

Join us Thursday for Hops & History. See you then.

Today’s infographic tackles the question of Which Countries Consume The Most Alcohol? It was created by Confused.com using information from the World Health Organization.