Monday’s ad is for the Peter Doelger Brewing Co., from 1916. Peter Doelger was a New York brewery founded in 1859. It returned after prohibition ended, but quickly closed in 1937. The ad is just a couple of years before prohibition and shows how, right up to the end, many breweries were trying to convince people that hard liquor was the problem and, as their tagline says, “BEER is the PURE TEMPERANCE drink.” It didn’t work. 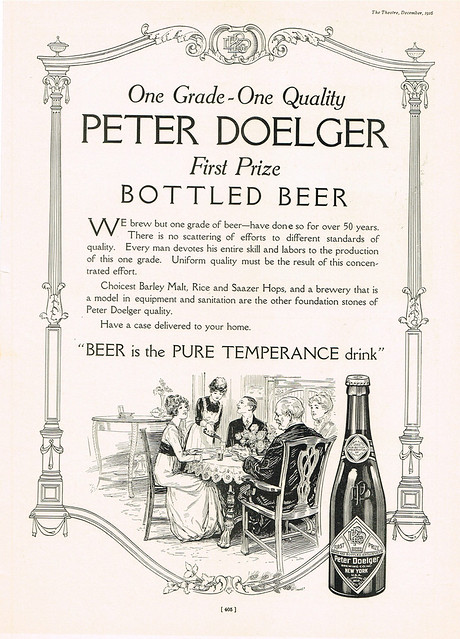 As Mississippi’s ban on homebrewing was lifted today, for the first time since Prohibition made brewing illegal in 1919, homebrewing is finally allowed in all fifty states. My only comment is it’s about damn time. That a supposed clerical error — a typo — made home winemaking legal after prohibition ended while keeping homebrewing illegal is the biggest anti-alcohol bullshit move of all-time, especially when you consider it took a full seventy years to correct that “typo,” at least for all states. The American Homebrewers Association released a statement this morning, as did the Brewers Association:

Unifying the United States homebrew community has long been an aspiration of the American Homebrewers Association (AHA), and we are proud to announce this goal has been achieved with the help of countless dedicated homebrewers and AHA members like you. July 1, 2013 marks the day Mississippi lifts its homebrew restriction, unifying homebrewers in all fifty states for the first time since before prohibition.

Beer history in the United States region predates the very existence of the country as we know it. Native peoples of the Western Hemisphere produced a watery maize-beer, a pre-cursor to modern American adjunct beer, and as the earliest explorers settled down in the New World, America’s contemporary brewing culture was born.

“From our nation’s founders to our current President, this country has a long and storied tradition of homebrewing,” said AHA director Gary Glass.

Even after prohibition was eradicated with the implementation of the 21st Amendment in 1933, homebrewers would still be criminals in the eyes of the federal law for over four-and-a-half decades. President Jimmy Carter signed a bill that went into effect on February 1, 1979 federally legalizing homebrewing, but it remained up to each state to determine their individual alcohol policies, including home beer production. Over the course of the next forty-six years, states adopted legislation, permitting the making of beer at home.

It’s terrific news that finally homebrewing is permitted in every state. It’s been a long time coming. 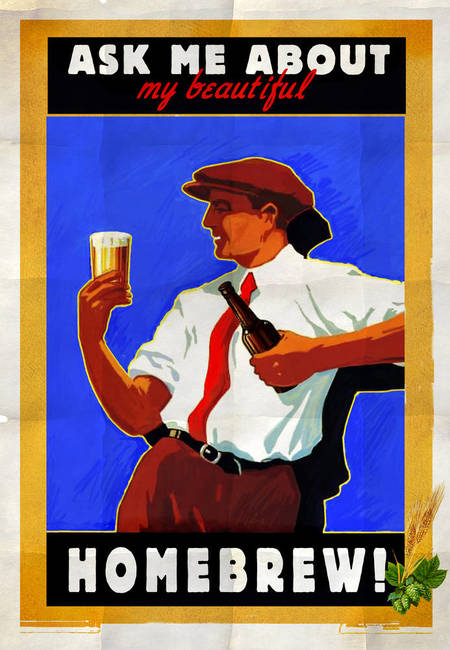 Lifehacker had an interesting piece on whether caffeine or alcohol was better to help someone “be more creative and get work done.” The title, Drink Beer for Big Ideas, Coffee to Get Them Done, sort of gives it away, but it’s worth a read to see how author Mikael Cho comes to that conclusion. 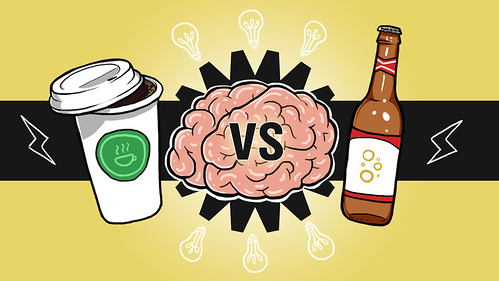 Today’s infographic highlights Canadian Beer, and was created by the Brewers Association of Canada. In honor of Canada Day, which is celebrated today by our friends, neighbors, partners and allies to the north, I thought we should also celebrate Canadian beer, as well.

Today’s infographic is about The Healthiest Alcoholic Drinks, and was created by Policy Expert, a British insurance website. I hate the use of a calories as a measure of health, it makes no sense to me. Figure out how many calories you want and then do the math. Don’t pick the stuff with the lowest calories, especially if doing so means sacrificing flavor. Drink less, but drink better. But in the next chart they’re a little more reasonable, and it’s great to see in the “health facts” the statement that drinking in moderation tends to result in your living longer than folks who either abstain or drink too much.