Thursday’s ad for beer generally, from the 1950s. It was created for the Brewers Society, presumably a brewing industry trade organization in Great Britain. It appears that the Brewers Society became the British Beer & Pub Association in the 1990s. A quick search reveals that they did a series of ads in the 1950s using a tagline referring to beer as “The Best Long Drink in the World.” Hopefully some of British friends can explain what the hell that means? 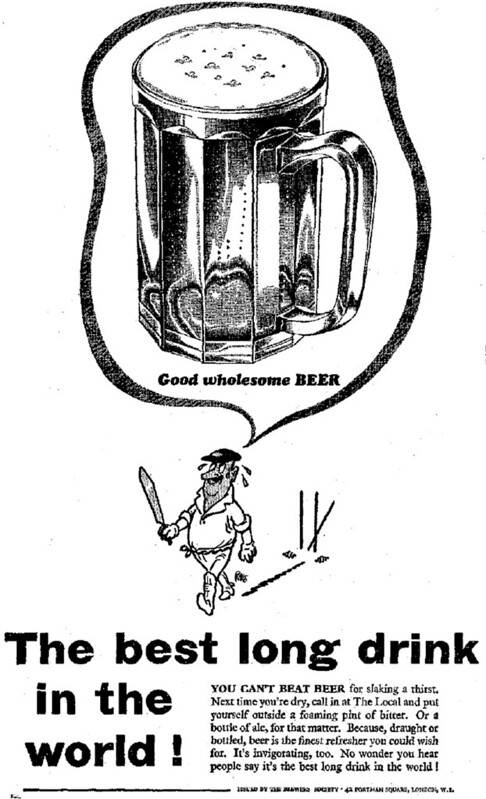 I know governments have become increasingly beholden to business interests in my lifetime, but the idealist in me is unable to just be okay with that. It’s certainly true here in the U.S., where politicians are bought and sold, and the interests of ordinary folks rarely count for much in political decisions. And that’s unlikely to change while corporations are essentially immortals with all of the rights of people and none of the consequences or responsibilities, and whose profits have been declared free speech that can be used to influence our politics. Apparently Mexico’s government is similarly business-oriented. According to a story in today’s Wall Street Journal, “Mexico’s top brewer said Thursday it reached an agreement with the country’s anti-trust authority to limit its sales exclusivity contracts with corner stores, bars and restaurants, allowing more room for craft brewers and other players in a lucrative market split by Anheuser-Busch InBev’s Grupo Modelo unit and Heineken N.V.’s Cerveceria Cuauhtemoc Moctezuma.”

In a world where people mattered, a government would tell companies what the rules are and expect them to follow them. Negotiations would be, and frankly should be, unnecessary. But that’s not the way the world works anymore, if indeed it ever did.

More from the Journal piece:

Modelo said in a statement it would cap such agreements to no more than 25% of its points of sale, with the aim of reducing that number to 20% by 2018. The brewer said it would also allow craft brewers to sell their beers in bars and restaurants where Modelo has locked in exclusive pouring terms.

The Mexican beer market, the world’s fifth-biggest according to Euromonitor, is a virtual duopoly, with Modelo brands like Corona claiming around 58% of the 67 million hectoliters of brew sold in Mexico each year, while Cerveceria Cuauhtemoc brands like Tecate account for 41%.

Around half of the beer sold in Mexico each year is channeled through small convenience stores, many of which agree to sell only one of the two brewers’ brands in exchange for branded awnings, signs or refrigerators, as well as discounts on beer purchases, credit and even assistance with local permits.

The country is Heineken’s largest market, accounting for about 16% of sales, while it represents around 13% of AB InBev’s pro forma sales, according to Credit Suisse.

Nice that Modelo will “ALLOW craft brewers to sell their beers in bars and restaurants.” How magnanimous. While the Wall Street Journal, itself as pro-business as they come, ignored the reasons for Modelo’s change of heart, Beer Business Daily reveals why they’ve agreed to soften their monopoly. It’s because the Mexican Federal Competition Commission ruled, 4-1, “that future exclusive contracts that Cuauhtemoc and Grupo Modelo have with retailers be limited in nature.” If they don’t, they could be fined up to 8% of their total income. According to Harry, currently the two biggest Mexican brewery’s “exclusive contracts with retailers account for about 85% of total volume.”

The CFC ruled that craft brewers (such as Cerveceria Minerva and Primus) that manufacture beer in Mexico (under 100m hectos a year) should have unfettered access to restaurants, bars, and cantinas, and that big brewers’ exclusive contracts with accounts should not exceed 25% of the total outlets they do business with, which is reduced to 20% over five years. Current contracts are allowed to continue in effect without change until they expire.

I find it odd that Heineken apparently responded with a press release saying “that it will abide by the new rules and ‘standardise and simplify some of our future contracts with customers.'” How nice that they let us know they’ve agreed to follow the law. That’s what drives me crazy about the large multinational corporations with economies bigger than many nations. But at least it’s some good news for Mexico’s smaller breweries and their burgeoning craft beer scene.

Today’s infographic is part two of three, created by Floating Sheep in 2010, using data collected in 2008. It’s from a post entitled the Beer Belly of America. The second map shows the “absolute mentions of bars in Google Maps directory.” Essentially it shows the location of every bar in America, and where the concentration of them is throughout the country. 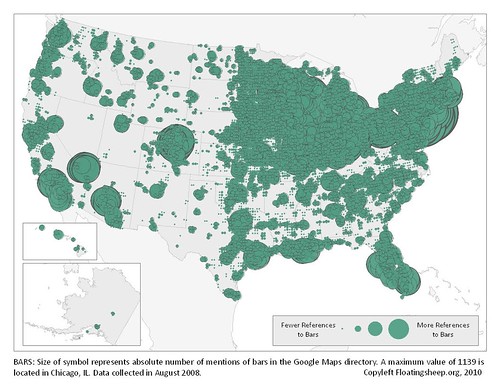