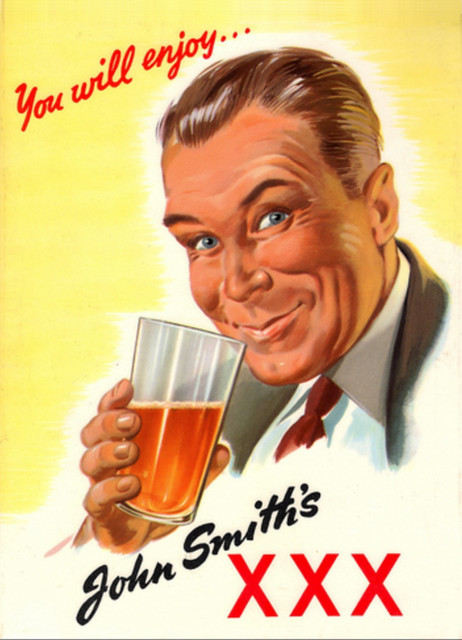 The CNBC show Closing Bell had Brewers Association Craft Beer Program Director Julia Herz on the program earlier today. Despite the host showing some ignorance of beer and asking a few hostile questions, Julia held her own and did beer proud.

According to the UK Telegraph, a worldwide effort is underway to create Synthetic Yeast, which scientists believe will allow brewers to “make beer cheaper and stronger.”

Researchers, who have been awarded £1 million of government funding for the project, will first attempt to recreate a slimmed down version of Saccharomyces cerevisiae, the yeast used in the brewing industry to ferment beer.

It will be the first time a genome has been built from scratch for a eukaryotic organism, the branch of the evolutionary tree that includes plants and animals.

The scientists then aim to redesign parts of the yeast genome so that it can perform functions that are not possible naturally.

Professor Paul Freemont, from the centre for synthetic biology and innovation at Imperial College London who is helping to lead the British part of the project, said they could help make yeast more efficient so they required less energy and could tolerate more alcohol before dying, allowing beer to be made stronger.

He said: “The brewing industry is very interested in this project for any new opportunities it may present as they use yeast to manufacture beer.

“One of the aims of the project is to develop this yeast strain as a vehicle that you can put in new chemical pathways and directly manipulate it in a way that is not possible at the moment.

“Clearly there are strains of yeast that are highly resistant to alcohol, but they all die off as the alcohol gets higher, so making more alcohol resistant strains will be very useful for that industry in terms of cost value.

“Strains that are metabolically more optimal and don’t require as much energy will also be useful.”

The synthetic yeast project, also known as Sc2.0, will draw together expertise from around the world.

I can’t quite decide yet whether I think this is a good idea, offering brewers many more choices and opportunities to create unique beers or a Frankenstein moment of science going too far in manipulating an essentially natural process. I guess time will tell. 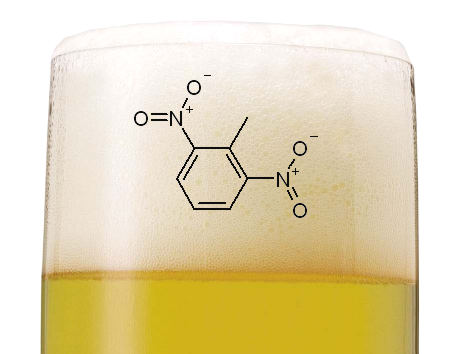 I just saw this interesting item on Drinks Business, a European news organization covering … well, the drinks business. When I think of the beer Costco sells, I tend to think of those ginormous 30-packs of megabrand cans or bottles. Many of those multi-packs were created just for Costco, Sam’s Club and other warehouse chains. But according to the article, “Costco has announced that craft beer now accounts for 30% of the company’s total beer sales.” That’s over 4-1/2 times the national average and over twice California’s market share. Impressive. 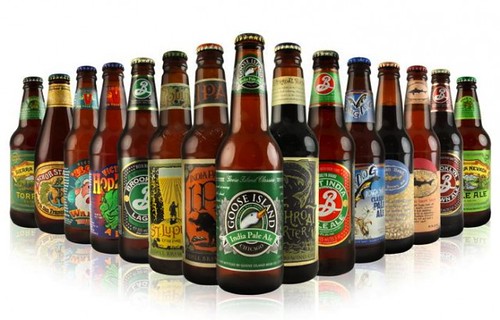 Today’s infographic, an overview of Craft Beer, Taking Over America’s Taste Buds, is not strictly about Ohio, but its creator, Molly Denning is from Columbus and created it as an Ohio State school project to be used in the Craft Beer Village at the Bunbury Music Festival, which begins today in Cincinnati. 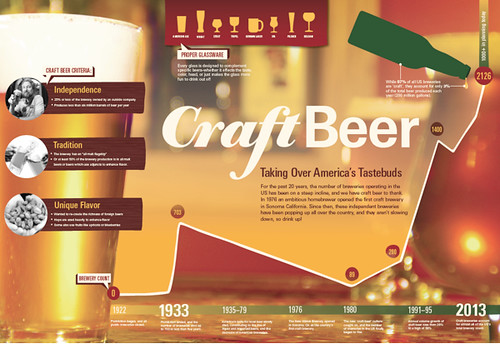 Today’s infographic is part three of three, created by Floating Sheep in 2010, using data collected in 2008. It’s from a post entitled the Beer Belly of America. The third map shows a more normalized version of yesterday’s map, showing the “relative mentions of bars in the Google Maps directory,” which was accomplished using the average number of bar mentions. 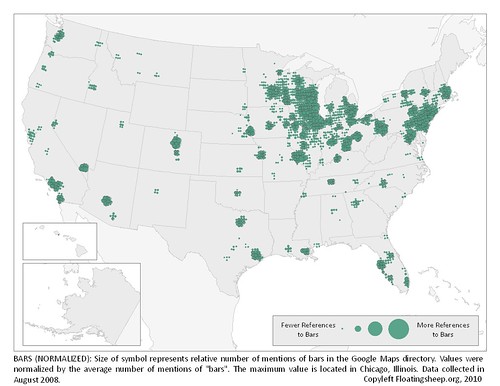