Monday’s ad is yet another one for Pabst Blue Ribbon, this one from 1958. Featuring an artist painting what looks like something abstract, or possibly a terrible landscape, though curiously there’s a woman on the grass under his easel with a tray of food and a glass of beer. He’s apparently taking a break with his own beer and a smoke … or maybe that’s the way he paints. Maybe it’s just me, but his posture makes him look like quite the schlub. 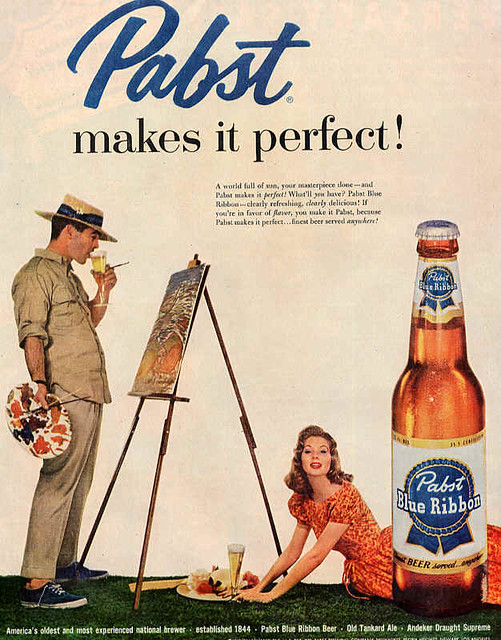 You probably saw this last week, but just in case, the Brewers Association released the preliminary mid-year numbers on how beer sales are going so far in 2013. It’s probably no surprise to most that the news is good, with double-digit growth once more, a common story these days.

It’s nice to see the steady increases over the last five years. 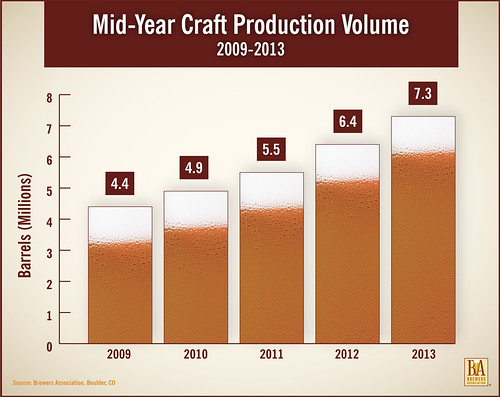 The number of breweries also continues the meteoric rise of late, with latest count standing at an amazing 2, 538.

There are 2,538 breweries operating in the U.S. as of June 30, 2013, an increase of 446 breweries since June 2012. The BA also lists an additional 1,605 breweries in planning at the year’s midpoint, compared to 1,252 a year ago. As of June 30, 2013, the count of craft breweries was at 2,483, showing that 98 percent of U.S. brewers are craft brewers. Craft brewers currently employ an estimated 108,440 full-time and part-time workers, many of which are manufacturing jobs, contributing significantly to the U.S. economy.

“More breweries are currently operating in the U.S. than at any time since the 1870s.” [Director of the Brewers Association, Paul] Gatza added. “With each new brewery opening, American craft brewers are reinforcing the U.S.’s position as the world’s most diverse brewing nation. It’s a very good time to be an American beer lover.”

Today’s infographic is all about Yeast Starter, and how to do a starter. It was created by Salt City Brew Supply in Midvale, Utah, and was originally posted to their Google+ page and their blog, too.