Tuesday’s ad is still another one for Pabst Blue Ribbon, this one from 1963. Showing a pretty spiffy rec room, or hobby den, and an impressive DIY toy yacht in the process of being built. But he’s taking a break from his “leisure-time activities” to enjoy a beer with his wife. 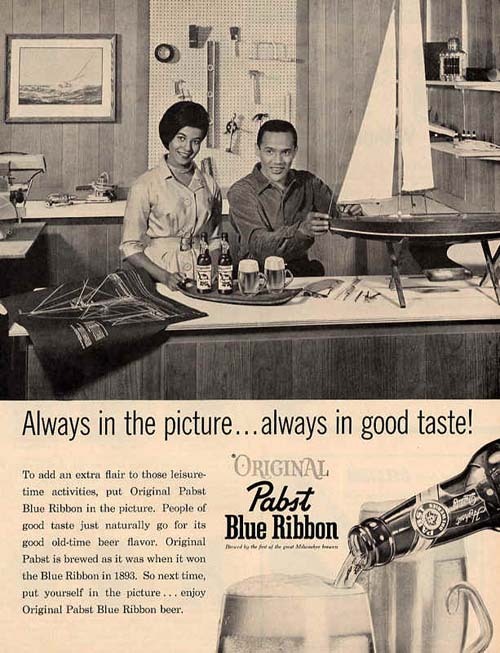 Today’s infographic is entitled Coffee vs. Beer, and was created by On.Q Marketing. Last month, I came upon a similar article discussing which One Better Enhances Creativity. Hint: it’s beer!

Well I can’t say that seems to be the case from my personal experience, but a new Gallup Poll is being spun that way, especially in an Atlantic article, Why Are American Drinkers Turning Against Beer? This particular Gallop Poll is done each year — since at least 1939 — and what you have to remember is that it’s a popularity poll, not necessarily a scientific one. The poll itself is conducted in a proper manner, but it’s asking people to “say what they drink” or “what they prefer.” And that’s far different from what the actual sales indicate. The last time I wrote about this was in 2010, when that year the Latest Gallup Poll Reveals Drinking At 25-Year High With Beer #1. 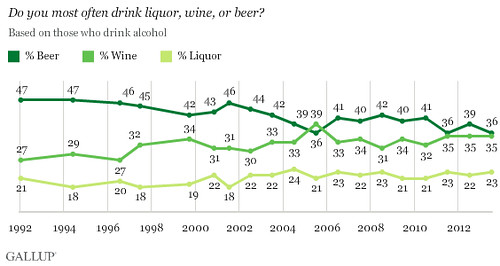 This year, the big story is “per capita consumption of beer down 20 percent,” as is overall production of beer. But as they continue to lump all beer together, when clearly patterns of drinking beer are changing, by keeping the poll simple they miss some of what’s really going on.

As my “beer brother” Lew Bryson commented. “Craft beer has been on a tear since 2002; latest figures have it up 15% annually (volume, 17% on $ sales). Volume sales of the majors are down, and trending downward steadily. Wine and spirits are picking up some of that, but craft is picking up a good share. It’s also worth noting that this IS a ‘what do you like’ poll, not ‘how much do you drink’ sales numbers. Beer still wins that by a sizable margin, both on volume and $ sales.” True indeed, when I wrote about this in 2010, beer outsold beer 4 to 1, showing just how skewed the difference is between what people say they like to drink, and what they actually drink.

One curious thing I wonder about these polls, and other alcohol data generally, is why alcohol is always divided up into these three tidy boxes? And where in these categories, if anywhere, is captured the sales, preferences or what-have-you for cider, alcopops, sake and other beverages that don’t seem to fit neatly into one of the big three. Are they ignored, or lumped into one of the three? It’s seems a fairly relevant question, since cider’s on a big upswing and alcopops have had their ups and downs, but certainly have to be part of the equation, especially when it comes to the all-important 18-29 demographic. But not even the full report gives any additional clues. 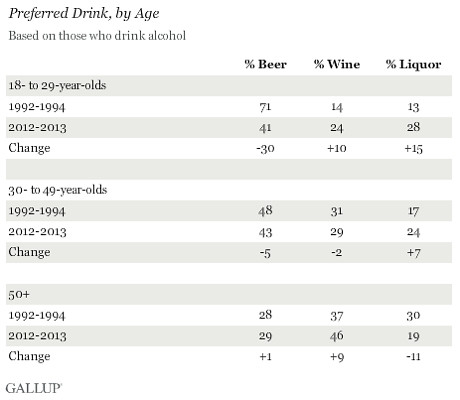 Another item that makes me question Gallup’s polling is the huge gains of bottled water. To me that has more to do with availability than anything else. It’s getting harder and harder to even find a water fountain these days, because business has figured out that people will pay for it when that have no choice.

Another explanation that didn’t ring true was that “American drinkers are more health-conscious today” and that’s led to people choosing other beverages, but even the author admits that this “does not adequately explain why Americans would turn against light beer,” as if that really is a healthy alternative. As I’ve said endlessly, low-calorie diet beer is hardly any healthier than non-light beers so that argument doesn’t hold any water … or even any watered-down beer.

Happily, the day after this story ran on the Atlantic’s website, the same author posted The Death of Beer Has Been Greatly Exaggerated, in which Derek Thompson shows that, despite the Gallop Poll, “total U.S. spending on all alcoholic beverages — both at home and at restaurants and bars — is up 27 percent since 1980 and even more since the mid-century.” 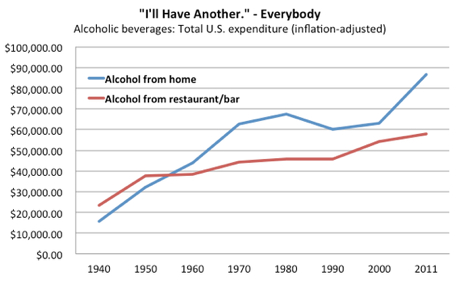 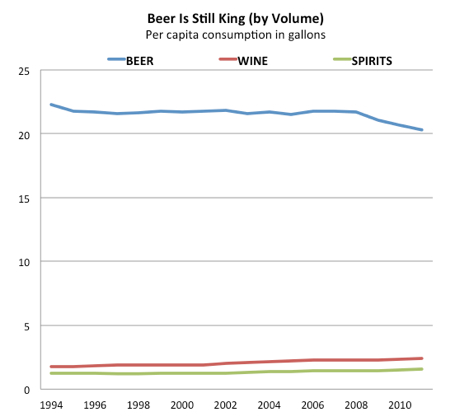 Thompson sums up his two days worth of articles:

The total amount of beer consumed by Americans is in structural decline, and there are more wine-drinkers than there used to be. But beer is still the most popular boozy beverage in America and overall sales are holding up, thanks in part to the emergence of craft beers.

Did we really need another Gallop Poll or Atlantic business writer to tell us that?