Monday’s ad is an another early ad for the Italian brewery Birra Pedavena, which closed in 1937, but reopened again in 1998 as La Bierreria Pedavena. The man struggling with the giant beer glass looks to me like he might be King Gambrinus. 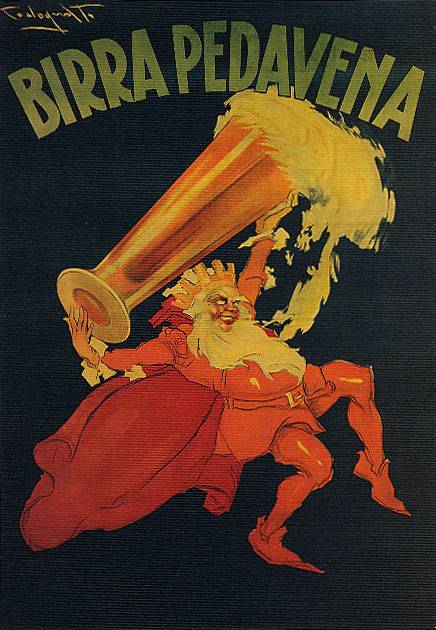 Working on another project, which I can’t yet talk about, I used some research I did for an article a few years ago about some of the gods and goddesses of beer and brewing, and ended up digging a little deeper. In the process, I put together a long list that’s hopefully, but probably in no way, a complete list of beer gods and goddesses, but is at least the biggest list I know of, with just over one hundred of them. To be fair, I made up one of them, and a couple others are bogus, but there’s still at least 100 remaining that are legitimate. Or at least they’re legitimately deities for some group of people, their connection to beer or alcohol you could question, by why bother? It’s just a bit of fun. Drink a toast to them. Because their followers believed in them, we still have beer to drink today. Enjoy.

If you know of one I missed, please send me an e-mail with as much as information as you can. If I screwed up any of the info here (and I’m confident I must have) please let me know but please bear in mind that this exercise is meant to be celebratory and fun, so please keep it civil, and remember that with ancient legends and history, accounts vary widely and I simply had to choose the stories I liked or which worked best for my purposes. I’ll keep updating the page with new gods or goddesses as I find them, and will make relevant changes that make sense, but not to this post. Instead, the most current and up-to-date version of this list will live on a permanent page, Beer Gods & Goddesses.

Long before the catholic church and related christian religions started declaring beer and brewing saints, many different civilizations and peoples had deities dedicated to beer or brewing, or some related endeavor. Below is a list of the beer gods and goddesses that I know of, along with other mythological creatures or people with an association to beer, brewing or a related aspect. Try as I might, I couldn’t find any gods or goddesses associated with either hops or yeast specifically, probably because by the time we were using them in beer, or had a better understanding of them, civilization was well past creating gods. Perhaps we need to make some up? There are also many more deities associated with water, but it’s unclear if any of them can be linked to brewing water, and many are gods of the sea, which also didn’t seem appropriate. So far, I’ve found over 100 different deities to drink a toast to, celebrate or worship with a glass of beer. If you know of one I’m missing, please drop me a line.

By Feast Days or Festivals Relating to Beer Gods & Goddesses*

*NOTE: Happily, many of the dates listed above are in fact accurate and were found through diligent research. A few, however, I had to piece together from what little I could find. This was further confounded by the fact that most ancient civilizations didn’t use our Gregorian calendar or even keep accurate records about when festivals or other celebrations took place. Some were simply “at harvest time” or in the spring, or some other vague day. In those cases, I made a command decision to fix a date that made sense. A conceit? Perhaps, but since the idea is simply to celebrate these ancient gods, goddesses and spirits who are related to brewing, I felt I should fix a date. I tried my best to choose dates that seemed to fit each god or goddess. If you know of a better one, or better still, an actual one with sources you can send me, that would be best. Cheers.

Today’s infographic was originally created for Valentine’s Day earlier this year, by Save on Brew. I picked today to feature it because it’s Women’s Equality Day. Entitled Beers The Ladies Love, it gives tips for beers to give to the lady or ladies in your life. I’m not sure about their list of “10 Top Rated Craft Beer,” and especially the three that are imports, but they’re pretty good beers, at least. And there’s not a fruit beer in the bunch. It’s certainly better than many other attempts at this sort of thing I’ve seen.