Monday’s ad is for Rheingold Beer, from 1955, and features Miss Rheingold from that year, Nancy Woodruff. She’s cozying up to a bunch of blue flowers, which she’s holding against her face, with an urban flower-seller and his outdoor shop in the background. That’s quite a wide smile she’s beaming at us in her all-pink outfit, more than five years before Jackie Kennedy made pink chic. 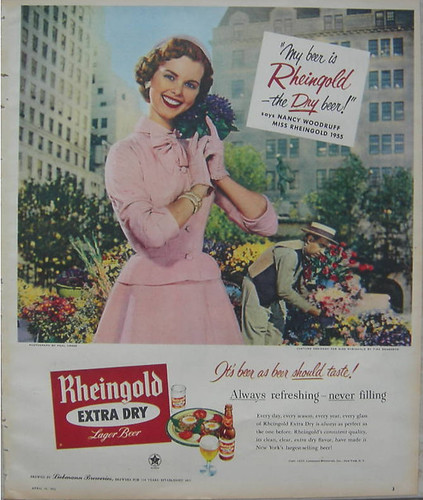 Today’s infographic, 10 Healthy Reasons To Drink Beer, was created by Brittany McKinnon, a graphic design student from Brooklyn, New York. The only downside is this is the largest version of the poster I could find. 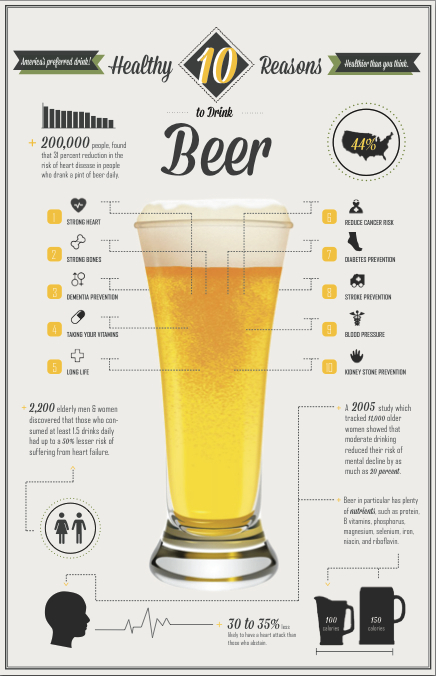 A few weeks ago, for my son’s 12th birthday, we brewed his first batch of homebrew and documented the day as Porter’s Porter Day. The beer was ready to be bottled last weekend, but we only got around to it yesterday. It went surprisingly smoothly. 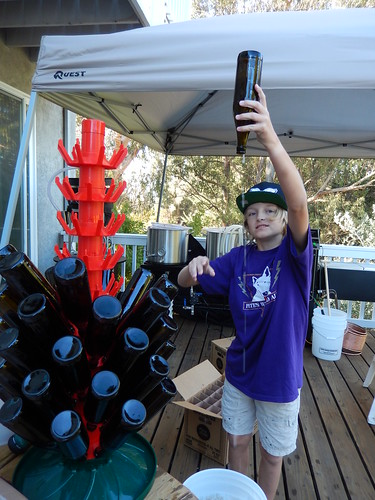 Porter having some fun while sterilizing the bottles, which Vinnie Cilurzo from Russian River Brewing was kind enough to donate. 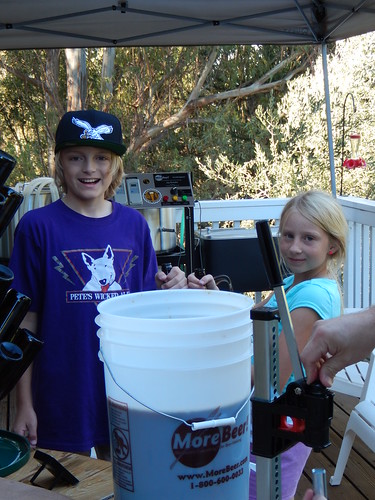 Both Porter and his little sister Alice were on hand to help. 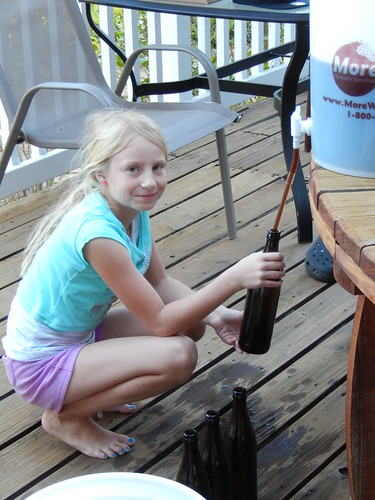 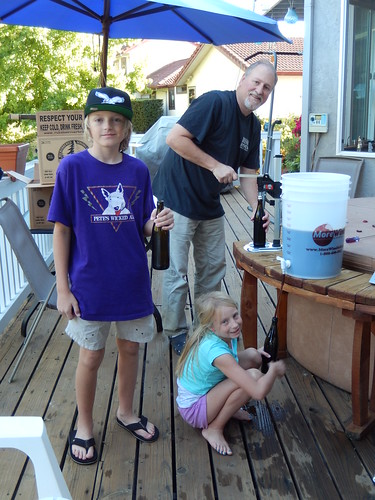 I worked the capper, but everybody contributed to the effort. 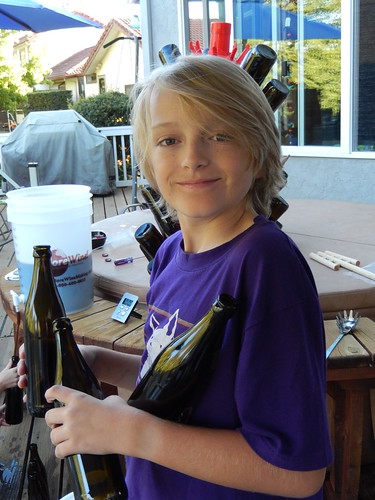 Porter kept the bottles flowing, from the drying rack to his sister. 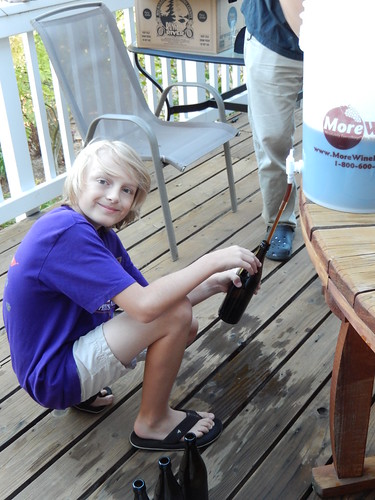 But Porter also took his turn filling bottles, too. 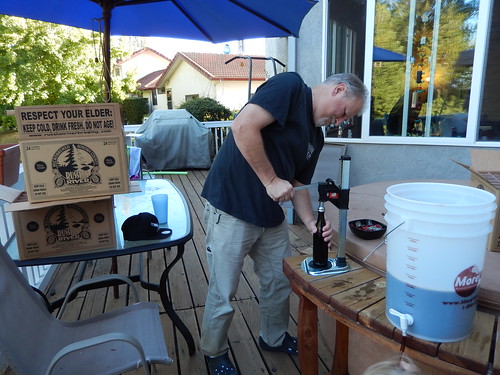 While I was really the only one who could use the capper. 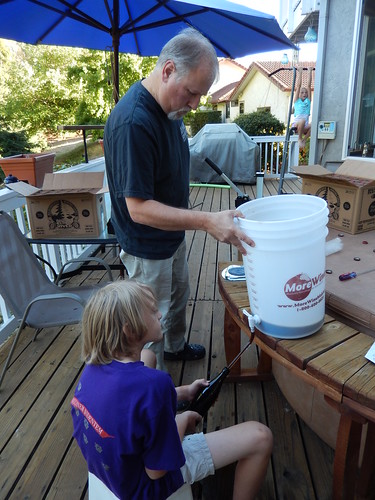 Eventually, we ran out of beer and filled the final bottle.

Our yield was about 8 gallons, which filled 57 sixteen ounce bottles, which are now bottle-conditioning in the beer cellar. In a few weeks Porter and I will be on the Brewing Network’s Sunday Show and I’ll taste the results, along with the rest of the adults on the show. Fingers crossed, hopefully it won’t suck. But either way, it’s been great fun homebrewing with my son.

Today’s infographic is a smackdown between beer and wine to discover who wins the battle royale of alcoholic beverages. It was created by Alex Hillsberg for Finances Online. The infographic itself, Beer Vs. Wine, goes through pros and cons, pluses and minuses and random factoids of each, before drawing its conclusion as to which is the superior drink.

You may have heard the news that today is “National Drink Beer Day,” a worthy addition to the canon of beer holidays, and as far as I can tell was created as recently as 2012. That’s when the National Drink Beer Day Facebook page was created, at least. Both the Facebook page and the website for National Drink Beer Day offer no insights or indeed any information whatsoever about the holiday’s origins or purpose. No matter, it seems to have captured peoples’ imagination and the day appears to have caught on. One thing I’ve learned in the 35 years that I’ve been collecting holidays is that anyone can make up a holiday, the real trick is acceptance, getting people to observe and celebrate it. But who wouldn’t want to celebrate drink beer day, something most of us already do on a daily basis the other 364 days of the year? So it’s no surprise that National Drink Beer Day and I, too, will mark the day by — wait for it — drinking a beer!

But Mental Floss had another way to observe the new holiday, and posted a fun list of 25 Amazing Facts for Drink Beer Day. You’ve probably heard many of them before, but it’s fun to see them all in one place. Pick one and drink a toast today to celebrate National Drink Beer Day.

Mental Floss also has another worthwhile beer list one telling the stories of 10 Things Created Over a Couple of Beers. Hopefully, everyone should be able to find a good reason to enjoy a beer today in those two lists.

Today’s infographic is still another poster about Oktoberfest, which began seven days ago in Munich, Germany. This one is called Oktoberfest Facts and was created by Easy Jet Holidays, a travel website.

Friday’s ad is for Michelob, from 1968. Using the double entendre tagline “Sometimes I Wonder If You Like Me For Myself … Or Just My Shape.” Are those false eyelashes on the bottle meant to make it look more female? And is that a tear dripping down its side, or merely a bead of liquid? 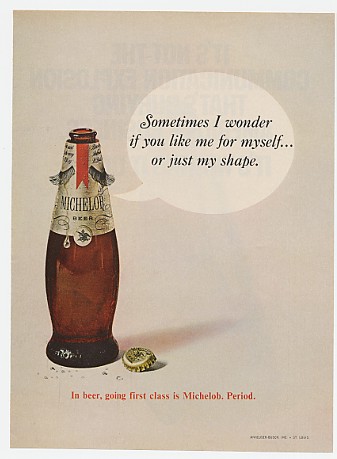 Today’s infographic is still yet another poster about Oktoberfest, which began six days ago in Munich, Germany. This one is titled simply Oktoberfest Munich and was created by Destination, a travel website. It features several factoids and then compares two other prominent Oktoberfests, one in Brazil and the other in Cincinnati.

I got an e-mail last evening from David Panton, letting me know that his short film, Oregon Brewed, is now available to watch on Vimeo. 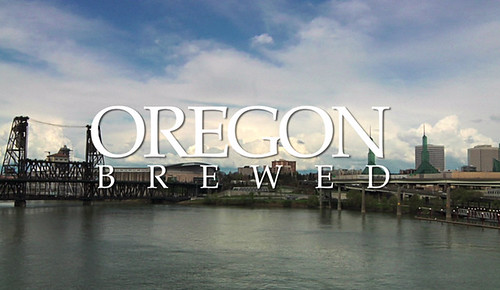 It runs just over twenty minutes, and has done well in some local film festivals. It was chosen as the Best Oregon Film at the Oregon Independent Film Festival and won “Best of Oregon” at the Oregon Film Awards. Here’s the description of the film.

Beer has made a lasting historical mark throughout history. Today in Oregon, beer continues to make history. The unique culture of brewers and beer drinkers in Oregon is an important part not only to the beer itself, but to the people that live here as well. This documentary on Oregon craft beer looks at a few different breweries all different sizes and ages, to find out what really makes beer in Oregon unique.