Friday’s ad is for Durst, from 1949, which means “thirst.” From the late 1800s until the 1960s, poster art really came into its own, and in Europe a lot of really cool posters, many of them for breweries, were produced. This poster was made to promote Swiss beer by the Swiss Brewery Association. It was created by Swiss artist Fritz Wüthrich.

And this is another version where the color is reproduced very differently and which gives it a different feel, I believe, however unintentional.

They also did a version where “Soif” is written in the sand. Soif is French for thirst so I wonder if they did several of these posters with Thirst written a variety of languages.

The Pennsylvania Gazette “was one of the United States’ most prominent newspapers from 1728, before the time period of the American Revolution, until 1800.” In 1729, Benjamin Franklin, and a partner (Hugh Meredith), bought the paper. “Franklin not only printed the paper but also often contributed pieces to the paper under aliases. His newspaper soon became the most successful in the colonies.”

On July 19, 1733, they published a piece entitled “A Meditation on a Quart Mugg.” It was generally attributed to Benjamin Franklin, and for years was published among collections of his writings. However, the current editors of the National Archives are not convinced that it was indeed written by Franklin, and “believe that the essay is not sufficiently characteristic of Franklin’s style to be attributed to him.” Plus, apparently “no external evidence of authorship has been found.” Despite the uncertainty of who wrote it, it remain an interesting, if odd, piece written from the point of view of the mug. It has held beer, among much else, but had more feelings and experienced more humiliations and bad treatment than I had ever thought about before. I must remember to thank my glassware for its service on a more regular basis. 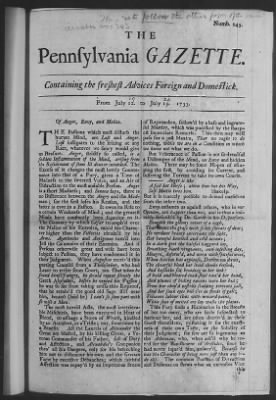 A Meditation on a Quart Mugg

Wretched, miserable, and unhappy Mug! I pity thy luckless Lot, I commiserate thy Misfortunes, thy Griefs fill me with Compassion, and because of thee are Tears made frequently to burst from my Eyes.

How often have I seen him compell’d to hold up his Handle at the Bar, for no other Crime than that of being empty; then snatch’d away by a surly Officer, and plung’d suddenly into a Tub of cold Water: Sad Spectacle, and Emblem of human Penury, oppress’d by arbitrary Power! How often is he hurry’d down into a dismal Vault, sent up fully laden in a cold Sweat, and by a rude Hand thrust into the Fire! How often have I seen it obliged to undergo the Indignities of a dirty Wench; to have melting Candles dropt on its naked Sides, and sometimes in its Mouth, to risque being broken into a thousand Pieces, for Actions which itself was not guilty of! How often is he forced into the Company of boisterous Sots, who say all their Nonsence, Noise, profane Swearing, Cursing, and Quarreling, on the harmless Mug, which speaks not a Word! They overset him, maim him, and sometimes turn him to Arms offensive or defensive, as they please; when of himself he would not be of either Party, but would as willingly stand still. Alas! what Power, or Place, is provided, where this poor Mug, this unpitied Slave, can have Redress of his Wrongs and Sufferings? Or where shall he have a Word of Praise bestow’d on him for his Well-doings, and faithful Services? If he prove of a large size, his Owner curses him, and says he will devour more than he’ll earn: If his Size be small, those whom his Master appoints him to serve will curse him as much, and perhaps threaten him with the Inquisition of the Standard. Poor Mug, unfortunate is thy Condition! Of thy self thou wouldst do no Harm, but much Harm is done with thee! Thou art accused of many Mischiefs; thou art said to administer Drunkenness, Poison, and broken Heads: But none praise thee for the good Things thou yieldest! Shouldest thou produce double Beer, nappy Ale, stallcop Cyder, or Cyder mull’d, fine Punch, or cordial Tiff; yet for all these shouldst thou not be prais’d, but the rich Liquors themselves, which tho’ within thee, twill be said to be foreign to thee! And yet, so unhappy is thy Destiny, thou must bear all their Faults and Abominations! Hast thou been industriously serving thy Employers with Tiff or Punch, and instantly they dispatch thee for Cyder, then must thou be abused for smelling of Rum. Hast thou been steaming their Noses gratefully, with mull’d Cyder or butter’d Ale, and then offerest to refresh their Palates with the best of Beer, they will curse thee for thy Greasiness. And how, alas! can thy Service be rendered more tolerable to thee? If thou submittest thy self to a Scouring in the Kitchen, what must thou undergo from sharp Sand, hot Ashes, and a coarse Dishclout; besides the Danger of having thy Lips rudely torn, thy Countenance disfigured, thy Arms dismantled, and thy whole Frame shatter’d, with violent Concussions in an Iron Pot or Brass Kettle! And yet, O Mug! if these Dangers thou escapest, with little Injury, thou must at last untimely fall, be broken to Pieces, and cast away, never more to be recollected and form’d into a Quart Mug. Whether by the Fire, or in a Battle, or choak’d with a Dishclout, or by a Stroke against a Stone, thy Dissolution happens; ’tis all alike to thy avaritious Owner; he grieves not for thee, but for the Shilling with which he purchased thee! If thy Bottom-Part should chance to survive, it may be preserv’d to hold Bits of Candles, or Blacking for Shoes, or Salve for kibed Heels; but all thy other Members will be for ever buried in some miry Hole; or less carefully disposed of, so that little Children, who have not yet arrived to Acts of Cruelty, may gather them up to furnish out their Baby-Houses: Or, being cast upon the Dunghill, they will therewith be carted into Meadow Grounds; where, being spread abroad and discovered, they must be thrown to the Heap of Stones, Bones, and Rubbish; or being left until the Mower finds them with his Scythe, they will with bitter Curses be tossed over the Hedge; and so serve for unlucky Boys to throw at Birds and Dogs; until by Length of Time and numerous Casualties, they shall be press’d into their Mother Earth, and be converted to their original Principles.

Today is the birthday of English beer writer Adrian Tierney-Jones. Adrian’s written several beer books, and writes online at Called to the Bar. I first got to know him when he was the editor for 1001 Beers You Must Taste Before You Die, to which I contributed around two-dozen entries. I’ve also seen Adrian at events in London and Belgium since then, and he’s a great person to share a pint with. Join me in wishing Adrian a very happy birthday. 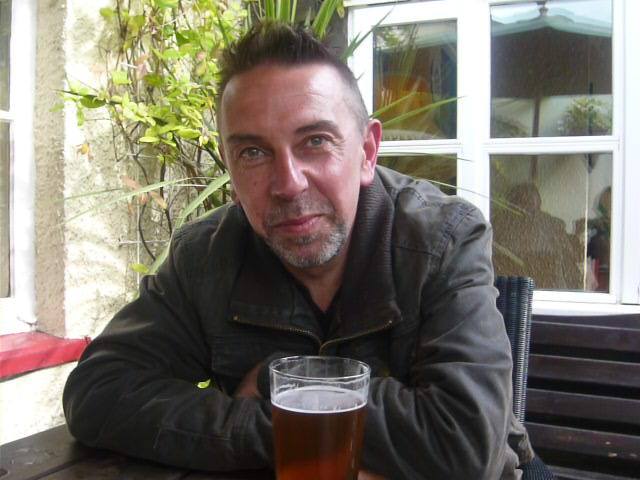 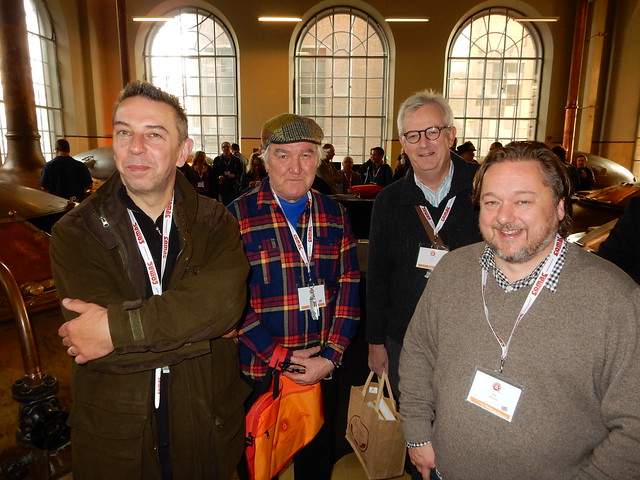 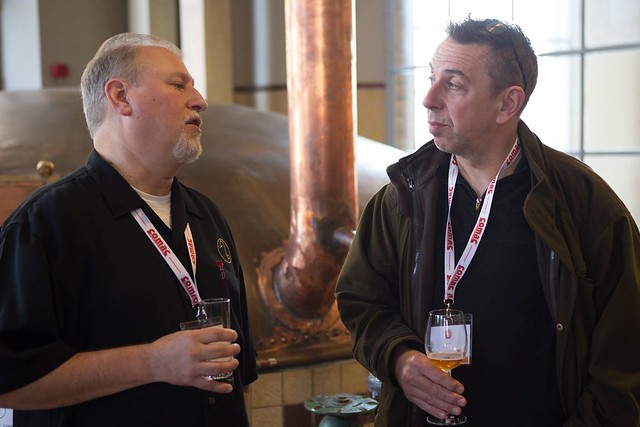 Me and Adrian having a beer and a chat in Belgium in 2014. 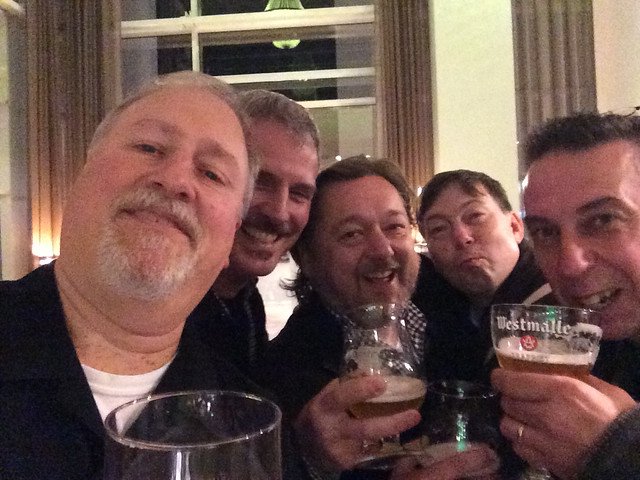