Monday’s ad is for Rodenbach, from mid-20th century. From the late 1800s until the 1980s, poster art really came into its own, and in Europe a lot of really cool posters, many of them for breweries, were produced. I’ve been posting vintage European posters all last year and will continue to do so in 2020. This poster was created for the Brewery Rodenbach, founded by four Rodenbach brothers (Pedro, Alexander, Ferdinand and Constantijn) in Roeselare which is located in West Flanders, Belgium. It was founded in 1821, but today is owned by Palm Breweries. I’m not sure who created this poster.

Today is the birthday of William B. Ogden (June 15, 1805-August 3, 1877). Ogden’s biggest claim to fame is being the first mayor of the city of Chicago, elected in 1837. But he was also a businessman, and one of the businesses he was involved in was one of Chicago’s first breweries, Lill & Diversey.

Some sources say it was the very first brewery in Chicago, but either way, it was certainly one of the earliest. It was founded by William Lill, who was later joined by partner Michael Diversey

Here’s the brewery’s story from One Hundred Years of Brewing, published in 1901:

The immense brewing interests of Chicago had their origin in the persons of William Lill and William Haas. In September, 1839, William B. Ogden, who, two years previously, had been elected mayor of the city, established Mr. Lill in business at the corner of Pine street and Chicago avenue, Mr. Haas being the latter’s assistant. The “plant” was installed in a small tenement building and the first year’s brew was about 450 barrels.

After a few years Michael Diversey formed a partnership with Mr. Lill, when Mr. Ogden withdrew his silent interest in the business. Under the management of Lill & Diversey the so-called Chicago Brewery developed into one of the most extensive establishments of the kind in the west, occupying a portion of the original site, but then covering an entire block. For many years “Lill‘s Cream Ale” was one of the most famous brands in the country. Besides being known as good business men, Lill and Diversey were noted for their benevolence and generosity, the latter being a large benefactor to the German Catholic churches of Chicago.

In 1841, Michael Diversey and William Lill bought the first commercial brewery in Chicago (Haas & Sulzer Brewery) and changed the name to the Lill & Diversey Brewery, also known as the Chicago Brewery. The two men saw huge success and by 1861 were producing 45,000 barrels of beer a year and employing over 75 men. Famous for “Lill’s Cream Ale,” by 1866 the brewery had sprawled to over two acres and four stories high. The Water Tower Pumping Station, which still stands today, was put in directly across the street.

Serving two terms as a Chicago Alderman (1844-45; 1856-1868), Michael Diversey also donated a small plot of land where a Catholic church for fellow German immigrants was built. St. Michael’s was the tallest building in Chicago until 1885 when The Old Chicago Board of Trade building was completed. Known as a great city leader and keeping company with the likes of Joseph Sheffield and William Ogden, Michael Diversey was integral in bringing great growth to Chicago.

However, Diversey died in 1869, and Lill continued to run the brewery. Till the Great Fire of 1871 wiped it out and Lill lost everything. The brewery never re-opened and Lill passed away in 1875.

Most of Ogden’s biographies don’t even mention his affiliation with the brewery at all. See, for example his Wikipedia page, the WBEZ Chicago blog and the Encyclopedia of Chicago. His business with the brewery was apparently a pretty minor investment for him, and he was much more heavily involved in many other projects and businesses. Most accounts state that Ogden was a silent partner in the brewer. But in Gregg Smith’s “Beer In America: The Early Years—1587-1840,” he claims “that the mayor was very much involved in the business, and not just a silent partner: he wanted to ensure that the brewery’s hops came from New York’s Finger Lakes region.” Which makes some sense; Ogden was born in upstate New York.

Today is as good a day as any to celebrate the birthday of John Lofting (1659–June 15, 1742). Like many people born centuries ago who weren’t royal or otherwise well-born, we don’t know the exact day he was born, but we do know that he died today. Lofting was a Dutchman who lived in London as an adult, and patented several devices, the most famous of which was the fire engine, but he may also have been responsible for the beer engine. 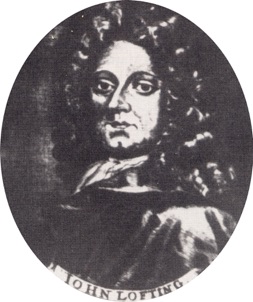 Originally Jan Loftingh, John Lofting was an engineer and entrepreneur from the Netherlands. His parents were Herman and Johanna. He moved to London, England, before 1686. He patented two inventions being the “sucking worm engine” (a fire engine) and a horse-powered thimble knurling machine. His mill was set up in Islington, where Lofting Road is named after him. However, in or about 1700, he moved his main operation to Great Marlow in Buckinghamshire to take advantage of the River Thames’ ability to turn a water wheel which improved productivity, enabling the production of over 2 million thimbles per year. 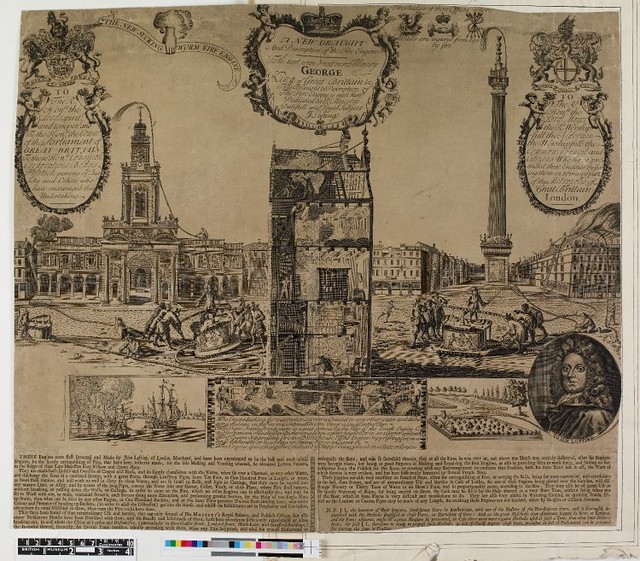 The Sucking Worm Engine, from the British Museum.

And while Joseph Bramah patented the first practical beer engine, Lofting’s design made it possible for Bramah to build on and create his. Although there’s little I could find specific about Lofting’s invention, it is mentioned in the Wikipedia entry for the beer engine:

A beer engine is a device for pumping beer from a cask in a pub’s cellar.

The beer engine was invented by John Lofting, a Dutch inventor, merchant and manufacturer who moved from Amsterdam to London in about 1688 and patented a number of inventions including a fire hose and engine for extinguishing fires and a thimble knurling machine as well as a device for pumping beer. The London Gazette of 17 March 1691 stated “the patentee hath also projected a very useful engine for starting of beers and other liquors which will deliver from 20 to 30 barrels an hour which are completely fixed with brass joints and screws at reasonable rates.”

The beer engine is normally manually operated, although electrically powered and gas powered pumps are occasionally used; when manually powered, the term handpump is often used to refer to both the pump and the associated handle.

The beer engine is normally located below the bar with the visible handle being used to draw the beer through a flexible tube to the spout, below which the glass is placed. Modern hand pumps may clamp onto the edge of the bar or be mounted on the top of the bar.

A pump clip is usually attached to the handle by a spring clip giving the name and sometimes the brewery, beer type and alcoholic strength of the beer being served through that handpump.

The handle of a handpump is often used as a symbol of cask ale. Keg beer dispensers usually feature illuminated countertop fittings behind which a handle opens a valve that allows the gas pressure in the keg to force beer to the attached spout. 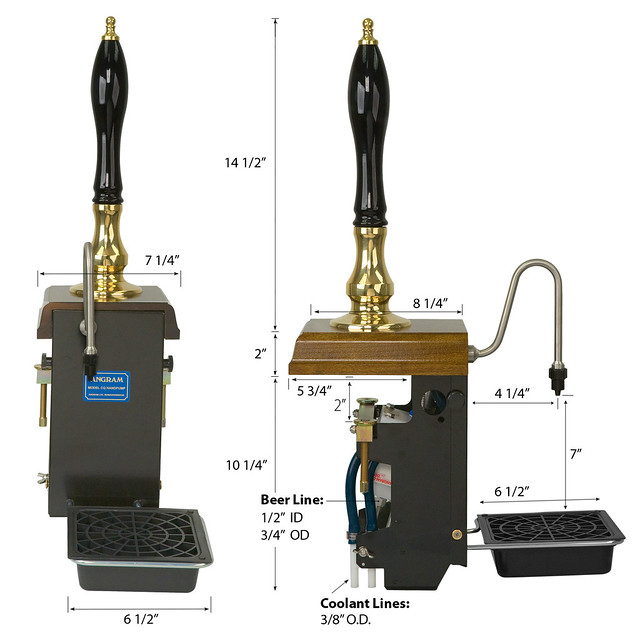 Today is the 59th birthday of Ron Lindenbusch, who’s been with the Lagunitas Brewery since the very beginning. I first met Ron and founder Tony Magee when I visited the brewery in its original location in the mid-1990s. Ron has been a huge part of bringing the brewery along to where it is today, and is a terrific person and a good friend. Join me in wishing Ron a very happy birthday. 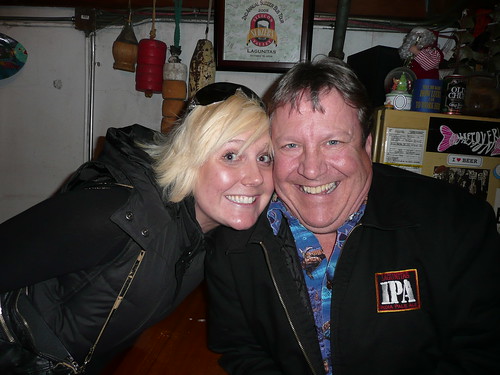 The Beer Wench, Ashley Routson, with Ron at a Tweet-Up at Lagunitas a couple of years ago. 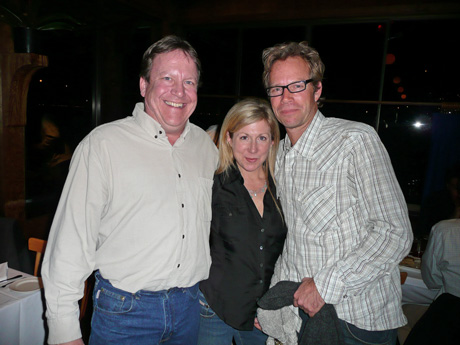 At a beer dinner at Horizons in Marin County, with Dean Biersch and Lynn, the chef at Hopmonk Tavern, Dean’s then-new venture in Sebastopol. 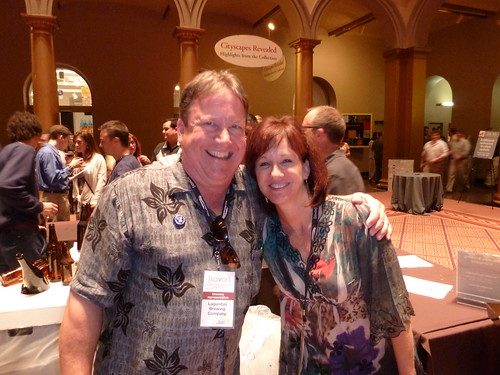 Ron with Lagunitas owner Tony Magee’s sister Karen, who rep’s Lagunitas in the Chicago area, at SAVOR several years ago in Washington, D.C. 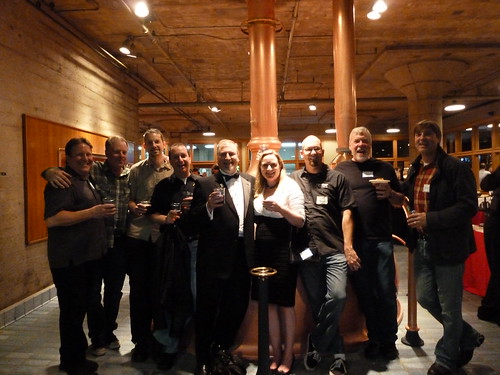