Sunday’s ad is for “Rheingold Beer,” from 1948. This ad was made for the Rheingold Brewery, which was founded by the Liebmann family in 1883 in New York, New York. At its peak, it sold 35% of all the beer in New York state. In 1963, the family sold the brewery and in was shut down in 1976. In 1940, Philip Liebmann, great-grandson of the founder, Samuel Liebmann, started the “Miss Rheingold” pageant as the centerpiece of its marketing campaign. Beer drinkers voted each year on the young lady who would be featured as Miss Rheingold in advertisements. In the 1940s and 1950s in New York, “the selection of Miss Rheingold was as highly anticipated as the race for the White House.” The winning model was then featured in at least twelve monthly advertisements for the brewery, beginning in 1940 and ending in 1965. Beginning in 1941, the selection of next year’s Miss Rheingold was instituted and became wildly popular in the New York Area. Miss Rheingold 1948, was Pat Quinlan. I wasn’t able to find out very much biographical information, only that she was possibly born in 1928 in Suffolk County, New York. In this ad, from July, she’s on a sailboat, and the nautical flags she’s hoisting spell out “D-R-Y,” as in Rheingold, the Dry Beer.

Today is the birthday of Chris Crabb, who does public relations for the Oregon Brewers Festival and other clients in the beer industry through her agency, Crabbsoup. If you’ve had any dealing with OBF, you’ve undoubtedly encountered Chris, because she does an amazing amount of work to get OBF up and running smoothly every year. Plus, she does all that hard work while keeping a smile on her face the entire time. Join me in wishing Chris a very happy birthday. The Always Delightful Chris Crabb at the OBF Parade in 2009. Chris with Lisa Morrison at OBF several years ago. Today is the 62nd birthday of Tony Magee. Tony is the founder and owner of Lagunitas Brewing. We first met in the mid-1990s when I visited the old brewery, before they moved to their present location, and have been good friends ever since. Several years ago, now, I wrote a profile of Tony for Beer Connoisseur magazine. With his beautifully twisted, iconoclastic vision, Tony’s built an amazing empire. His unique beers, and especially their quirky label designs and text, are always a treat. I know some people are down on the brewery since their sale to Heineken, but as far as I’m concerned, Tony is still Tony. Join me in wishing Tony a very happy birthday. 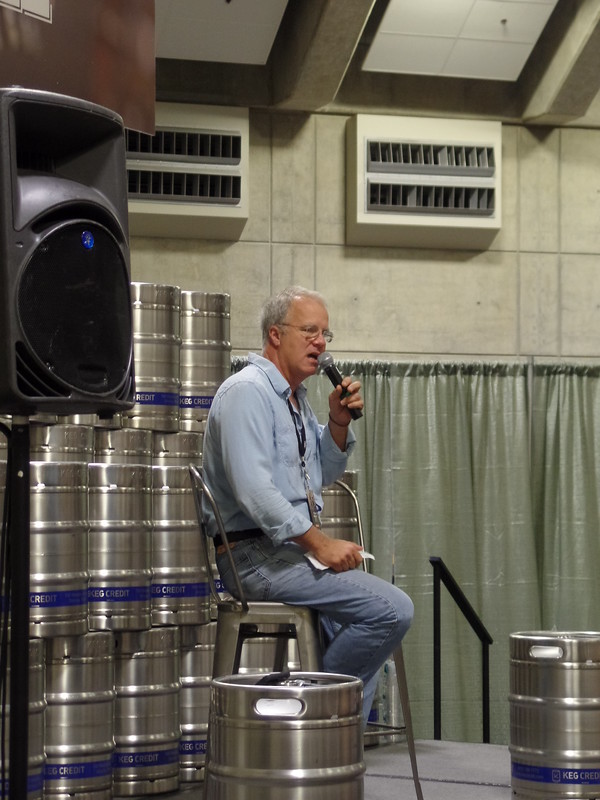