Sunday’s ad is for “Rheingold Beer,” from 1954. This ad was made for the Rheingold Brewery, which was founded by the Liebmann family in 1883 in New York, New York. At its peak, it sold 35% of all the beer in New York state. In 1963, the family sold the brewery and in was shut down in 1976. In 1940, Philip Liebmann, great-grandson of the founder, Samuel Liebmann, started the “Miss Rheingold” pageant as the centerpiece of its marketing campaign. Beer drinkers voted each year on the young lady who would be featured as Miss Rheingold in advertisements. In the 1940s and 1950s in New York, “the selection of Miss Rheingold was as highly anticipated as the race for the White House.” The winning model was then featured in at least twelve monthly advertisements for the brewery, beginning in 1940 and ending in 1965. Beginning in 1941, the selection of next year’s Miss Rheingold was instituted and became wildly popular in the New York Area. This ad announces that “Adrienne Garrett Elected Miss Rheingold 1954.” Garrett was born in California and initially lived in Santa Monica before her family moved to Westchester County, New York, when she was two, where she was raised and graduated from Westchester High School. After graduation, she spent three years as a secretary for a television network — ABC — before embarking on a modeling career, doing primarily commercial product work. Newspaper accounts claim she’s either 22 or 24-years-old, depending on the article, and I’ve been unable to confirm anything more precise. She appeared to be married with a one-year-old son, so Garrett may not be her maiden name, making it harder to find her biographical information. There’s plenty that include her measurements, shoe and dress size, and even hobbies (She loved to sew, swim and ice-skate). Her mother was a California model, and she was apparently being screen-tested when she became pregnant, which derailed her plans to start an acting career. But it seems to have all worked out in the end. In this ad, from April, inviting everyone to “come ride with [her] in a Hansom cab around Central Park, which is a New York tradition, just like — you guessed it — Rheingold beer. 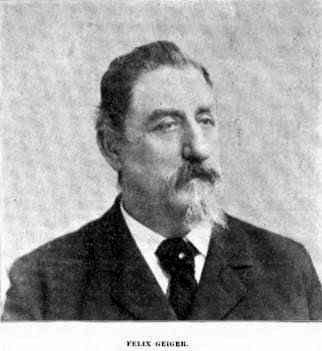 Today is the birthday of Felix Geiger (November 27, 1834-October 6, 1898). He was born in Kappel, Wurttemberg, Germany. After learning to be a brewery in Germany, he emigrated to America in 1854, when he was 20, settling in Philadelphia. After working for several area breweries he became a brewmaster, working at several in Philadelphia, finishing his career with Bergner & Engel.

Here is his obituary from the American Brewer’s Review:

“One of the best known and most popular among the brewmasters and German inhabitants generally of Philadelphia has joined the silent majority. On Oct. 6, Felix Geiger, brewmaster of the Bergner and Engel Brewery for many years departed this life and with him the brewmasters of the city of brotherly love lost one of the most genial companions and active workers in all that interested them.

Felix Geiger was born in 1834 at Kappeln, Wurtemberg. He became a brewers apprentice and worked as a journeyman in German breweries until 1854, when he came to Philadelphia.Here he soon found employment in Carl Fischer’s brewery. Later he worked for Steppaden Brothers, for Conrad Frei and in the so-called “Actien Brewery” until 1857, when he entered the employ of Gustav Bergner as cellar foreman. Seven years later, in 1864, he was employed as a brewmaster in Harry Rothacker’s brewery, later with Engel & Wolf, and a short time with Louis Bergdoll.

In 1871, he was engaged by the firm of Bergner & Engel. In the long term of years he was connected with this brewery he developed great skill and knowledge in his profession, and a rare talent for organization. He was much liked by the employees of the brewery. Mr. Geiger is survived by a widow, three daughters and one son, Joseph, who is president of the George Keller Brewing Company.

The funeral was held Oct. 9, the brewmasters’ association turning out in a body and a large attendance of prominent Germans accompanying the deceased to his last resting place.”

Today is the 51st birthday of Matt Brynildson, brewmaster at Firestone Walker Brewery. I’ve known Matt for a number of years, though I got to know him a lot better when I traveled with him to Burton-on-Trent in England to do a guest brew at Marston’s. And several years ago, we both were in Chile to judge at the Copa Cervezas de America. Also, a few years back, I wrote a profile of Matt for Beer Connoisseur magazine, too. But suffice it to say that apart from being incredibly gifted as a brewer, Matt is also one of the nicest and coolest people in the industry. Join me in wishing Matt a very hoppy birthday.