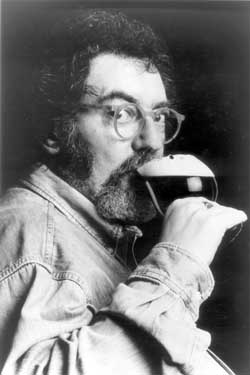 On August 30, 2007 I woke up early, head throbbing, not from too much beer (though I’m sure that was a contributing factor) but from the hop schnapps I had the night before coupled with my sinuses acting up over having spent the previous day in the hopyards of Yakima, Washington, where I’d been attending Hop School as a guest of the good folks from HopUnion. I opened my computer to see what e-mails had come in overnight and saw I’d received one from a colleague only minutes before, just before 6:00 a.m. That e-mail contained the devastating news that passed away earlier that morning in his London home. He got the news from Roger Protz, a beer writer in England, that he had been found in his tub. I later discovered the cause of death was a heart attack. It was is very sad day for the beer world. Michael was larger than life and his influence cannot be overestimated. To say he will be missed seemed (and continues to seem) a grand understatement. I wrote a quick post to get the word out, and dragged myself to the airport, where I was scheduled to fly home that morning. In the time it took me to fly back to northern California, scores of reminisces and memorials had already been created. I began collecting a few of them from around the beer world, while I collected my own thoughts, which are now below. Since blog posts tend to be pushed aside as new ones take their place, I set up this permanent page to remember Michael Jackson, since I want very much to keep alive the memory of my inspiration, my colleague and my friend. I’ll add to this page from time to time as I gather new information, photos and stories.

Interview in Michael’s London home with Dan Shelton of the Shelton Brothers beer importers (on YouTube).

Here are some of my own memories:

I first became aware of Michael Jackson at about the same time I discovered different, more flavorful beers while stationed in New York City in the late 1970s. I was in a U.S. Army Band at the time, stationed under the Verrazano Narrows Bridge on Fort Wadsworth, which is on Staten Island. My bandmates and I went into Manhattan whenever we could and spent a lot of our time in the many jazz clubs in the Village and other parts of the city. Beers like Bass Ale, Guinness and Pilsner Urquell were often served in these clubs and they were vastly different from the local pilsners I grew up drinking in southeastern Pennsylvania. I was smitten with them at once, and wanting to learn more about them, chanced upon Michael’s World Guide to Beer at a bookstore and devoured it whole.

Fast forward around 13 years later and I’d just published The Bars of Santa Clara: A Beer Drinker’s Guide to Silicon Valley and treated myself to my first trip to the Great American Beer Festival. This was 1991 or 92. Michael was signing books at a table and I was thrilled to finally meet someone who had been such an inspiration. I told him about my book and explained how grateful I was for his books and how helpful they were to me in writing a summary of beer history and styles for my guidebook’s appendices. He gave me his card and asked me to send him a copy, which I happily did.

My next encounter with Michael was at the Great Divide Brewery in Denver during a later GABF. At this point I was the beer buyer at Beverages & more and had been invited to one of the first of Great Divide’s annual Thursday morning open houses because I had recently started selling Great Divide in our California stores. I asked Michael if he had received my book, fully expecting him to have no recollection of it given that several years had passed. He told me he remembered it and particularly liked my appendix with historical events, birthdays etc. for every day of the year, a lifelong passion of mine that you can still see in the upper left-hand corner of the Bulletin every day. 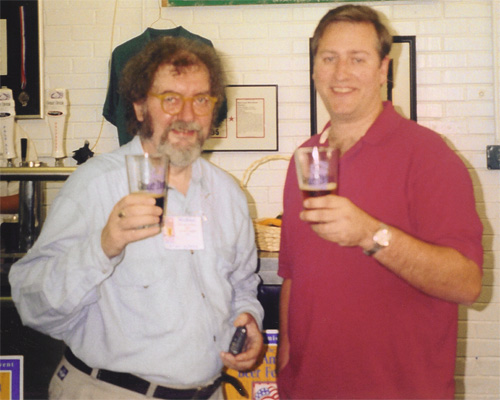 A few years later I joined the Celebrator Beer News and saw Michael more and more at events around the country. I loved hearing him talk about beer, of course, but I figured out early on that it wasn’t the only thing he loved. As a result we started discussing literature, politics, music — especially jazz — and topics decidedly non-beery whenever we saw one another. He recommended many books and authors to me over the years, including ones I now cherish such A.J. Liebling. I think Michael liked being able to relax and not have to talk about beer constantly and I just enjoyed his company, he was insightful and a great storyteller.

But I think my favorite Michael memory took place at the Craft Brewers Conference when it was in San Diego in 2004. One night everyone was around the central pool area enjoying the many San Diego beers there. I was feeling hungry and thinking about getting dinner even though it was later in the evening. About that same time, Michael declared he was hungry and it turned out we were the only peckish ones in our group standing around chatting. I volunteered to take Michael to dinner so his people could stay at the party. We walked slowly over to the closest restaurant in Town & Country, the self-contained resort where CBC was being held, talking amiably about nothing and everything. But we arrived too late and a rude maitre’d would not seat us and suggested we try the last remaining open restaurant in the complex, though he wouldn’t guarantee it was open either. Outside the restaurant, I persuaded a Town & Country employee to take us to the other restaurant, Kelly’s Steakhouse, in his electric golf-cart because Michael was visibly tired. Kelly’s Steakhouse was open and we sat at a corner table, before spying Vinnie and Natalie Cilurzo out to dinner with some friends. They had just sat down, too, and invited us to join them and we all re-situated ourselves at a larger table. It was a great night of wine, beer and conversation. And there are a few funny stories I can’t tell here.

The outpouring of memories and reminiscences in the last 24-hours are a living testament to the influence Michael had throughout his thirty-plus-years writing about beer and spirits. It’s hard to imagine a single soul who did more for an industry. It’s a remarkable achievement that reminds me of one of my favorite stories, Jean Giono’s The Man Who Planted Trees. It’s a French tale about a solitary man living alone in the hills of a desolate part of rural France as a sheepherder. Every night he hand picks fifty acorns and the following day he plants them. He does this for years and then decades, totally changing the landscape. The trees flourish which brings back birds, animals, plants and water, which in turn brings life back to an entire region, including countless people who begin moving back into the area. It was made into a wonderful animated film several years ago which won an Academy Award for short animated feature (you can watch the video on Google Video). The story is about how the dedication and perseverance of one man — which could be you or me — can really make a difference. So often we feel like nothing we do can or will make much of a difference, but people like Elzéard Bouffier (the fictional tree man) and Michael Jackson prove that it is possible for an exceptional person to have a profound effect on peoples’ lives. It’s almost impossible to imagine what the American craft beer industry would be like today without Michael Jackson. He wrote with such passion and enthusiasm — and so beautifully — that he inspired countless brewers and beer enthusiasts. Without his voice, where would be today? He was a giant among men. Try as we might, none of us writing today are in his league. A few are very good — you know who you are — but there is no one as clearly gifted. Of course, through his work Michael will live on and continue to inspire us, as well as future generations of beer lovers. 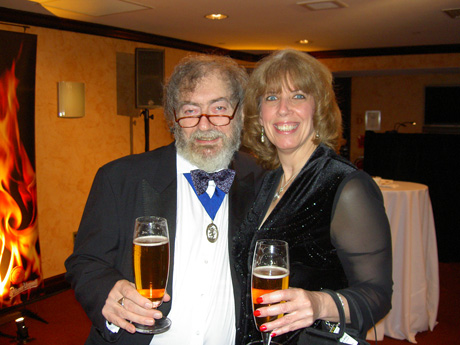 Michael and Carolyn Smagalski at a recent Pilsner Urquell event. (Thanks for the photo Carolyn.)

Here’s a story from my friend Brian Hunt, who owns Moonlight Brewing:

In the late ’80’s MJ was planning to visit my brewery in Napa, CA. I had remembered that at the register of my regular dive-y gas station there was a cardboard tilt-up display of gaudy lapel pins. I guess the American flags and other popular ones were gone, but of there were 8 or so stragglers that no one would want and had been there for months. There was one that said “Michael Jackson” in pink script. The poor thing was destined to be there for decades unless I acted. So I laid down my 99 cents and presented it to MJ that afternoon. From the look on his face, I doubted anyone had given him quite the same gift before. After a moment of pondering, he politely thanked me and we got down to serious business of tasting. I never saw him wear it, but I hope at some stuffy convention he wore it instead of the usual mundane pin-on style name tag. Besides, who else would wear a pink Michael Jackson lapel pin?