The list below is an on-going project attempting to list the oldest bars still operating in the United States. This was originally a post that I did in August of 2008, prompted by another website’s list that contained many inaccuracies and omissions. My list is far more comprehensive, and is based on reader comments to the original post plus some of my own research and poking around. Even so, I’m sure I’m missing a lot, because there’s no central repository for this sort of information. As one commenter made clear, I need to point out that these are bars that are still open, and still bars, not old pieces of dirt with scattered bricks and other evidence that a bar once stood there. If you know of any others that should be on this list, please do let me know by sending me an e-mail. 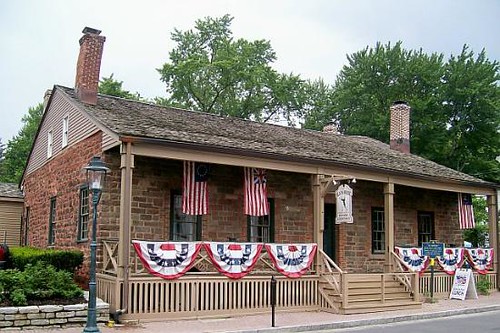 The following are also contenders, but for one reason or another it isn’t clear if they were originally bars. They’re old, but they weren’t necessarily bars from their beginning or at a remote enough date in the past to make the list above.

Another list claims that The Pirate’s House in Savannah, Georgia is the oldest, despite there being over a dozen with earlier dates. And more troubling, the front page of their website says “[s]ince 1753, The Pirate’s House has been welcoming visitors to Savannah with a bounty of delicious food and drink and rousing good times,” but under their page on history, it becomes clear that it wasn’t always a bar or even a restaurant, negating their claim of “welcoming visitors” with drinks since 1753. The “American Museum Society … lists this historic tavern as a house museum. The property was acquired by the Savannah Gas Company in 1948 and the buildings soon fell under the magic of Mrs. Hansell Hillyer, wife of the president of the company, who with great imagination, and skill transformed the fascinating museum into its present use as a restaurant.” After detailing the earlier history of the area, they remark that “[t]hese very same buildings have recently been converted into one of America’s most unique restaurants.”

The Napoleon House, which claims its origin as 1797, appears on numerous lists of the oldest taverns. But on its own history page, it reveals that the “building’s first occupant, Nicholas Girod, was mayor of New Orleans from 1812 to 1815. He offered his residence to Napoleon in 1821 as a refuge during his exile.” That means it wasn’t a bar at all, but someone’s home. The history also includes that it has been “[o]wned and operated by the Impastato family since 1914” and that “the Napoleon House has become one of the most famous bars in America, a haunt for artists and writers throughout most of the 20th century.” That’s 20th century, not the 18th century.

Also, the Green Dragon in Boston, MA opened in 1654 so presumably might be considered the oldest. In 1764, the St. Andrews Lodge of Freemasons bought the tavern. Unfortunately, the original location on Union Street was demolished in 1854. Its present location at 11 Marshall Street was built at a later date, but I can’t find out exactly when. It’s certainly old, but probably not more than 100 years, if that.

Not As Old As They Appear

There appear to be quite a few others that are old-looking bars or taverns that have been built recently to resemble what they looked like when they originally existed. In many cases, they use the date of the original as their founding date, despite not being the same building or even located at the same spot. It didn’t seem fair to include those in the main list, but because they’re still interesting places, as I find more of them, I’ll add them to this separate list:

Several websites seem to list the Iron Door Saloon, of Groveland, as the oldest bar in California, though none of them has any compelling evidence or explanation. Trip Advisor’s listing for the bar includes photos showing a sign outside the entrance giving the date as 1852 and making the claim that it’s the oldest bar, but the website for the Iron Door states that while the building may have been built in 1851 (though it never explicitly says so), it didn’t become a saloon until 1896. The Sierra Nevada Geotourism MapGuide seems to have the first part of their story.

The Historic Iron Door Saloon is the oldest continuously operating saloon in California. Located near Yosemite National Park, it was built in the California Gold Country sometime before 1852. It was first called the “Granite Store”, perhaps because the front and back walls are made of solid granite blocks. The sidewalls are made of “shist” rock and mortar and the roof consists of three feet of sod, covered by tin.

But both the SNGM and the Iron Door reveal the 1896 date as when it became a saloon, so I’m at a loss to understand why there are claims that it’s been a saloon since 1852.

James Tannahill was the first owner of the store that would become the Iron Door Saloon and served the Groveland community as the first Postmaster from 1863 to 1880, running the post office in the store.

The establishment became a saloon in 1896 when it was purchased by Giacomo DeFarrari and was named “Jake’s Place.” 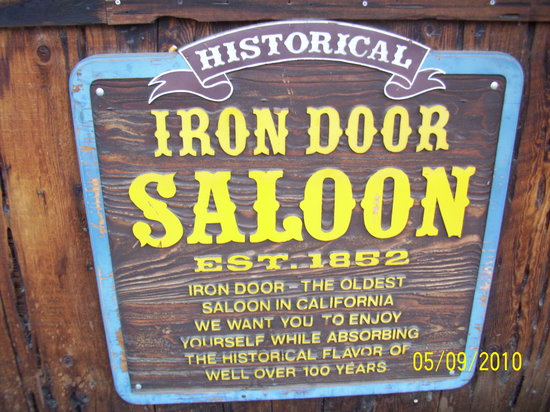 The Flagon and Trencher

The Flagon and Trencher

An alert reader sent me some information about The Flagon and Trencher, an organization for “Descendants of Colonial Tavern Keepers.”