On Thursday, the 20th annual Oregon Brewers Festival began with a brunch at the Rogue Public House on NW Flanders in Portland. Afterwards, Portland’s mayor, Tom Potter, led a parade through the streets of town to the festival grounds at Tom McCall Waterfront Park along the Willamette River. 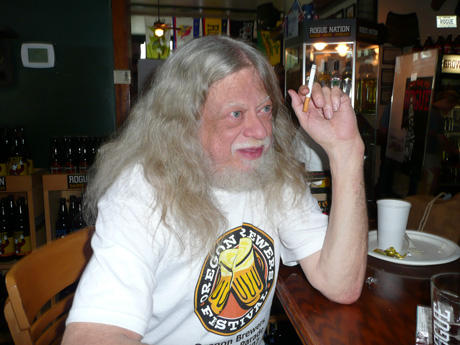 I had my breakfast with Don Younger, Publican extraordinaire of the Horse Brass. 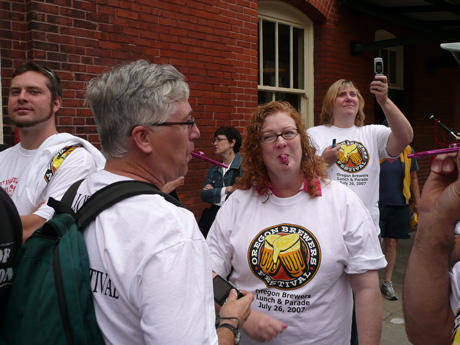 Afterwards, everyone gathered outside for the parade. Here Noel Blake and Lisa Morrison practice their kazoos. 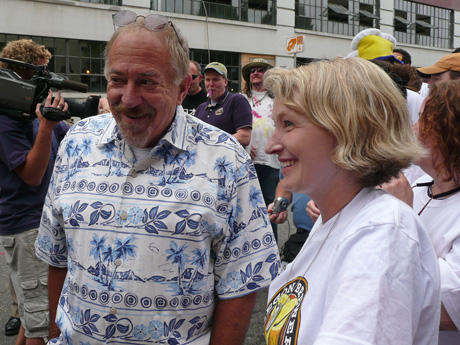 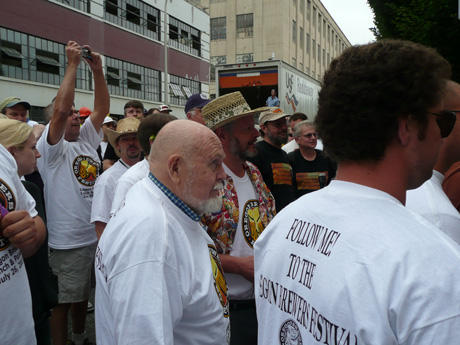 Portland beer luminary Fred Eckhardt watches with the crowd as the festivities began around eleven. 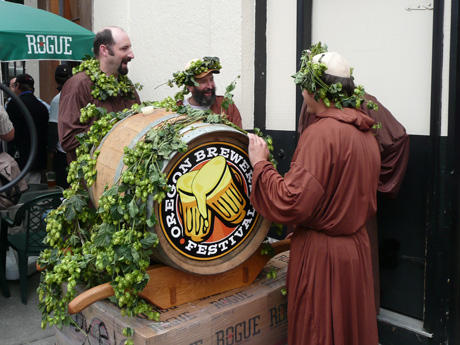 The Rogue monks, including head brewer John Maier (in center), prepare to carry the festival keg through the parade. 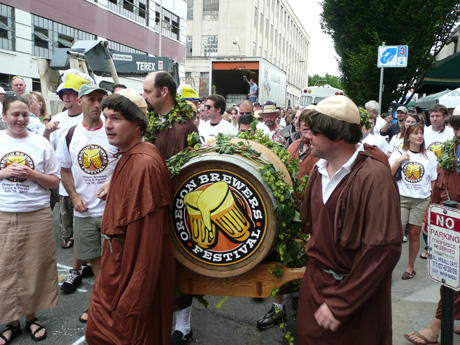 They carried it on a yolk, the old fashioned way into the street to begin the parade. 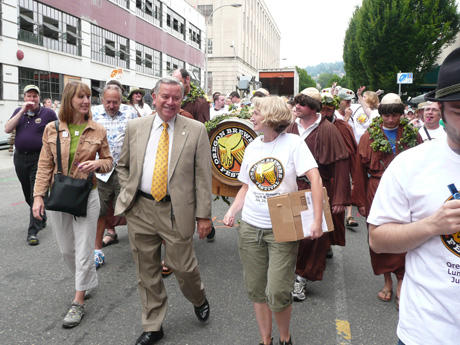 Mayor Tom Potter with Chris Crabb as the parade begins. 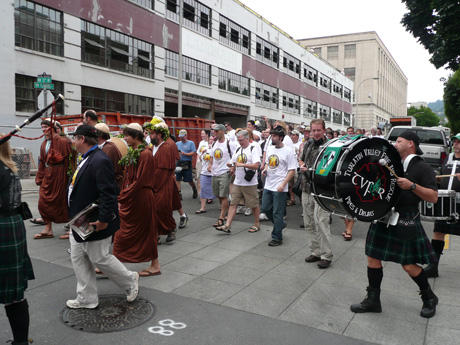 Everybody spilled into the street behind the mayor and the ceremonial keg. 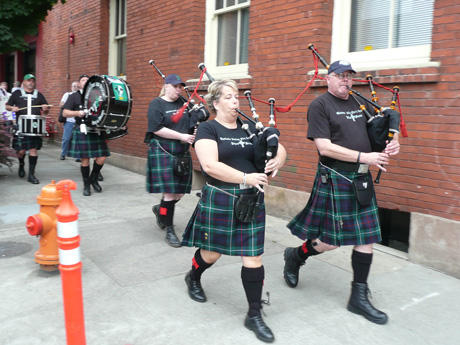 Including the bagpipe and drum band from a local fire company. 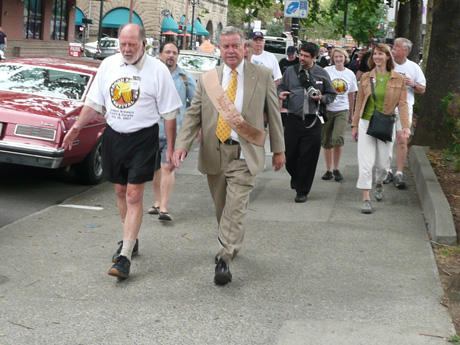 Art Larrance, director of the festival, with Mayor Potter leading the throngs down the streets of Portland. 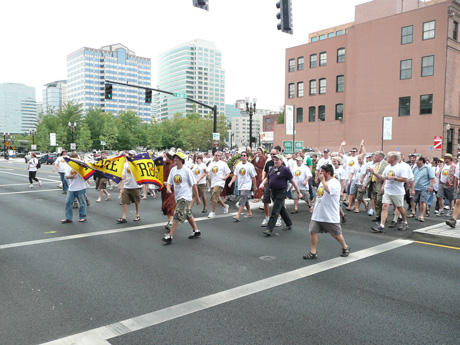 Until everyone massed across the street from the festival grounds and crossed the street to enter. 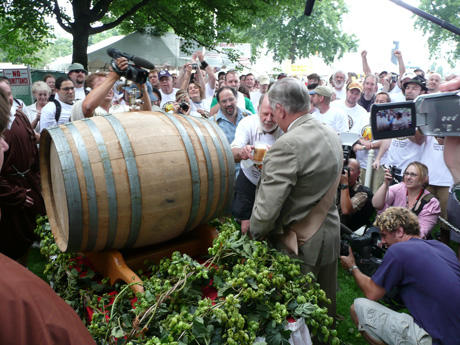 The mayor tapped the ceremonial keg and shared the first pint with Art Larrance. 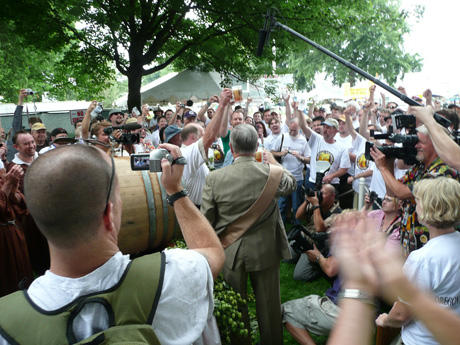 Then the pair raised a toast to the opening of the festival. 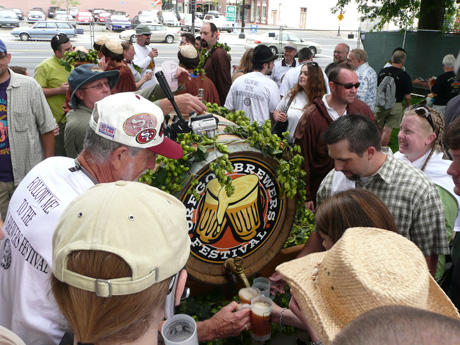 Then glasses were handed out so the rest of us could enjoy the festival beer. 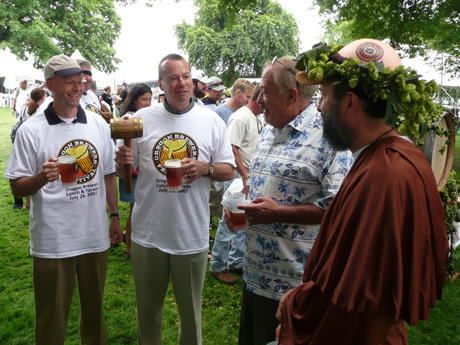 Rob and Kurt Widmer accept the gavel for next year’s festival from Jack Joyce and John Maier from Rogue. Next year Widmer Brothers Brewing will be brewing the festival beer and will be hosting festivities next year. 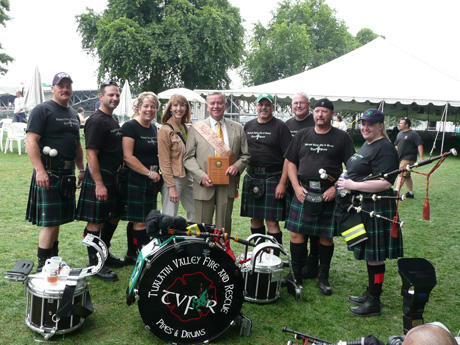 The mayor poses with the pipe & drum band. 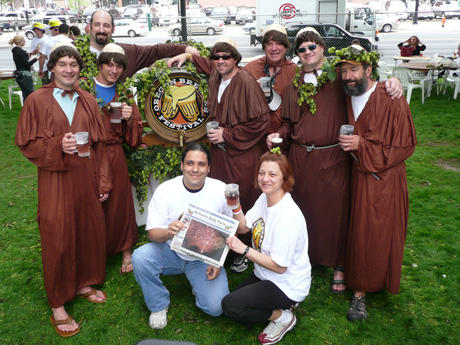 Some out-of-towners pose with their local paper and the Rogue monks. 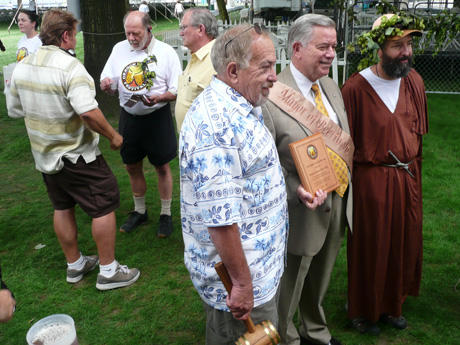