Saturday was the 15th annual Toronado Barleywine Festival in San Francisco, California. It’s hard to believe this festival has been going on so long, but it’s quickly established itself as one of the premiere showcases for Barley Wines anywhere in the world. If you love this style of beer — as I do — this is one of the must-attend events on the beer calendar. Dave Keene has really created a very special event that seems to inexplicably get better year after year. 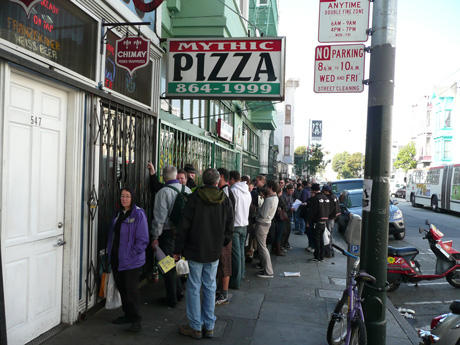 When I arrived for judging, around 10:30 in the morning — half an hour before the doors opened — and there was already a sizable line of people waiting to get in. The couple at the head of the line apparently arrived at 7:30!

By the time the festival began, the line stretched almost to the end of the block. That’s the longest line for this festival I’ve ever seen. 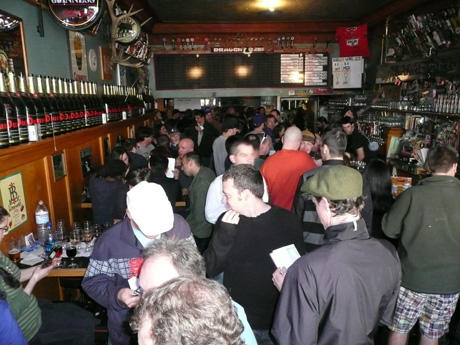 Once open, the Toronado filled up quickly we people staking their claim.

It was funny to see the usually full list of taps nearly empty. 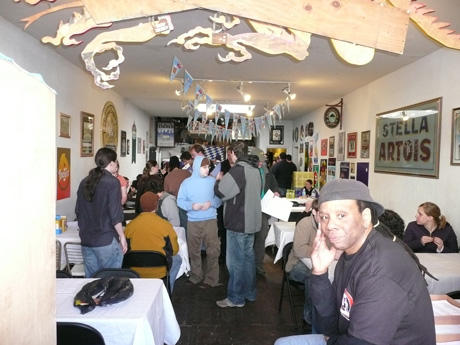 Even the overflow into the side room of larger tables began filling in. 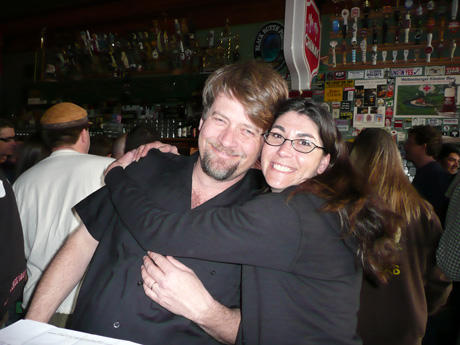 Chris Black, owner of the Falling Rock in Denver, with Jen Garris, with New Belgium Brewing, managed to snag the second table in the Toronado. 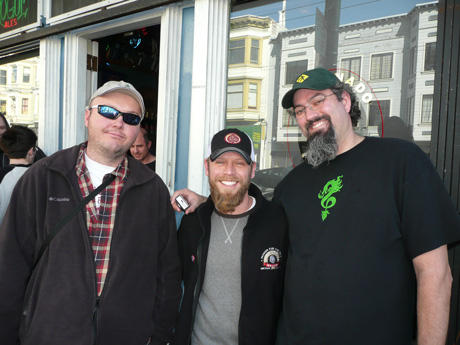 While outside Matt Brynildson (center) and one of his assistant brewers along with Sean Paxton, the homebrew chef (on the right sporting the logo of Portland’s newest brewery, the Green Dragon) enjoyed the rare San Francisco winter sun. 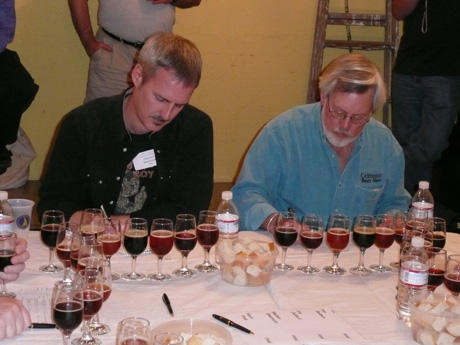 Meanwhile, the final judging raged on. Stephen Beaumont and Tom Dalldorf writing down their initial impressions before the all-out battle begins to declare a champion. 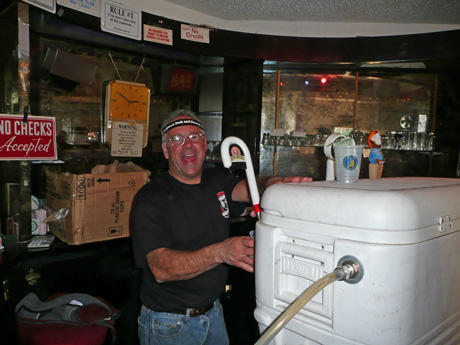 Judging takes place across the street from the Toronado at the Peacock Lounge. Joe mans the bar and provides libations for the judges after their finished with their rounds. 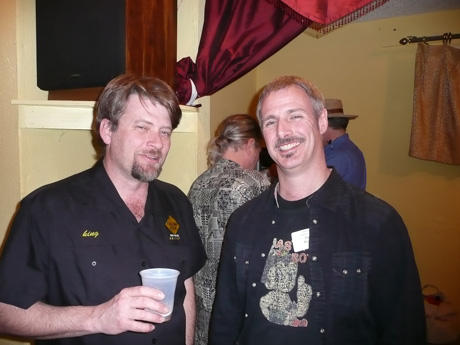 At the Peacock Lounge after the winners were announced, Chris Black and Stephen Beaumont. 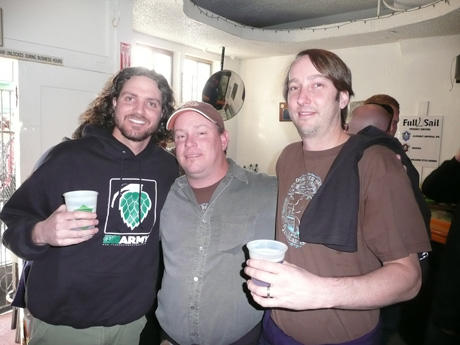 Justin Crossley, from the Brewing Network, Arne Johnson from Marin Brewing and Ben from Magnolia Brewing. 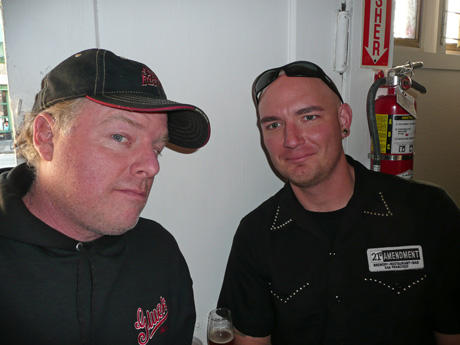 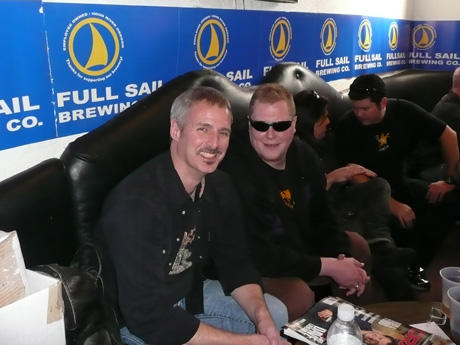 Stephen Beaumont and Matt Bonney, co-owner of Brouwer’s and Bottleworks, both in Seattle, Washington. 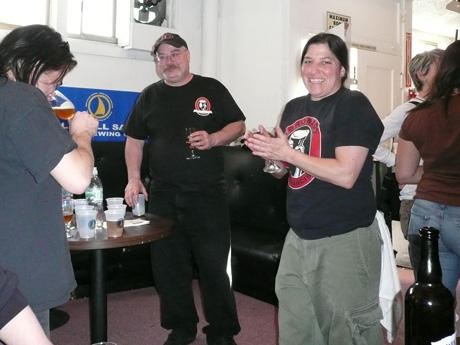 Betsy, warming her glass of Deviation, a limited edition Russian River beer made especially for Brouwer’s Cafe. Apparently, there are — or rather were — only three bottles of this out in the world. Matt Bonney opened one for a few of us to share. 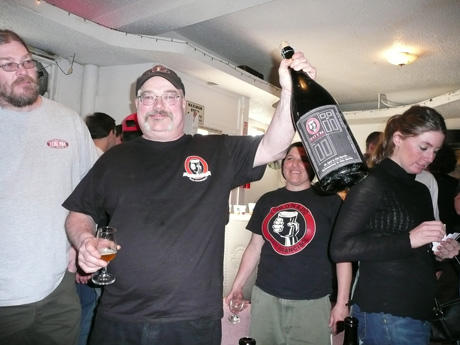 Then Dave Keene opened a big bottle of his 20th Anniversary Ale that Russian River brewed for him. 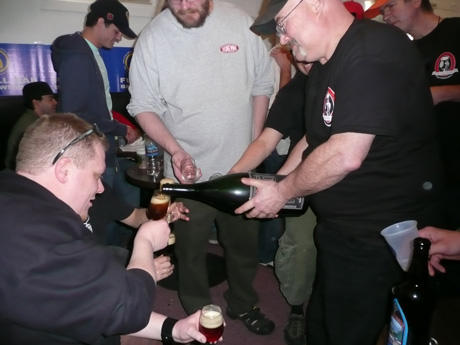 And poured a glass for Matt Bonney. 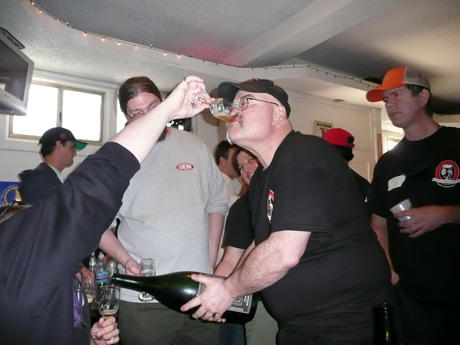 While at the same time he gave Dave a sip of Lost Abbey Cable Car that Beaumont had opened earlier. 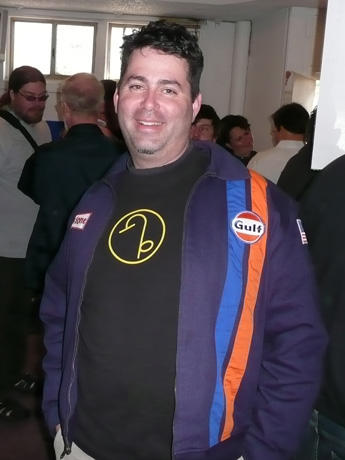 Rich Norgrove, from Bear Republic Brewing, demonstrating how easy it is to get your picture in the Brookston Beer Bulletin. 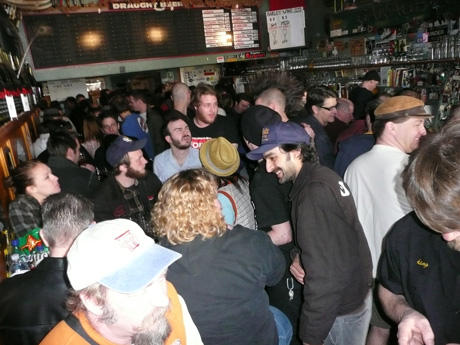 By early afternoon, the Toronado was wall-to-wall people hoping to sample some wonderful Barley Wine. 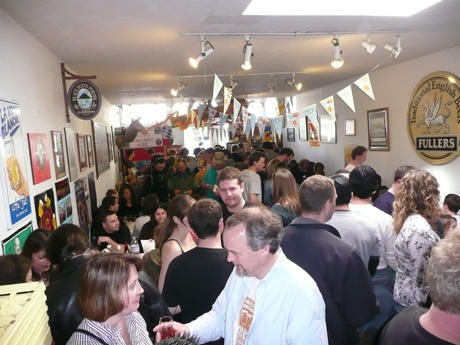 And even the side room had filled to capacity. With a total of 55 Barley Wines, plus a few other wonders on tap — like the Lost Abbey’s Angel’s Share — it was wonderful day for beer in San Francisco, and the stellar weather made the experience all the more enjoyable.