On January 11th, 21st Amendment Brewery broke out the good stuff for a very special beer dinner. It was a five-course dinner, plus amuse bouche (which are essentially smaller sized hors d’œuvre, the name comes from nouvelle cuisine). For beer, owners Shaun O’Sullivan and Nico Freccia dipped deep into their beer cellar, pulling out their own beers from years past, beers picked up during their travels as well as beer given to them by visiting brewers. Only twenty guests were permitted to purchase tickets to the dinner, primarily because many of the beers were in small supply. The brewer’s loft, situated on the mezzanine level in the back overlooking the general seating area below, was the setting for the event. One large rectangular table with a white tablecloth with 24 place settings was the only table in the room. As a result, the dinner had the feel of a large cocktail party in a friend’s home. Throughout the evening, bottles of beer from the library were selected on the spot to pair which each course with no fewer than a half-dozen different beers that could be sampled with each new dish. The price per person was $120, which given the quality of the food and the sheer variety, diversity and uniqueness of the beers was a bargain. When you consider that one of the beers of the evening was Wesvleteren 8, it was a steal. The food was terrific, the company engaging and lively, and the beer heavenly. While Shaun talked about the brewery, we enjoyed several different hand passed amuse bouche, including these crab cakes. The beer “library,” in the brewery coldbox, contains crates … And boxes of collected beers to be paired with our dinner. Shaun showing off the second beer of the evening, Wesvleteren 8. Wesvleteren doesn’t use labels, the crown indicates which of their three beers it is. 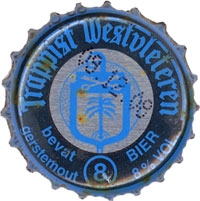 I hadn’t had the Westvleteren 8 in several years, and I was excited to see if was as good as I remembered. It was a beautiful ruby red and ruddy brown. The nose, though subtle, was complex and included aromas of fruity esters and sweet molasses. It was as wonderful as I recalled, with complex flavors of sweet malt with a touch of honey and molasses and an undercurrent of apricots. Fantastic conditioning and so, so smooth. Every sip was a delight. I saved a little for our first course, and it paired beautifully with the earthy morel mushrooms in our first dish. Back upstairs, the dinner guests waiting for our first course. With everyone chatting and getting to know their table neighbors. The first dish: Sea of Cortez Scallops with Morel Mushrooms and Sauce Americain. A few early beers pulled out the cellar: a Trumer Pils from when the brewery first opened in Berkeley, a different Jolly Roger Christmas Ale (this one from Maritime Pacific Brewing in Seattle, an old Miller 1855 (which had been released in November 2005 to commemorate their 150th anniversary of Miller Brewing; naturally it had gone bad), and a Japanese mystery beer with a beautiful label. The website for the Land Brauerei Echigo-Brau is in Japanese only, so I don’t know much about the Koshihikari Echigo Beer, apart from it was probably a rice beer of some kind. Other beers included several from Jolly Pumpkin in Dexter, Michigan. And this beer commemorating the 30th Twinning Anniversary between Bamberg and Bedford, whatever that means. Back upstairs again, the beer continued to flow from the “library.” A few more single bottles we opened, from Cantillon and other Belgian breweries plus a Firestone Walker Reserve from two years ago. Other beers opened over the course of the evening included aged Racer 5 and Red Rocket from Bear Republic, Carolus Noel, Val-Dieu, an IPA from Weyermann’s pilot brewery in Bamberg, Germany, Archived 21st IPAs and Double IPAs, and the last six cans of Watermelon Funk — the collaboration between 21st Amendment and Russian River. This was prehaps the fourth or fifth time I’ve been lucky enough to get a taste of the Watermelon Funk, and it’s been fun watching it change over time. This time around the Brett funk, while still unquestionably there, has become somewhat restrained while the juiciness of the watermelon has begun to reassert itself. We were then serenaded briefly by 21-A GM Lorenzo Knight, who covered a White Stripes tune. La Gourmande Biere d’Epeautre de Hotton from Brasserie Fantome, a saison, and Grobbendonks Tientje 2005, from Brouwerij Kerkom (and which I understand was only made one time).

Shaun maniacally holds a bottle of 2000 Cantillon Gueuze that he hand-carried home from Brussels, after a trip he and I took to Cantillon last year. Throughout the dinner, Shaun, Nico and Jesse circled the table making sure everyone had something new in their glass. Which was paired with several fruit beers and lambics. After the dinner, Shaun broke out a bottle of Verte Absinthe — now legal again in the U.S. — from St. George Spirits in nearby Alameda. Then everybody donned their coats and adjourned to the outdoor beer garden to enjoy a cigar to end the meal and finish off the remaining beer. From left: John Foster, from Beer School, 21-A co-owner/brewmaster Shaun O’Sullivan, 21-A head brewer Jesse Houck, 21-A GM Lloyd Knight and 21-A co-owner Nico Freccia.