I got the following press release from Iron Springs Brewpub in Fairfax, with more good news. In addition to securing a new five-year lease, they’ve nabbed a great new head brewer: Christian Kazakoff. He’s been the head brewer at Triple Rock for the past ten years.

Iron Springs Pub & Brewery is proud to announce, taking over the helm as the new head brewer, Christian Kazakoff. Christian comes to Iron Springs with a lengthy background in brewing in the Bay Area. Christian spent the last 10 years running Triple Rock Brewery in Berkeley and has worked with some of the finest brewers around San Francisco. We are excited to have Christian as the newest member of the Iron Springs family and we feel he is going to take the brewery into this new era for Iron Springs. Iron Springs plans to offer brewer’s dinners four times a year to highlight Christian’s ales from the brewery and the pub’s famous food.

Rumors have already started about who will be replacing him at Triple Rock. I’ve already heard at least three names floated, but let’s see how things develop first before passing those along. 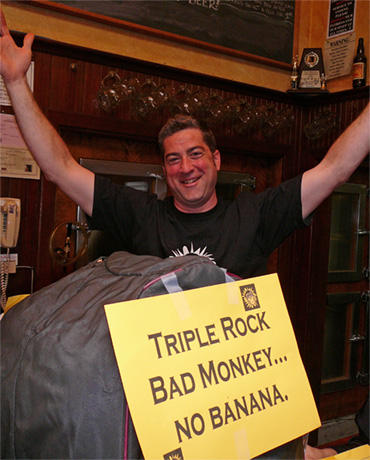 Christian after a sleepless night setting up before last year’s Bay Area Firkin Fest at Triple Rock. I’m not sure what this news means for the fate of the Firkin Fest.