Okay, they’re not exactly going out on a limb recommending whites as a refreshing summer beverage but it’s still nice to see the San Francisco Chronicle mention them. The usual suggestions generally range from white wine to zinfandel so even talking about beer is a good step. Their choices, while mainstream wits, were still good choices and included Hoegaarden, Unibroue Blanche de Chambly — though their new Chambly Noire is fantastic — and Ommegang Witte.

One strange disconnect is that even though these beers are all wonderful — though Hoegaarden used to be better — they are all Belgian or Belgian-style beers and the focus of the Chronicle’s piece was about the 4th of July holiday. Given that it’s also American Beer Month it would have been more appropriate to choose more American beers (even though the BA abandoned it). I don’t mean to sound jingoistic here, but that only makes sense, doesn’t it? It’s not like there aren’t plenty of American beers that could have been celebrated, too. Chronicle wine writer Linda Murphy is one of the mainstrean writers who is at least trying to highlight beer more — she is one of the good guys — so I want to encourage her rather than complain too much. And perhaps most importantly, she actually likes craft beer, itself a rarity among wine writers.

Murphy finishes with a little mini-story about Pierre Celis and his role in the resurrection of the style. Unfortunately the end of the story was Pierre’s return to Belgium which it appears now is happily not the final chapter. Celis is returning to Texas to start another brewery here in the states, which is great news for those of us who find the man charming and his beers a delight. 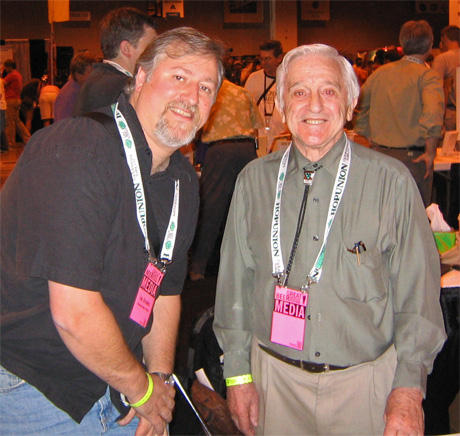 Me at last year’s GABF with brewing legend Pierre Celis, who single-handedly revived the style Hefeweizen in the 1960s.