Cervejaria Colorado was one of Brazil’s first small breweries when it opened in 1995. I met founder Marcello Carneiro in Argentina when I was there for beer judging in 2011. He’s one of the most fun-loving people I’ve ever met and I’ve since seen him in Brazil and also stateside a few times. He announced earlier today on Facebook that AmBev would be acquiring his brewery. Here’s the Google translation of the announcement:

Dear friends of the bear, we are very happy to formalize you that now the Colorado it becomes part of the group Ambev, along the breweries beer! In 1995, our founder, Marcelo Carneiro, started his journey in the country and put the breweries Colorado on the international market, solidifying a company that today bill around $18 million per year. 20 years ago we work with dignity and fight for the cause brewery, we gain strength and tread a path of large awards, authenticity and it will now be even better! We will continue to develop Brazilian genuinely revenue, our DNA. The Union of the brands will make it possible to increase the capacity of distribution of Colorado and, of course, to our dear Marcelo to devote even more to research of ingredients. Our commitment to the lovers of good beer is still strong and the dream that unites the two pubs is the recovery of the Brazilian beer, with ingredients Brazilians and produced for consumers from north to south of the country. Unite is to make this dream a reality, the dream of the Brazilian school of beer! A toast and hug from bear.

AmBev, you may recall, is the Companhia de Bebidas das Américas, a Brazilian brewing company, and the largest in Latin America and 5th worldwide. It was established by a merger of Brahma and Antarctica in 1999. After more business dealings, mergers and acquisitions, today is owned by Anheuser-Busch InBev. AmBev makes Antarctica, Brahma, Bohemia, and Skol, and in addition has a controlling interest in the popular Argentine brand Quilmes.

AmBev also released a statement, which I’ve used Google Translate to make more understandable as my Portuguese is worthless:

COLORADO NOW IS THE TIME OF THE BREWERY BOHEMIA

Breweries unite the passion for beer and the search for innovation

The dream of creating a Brazilian school of beer, based on the valuation of culture and national ingredients, joined our Brewery Bohemia Brewery and Colorado. The mark of São Paulo is now part of our team, bringing their tradition, quality, passion and daring.

“I am very excited about the opportunity to achieve my dream with Cervejaria Bohemia. When I founded the Colorado 20 years ago, always wanted to give a national touch to recipes and create a Brazilian school of beer, as there is the German and Belgian. I know that together we will make it happen, “says Marcelo Cerneiro, founder of Colorado.

Wakswaser Daniel, director of marketing for Cervejaria Bohemia, also celebrates the partnership: “It’s a time of celebration for the Brazilian culture. Our union allows further spread the knowledge brewing across the country. Consumers will have more choices, varied beers, unusual income and undisputed quality. ”

The Colorado follows with manufacturing in Ribeirão Preto, São Paulo. All labels will be maintained and the union with Bohemia Brewery will bring innovation to the portfolio. With the alliance, the distribution of power increases, enabling the brand to bring more beer enthusiasts throughout Brazil.

So it appears that the acquisition will merge Colorado with AmBev’s premium division headed by Cervejaria Bohemia, just as Wäls did in February, when AmBev bought them, as well. Also, in May, they acquired the Bogotá Beer Co., which is/was Colombia’s largest craft brewer.” So it appears there’s some long term plan for Latin America, just as we’re seeing here in the United States, too.

Marcelo’s also announced what his role will be going forward. “My job is international consultant, for a minimum of five years. My task will be to open new roads for Colorado, talk to business partners, represent the brand that I fought for 20 years. My fight has always been and will continue to facilitate the consolidation of a typically Brazilian brewing school, and it will never be abandoned.” 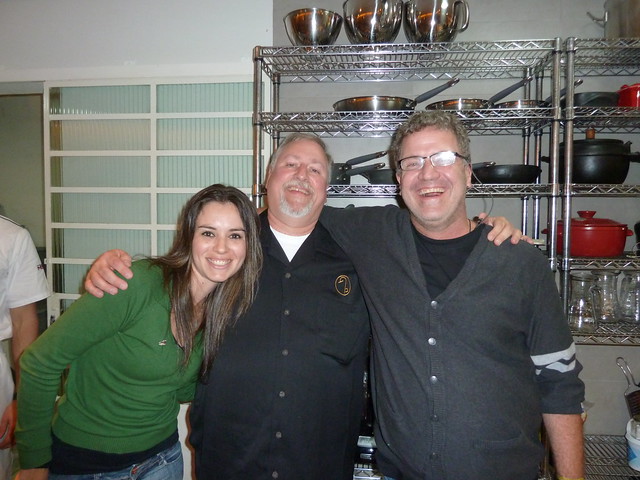 Bia Amorim, me and Marcello after a beer dinner in São Paulo in 2011.