Today is also the 51st birthday of Luke Nicholas, founder/brewer of Epic Brewing in New Zealand. Luke brewed for many years in New Zealand before striking out on his own, and also lived in the States for a spell working for RealBeer.com and became fond of hoppy beers. As a result, his beers are some of the hoppiest in New Zealand. He also started a real beer website just for New Zealand, RealBeer.co.nz and was instrumental in starting a Brewers Guild of NZ. Luke was kind enough to show me around the beer scene in Auckland when I was there with my family a few years ago, and we run into one another at beer events surprisingly often. He’s a great beer ambassador not just for his native country, but for great beer everywhere. You can also read about his exploits online at Luke’s Beer. Join me in wishing Luke a very happy birthday. Me and Luke outside 21st Amendment during a visit to our shores. And at the 2010 Craft Brewers Conference in Chicago. With Stephen Beaumont at CBC in Washington, DC a few years back. 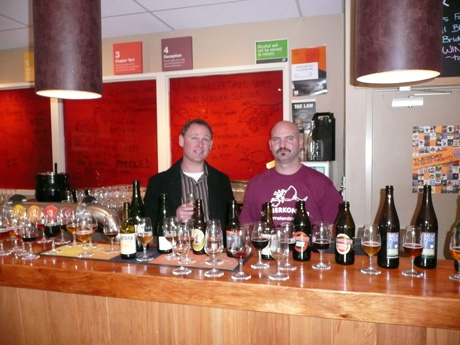