Today is the birthday of Frank J. Hahne, Jr. (May 12, 1883-February 1980). He was the son of Frank J. Hahne, who founded the DuBois Brewing Co. either in 1896 or 1897, sources seem mixed. The brewery survived prohibition, with Frank Jr. taking over in 1932, and the brewery stayed in business until 1973, although the business was sold to Pittsburgh Brewing in 1967. Given that Frank Hahne Jr. lived until 1980, it’s surprising that I could not find any photos of him online, or indeed anything about his exploits running the family brewery. 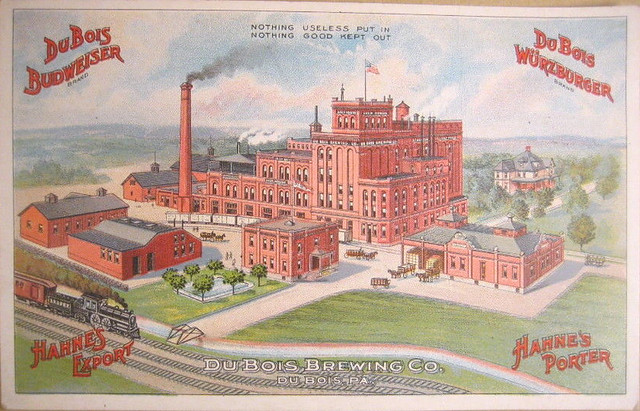 As I mentioned, there was some confusion about the brewery’s founding date, which is addressed on the Wikipedia page for the town of DuBois, Pennsylvania:

There seems to be some debate as to exactly when Frank Hahne came to DuBois and broke ground on his own facility. One source claims 1898, another 1897. It seems most likely that this occurred between April and the end of 1896. It was on April 16, 1896, that the DuBois Weekly Courier reported: “Some new developments in connection with the brewery may be looked for in the near future.”

There were a number of reasons Hahne chose the DuBois site for his facility, but the most frequently cited was the excellence of the water supply. He purchased 2,300 acres (9.3 km2) surrounding the local reservoir to protect the watershed from pollution.

By 1906, the brewery had four products on the market: DuBois Wurzburger, Hahne’s Export Pilsener, DuBois Porter, and DuBois Budweiser. The Budweiser name would be at the center of controversy for 60 years between DuBois Brewing and Anheuser-Busch. 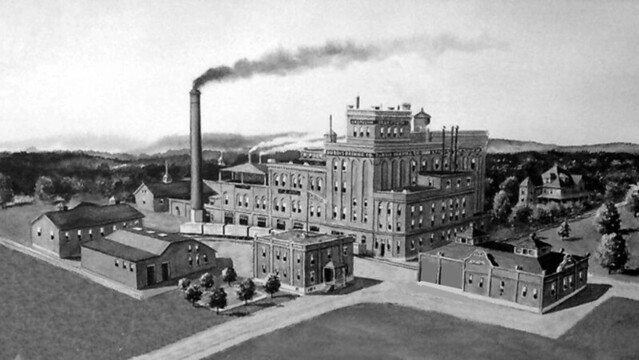 The DuBois brands soon traveled far and wide for a brewery of its size, ranging up to 150 miles (240 km) away and selling well in Buffalo, Erie and Pittsburgh. The brewery’s 300-barrel kettle was kept busy churning out brands, while the left-over grain materials were pressed and sold for cattle feed and grist mills in the rural areas surrounding DuBois.

As with many other American breweries, DuBois Brewing moved right along until 1918 and the advent of Prohibition. The brewery shifted production to “near beer” and soft drinks and opened the H&G Ice Company. According to the April 7, 1933, DuBois Courier, the brewery won the honor of being one of only two breweries in the entire nation that had never violated or been suspected of violating the Prohibition laws since the 18th Amendment went into effect. As a result, DuBois Brewing Company was issued license number G-2, allowing them to resume brewing immediately upon the enaction of the 21st Amendment.

Frank Hahne died in 1932, and the brewery was passed to his only son, Frank Hahne Jr., whose own only son died in infancy, leaving the family without an heir. Hahne Jr. sold the brewery to Pittsburgh Brewing in 1967. 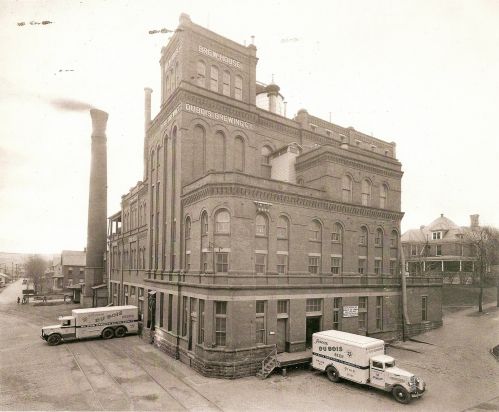 This account, from the DuBois Area Historical Society, picks up after his father’s death in 1932:

With the death of his father, management of DuBois Brewery passed to Frank Hahne Jr. with his sister, Marie, as vice president.

The DuBois Brewery had many successes and some setbacks defending its right to use the Budwiser name for over 60 years that it brewed a Budweiser beer. Starting in 1905 when the brewery began the use of the name for one of its many beer brands, Hahne Sr. and later Frank Jr. maintained that their major label beer’s name was derived from the original Budvar Brewery of Budweis, Germany, in the present Czech Republic. This was the Royal Brewery of the Holy Roman Emperor dating back to the early Middle Ages. Effective October 31, 1970, however, Frank Hahne Jr. was prohibited from the using the Budweiser name by a Federal Court order.

In 1967, because of no heirs and the fact that he was losing interest, Frank Jr. had sold the brewery to the Pittsburgh Brewing Company for $1 million, as the Budweiser name case was preceding through the appeals process. A temporary production output problem for Iron City and the DuBois competition was eliminated at the same time. Five years later, 1972, the DuBois Brewery was closed forever. The Pittsburgh company had been bound by the terms of sale to keep the DuBois plant operating for those five years. While under the ownership of Iron City, the Budweiser name case was settled with Anheuser-Busch for a reported million-dollar profit for Pittsburgh Brewing, which had won the U. S. Supreme Court decision. So in effect, Iron City Beer got the DuBois Brewery for next to nothing, however over 100 jobs were lost.

The brewery building complex, which had been used by various businesses over the decades since closing as a brewery, was demolished in 2003. Clearfield County took over the largely condemned and abandoned area and tore down the derelict structures that summer. First to go was the H & G Ice Company followed by the stock house, offices, and, finally, the huge main brewery building and smoke stacks. During the demolition, the whole rear side collapsed unexpectedly with a loud crash and a billow of dust. Luckily, the workmen were on a break and no one was hurt. Rubble was piled to make a ramp that enabled the cranes to reach and safely remove the tall smokestacks. The powerhouse and the smaller outbuilding shops were the last to go. A DuBois landmark was gone. 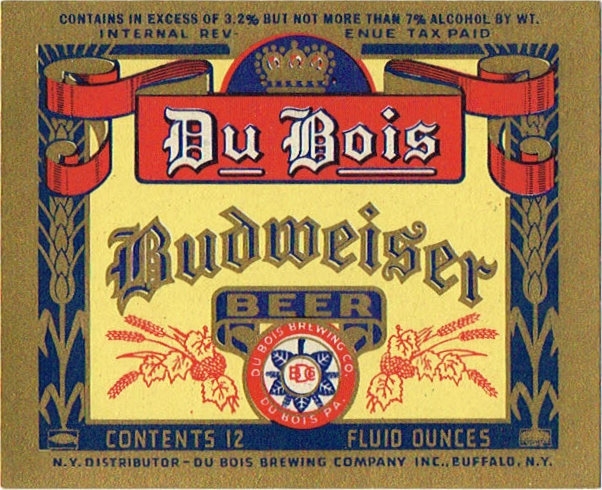 Curiously, the DuBois brewery started marketing a beer under the name DuBois Budweiser in 1905. Not surprisingly, Anheuser-Busch brought suit in 1908, but dismissed it and the two brands were marketed simultaneously until DuBois finally stopped making its Budweiser in 1972, after it was owned by Pittsburgh Brewing. Here’s the interesting story of the two Budweisers, from a Metropolitan News-Enterprise article on Thursday, August 4, 2005

Anheuser-Busch long tolerated the operations of DuBois Brewery, maker of “DuBois Budweiser.” It did sue the small Pennsylvania brewery for infringement in 1908, but dismissed the action without prejudice the following year, supposedly because company president Adolphus Busch was in ill-health and conserving his energies. It wasn’t until 1940 that it filed a new action, 35 years after the introduction of “Dubois Budweiser.”

The DuBois Brewing Co. of DuBois, Pa., contended in Federal District Court Monday that the name “Budweiser Beer” is a geographic and descriptive name and is not the exclusive name of the Anheuser-Busch Brewing Corp. of St. Louis. Judge R. M. Gibson heard arguments in a suit entered by Anheuser-Busch to bar the Pennsylvania company using the name Budweiser for its products. “We have a great mass of testimony to show that where Anheuser-Busch Budweiser and DuBois Budweiser are sold together, there is no confusion,” Elder W. Marshall, former Allegheny county judge and counsel for the DuBois company, declared. “The bartender knows his customers and knows which Budweiser they want,” he continued. “Where a stranger asks for Budweiser, the bartender asks him, ‘Anheuser-Busch or DuBois?’” Marshall said Anheuser-Busch had no exclusive right to the name when DuBois first used it in 1905 and that nothing has occurred since to justify issuance of an injunction against DuBois using the name.

Gibson held on Sept. 9, 1947, that “Budweiser” was not a geographic term as applied to the product of either litigant. The beer of neither brewer came from Budweis. And the word was not a mere description because there was no such thing as a Budweiser process for making beer. It was, plainly and simply, a trade name, he found.

Declaring DuBois to be an infringer in using that trade name, the jurist said:

“In the instant case the Court has had little difficulty in determining that in 1905, when defendant adopted its trade name, the name ‘Budweiser’ identified beer so marked to the general public as the product of Anheuser-Busch.”

As to laches, Gibson wrote:

“While the delay in bringing the action has been great, it must not be forgotten that defendant faced the fact that suit might again be brought when it consented to the withdrawal of the 1909 action, and that since the withdrawal it had notice that plaintiff was not consenting to its use of the trade name.”

The majority of a three-judge panel of the Third U.S. Circuit Court of Appeals saw it differently. Judge John J. O’Connell remarked in his May 12, 1949 opinion:

“Certainly we have found no case in which injunctive relief was granted after an inexcusable delay for a comparable period of time….In our view, this is not merely a matter of laches; Anheuser has been grossly remiss.”

O’Connell said of the dismissal in 1908:

“The conclusion is irresistible that the Association feared the outcome of its 1908 suit, and that the long delay prior to the filing of the instant complaint amounted to at least an acquiescence in use of the word by DuBois, which Anheuser should be estopped to deny at this late hour, if it was not an actual abandonment of the exclusive right as far as DuBois was concerned.”

The DuBois brewery was purchased in 1967 by Pittsburgh Brewing Company which continued to produce DuBois Budweiser. It ceased production in 1972 following an adverse decision in the U.S. District Court for the Western District of Pennsylvania.

A 65-year court battle over the use of the name “Budweiser” by two brewing companies apparently came to a head Wednesday when a federal judge shut off the tap on “DuBois Budweiser.”

Judge Louis Rosenberg ruled in U.S. District Court that the name “Budweiser” is now the exclusive trademark of Anheuser-Busch, Inc., of St. Louis….

The two companies in the past reached several court agreements limiting the area in which the DuBois product could be sold, but each agreement was marred by charges of violation. 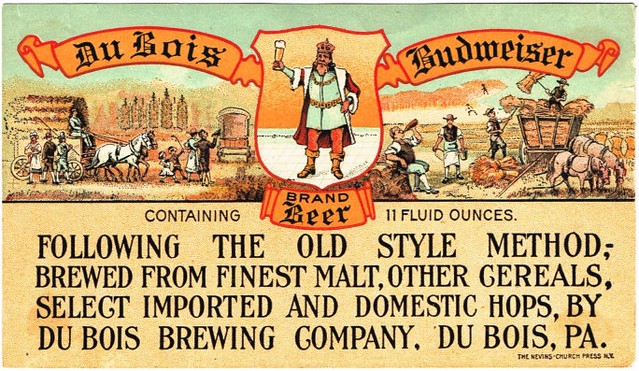