Today is the birthday of Franklin Pierce Lauer (November 2, 1852-March 10, 1926). He was born in Reading, Pennsylvania, and was the son of Frederick Lauer. He followed in his father’s footsteps and also became a brewer. After being sent to learn brewing in Germany, upon his return he became the brewmaster at his family breweries, and began running the breweries after his father retired in 1882.

Here’s a biography of Lauer from “Biographies from Historical and Biographical Annals” by Morton Montgomery, published in 1909:

Franklin Pierce Lauer, brewer at Reading since 1882, was born in Reading Nov. 2, 1852, the day on which Pierce was elected President of the United States. He received his preliminary education in the common schools, which he attended until 1866, when he and his brother were sent to Germany for their advanced education, and they remained three years, spending two years in the institutions at Ludwigsburg and Stuttgart, Germany, and one year at Lausanne, Switzerland. He directed his studies more especially toward the scientific manufacture of beer, porter, and ale for the purpose of qualifying himself to take charge of his father’s breweries upon his return home. While at Lausanne he showed great proficiency in music, and though still a boy the vestry of the French Lutheran Church elected him as the organist, which position he filled in a very satisfactory manner during his sojourn at that place.

Upon returning home his father placed him in charge of the two breweries as brewmaster and he displayed great skill in the production of malt liquors of a superior character. He discharged the duties of this responsible position with increasing success for twelve years, until 1882, when his father retired, and he organized the Lauer Brewing Company, of which he became the manager and principal owner. Since then, covering a period of twenty-six years, he has directed the affairs of the company in a most successful manner, bringing its productions to a high state of perfection and purity (as evidenced by the analysis of the State authorities), and giving them a popularity equal to that of any others in Pennsylvania. Its trade has been developed to extend into all the surrounding counties, and to numerous distant places, the large shipments being made on the railroad in improved refrigerator cars.

Mr. Lauer’s responsibilities at the head of his company have kept him so closely confined that he could not devote any time to political or social affairs. He, however, has been a liberal contributor to various public causes; and he has assisted in organizing several financial institutions at Reading, and participated in their management as a director: the Schuylkill Valley Bank since 1890; the Colonial Trust Company since 1900; and the American Casualty Company, since 1903. His only relaxation for some years has been an annual vacation of several weeks with his family to Pike county, where he enjoys the privileges of membership in the Porter’s Lake Hunting and Fishing Club, which owns several thousand acres of timber land on the top of the Allegheny Mountains, elevated 2,000 feet above the level of the sea. In August, 1891, he made an extended tour of three months through the principal countries of Europe.

In 1874 Mr. Lauer married Amelia Dora Heberle (daughter of William Heberle), by whom he had six children: Florence, who married William Y. Landis, of Reading; Carl Franklin; and four who died in youth. He owns and occupies a costly home on the site of the homestead on South Third street, near Chestnut, where he was born, and where his parents and grandparents had lived since 1826. In politics he is a Democrat; in religion a Lutheran, being a member of St. John’s German Lutheran Church, of which his father was one of the organizers in 1860.

This is the description of the illustration of the Lauer Brewing from the National Archives: 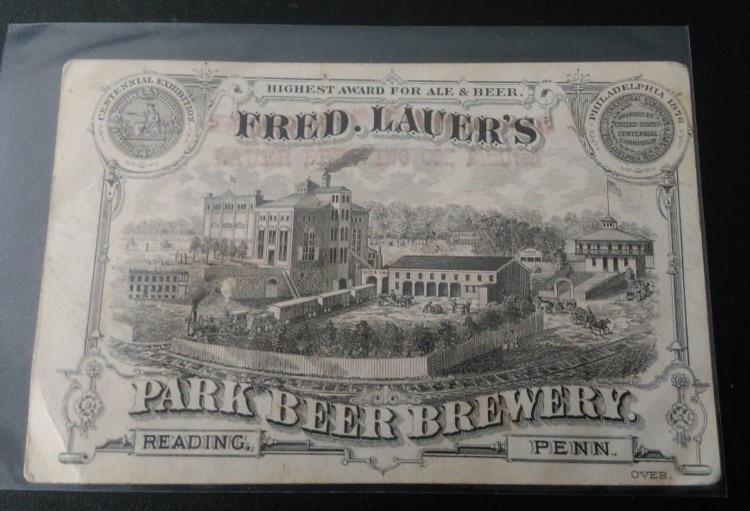 The brewery was also known as the Park Beer Brewery.