Today is the birthday of Peter Stroh (December 18, 1927-September 17, 2002). He was the great-grandson of Bernhard Stroh, who founded Stroh’s Brewing Co. in 1850. When he became president of Stroh’s in 1968, he was the sixth family member to run the business. 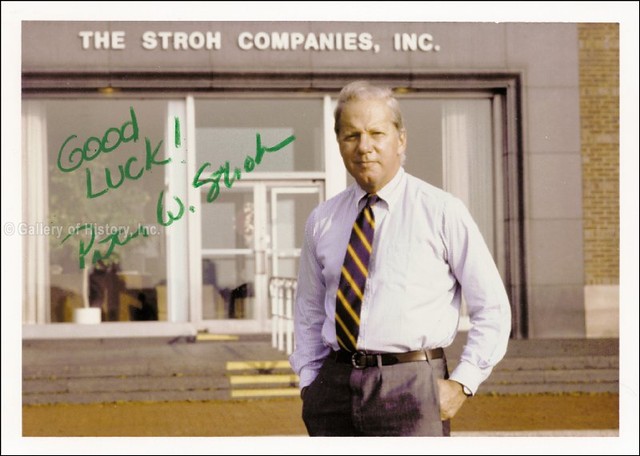 Mr. Stroh is remembered as a gracious elder statesman in the brewing industry. “Peter Stroh was truly a gentlemen’s gentleman,” said Mac Brighton, chairman and COO of Business Journals, Inc., publisher of Modern Brewery Age. “He was admired and respected by everyone in the brewing industry, friends and competitors alike.”

Stroh also made his mark as a tireless civic booster for the city of Detroit. “He never gave up on the city,” former Detroit mayor Dennis Archer told the Detroit Free Press after learning that Stroh had died. “He was a ‘laboring oar.'”

Stroh was the sixth family member to head the Stroh Brewery Co., which his great-grandfather, Bernhard Stroh, founded in 1850 on Detroit’s east side. Before coming to the United States, the Strohs had been brewers in Rhineland Palatinate since 1755.

Under Peter Stroh’s leadership in the 1980s, the company made a play to become a national brewer, but found itself outmatched by deep-pocketed competitors. Peter Stroh stepped down as chairman in 1997, and the Stroh Brewery Co. was out of the beer business by 1999.

Peter Stroh talked very little to the press, but friends said that the decline of the company’s position in the brewing industry was very painful to him.

Despite the Stroh Brewery Co.’s misfortunes, Stroh is remembered with respect in Detroit due to his remarkable civic commitment. Family members have reported that the 1967 Detroit riots forever changed his out- look on personal and corporate responsibility. Mr. Stroh had stood on the roof of the brewery and watched fires consume the city. “As a result of that sad experience, I began to wonder about the company’s and the family’s historic role in our community,” Stroh wrote in a family newsletter in 1997. “And quickly discovered that there really hadn’t been one for either.”

Stroh became active in the Urban League and the Detroit branch of the National Association for the Advancement of Colored People. He also worked with former Mayor Coleman Young on a variety of projects. “He and the mayor had a very strong, personal friendship,” said Bob Berg, Young’s longtime aide.

The Stroh clan used personal and corporate money to develop Stroh River Place, the renovation of the old Parke-Davis pharmaceutical complex at the foot of Jos. Campau.

The UAW-GM International Training Center is located on former Stroh land nearby. Stroh also was active with the Detroit Medical Center, the Detroit Symphony, the Detroit Zoo and the Detroit Institute of Arts? He served on the boards of more than half a dozen local organizations, including Detroit Renaissance, Detroit Economic GrowthCorp., and New Detroit Incorporated.

Son of Gari and Suzanne Stroh. He graduated from Princeton in 1951 with a degree in international affairs, and planned a career with the Central Intelligence Agency. But in 1952 a runaway truck in Washington, D.C., crushed him against a building and put an end to his nascent career in espionage. He was hospitalized for a year.

As a college student, Stroh had worked in the brewery as a janitor. After recovering from his accident, he spent time in the brewing and laboratory departments and quickly became skilled at the technical side of brewing.

He was elected to the Stroh board in 1955 and became director of operations in 1966. Named president of Stroh’s in 1968, Stroh teamed with his uncle, John Stroh, who was chairman and chief executive officer.

Stroh guided the family company from its regional roots to become a quasi-national brewery. Stroh’s shipped 3 million barrels in 1970 and 24 million in 1985.

Stroh bought F. & M Schaefer in 1980, and in 1982 purchased the Jos. Schlitz Brewing Co. At that time, Stroh was the number three brewer behind Anheuser-Busch and Miller.

But the acquisitions bred over-capacity, and Stroh chose to close its flagship brewery in downtown Detroit in 1985. “This was one of the most difficult decisions we ever made,” Stroh told the Detroit Free Press at the time.

The battle for market share against the top two brewers gradually drained the company’s coffers, although Stroh tried various imaginative strategies to survive. In 1989, Stroh and Coors came close to a deal in which the Golden, CO-based Coors would purchase Stroh. Unfortunately, the deal came unwound, and Stroh was forced to go it alone. In the mid-1990s, Stroh bought the troubled G. Heileman Brewing Co. The deal brought the company a handful of strong brands, but also more capacity than it could ever use.

Over the years, the Stroh brands were consistently rated tops among the major brands, but the brewery could never muster the marketing muscle to compete with A-B and Miller. In 1999, the company announced it would exit the brewing business, and it sold its breweries and brands to the Miller and Pabst Brewing Companies.

Outside his work in the beer business and the city of Detroit, Stroh made his mark as an outdoorsman and conservationist. He served as a member of the National Audubon Society board, did fund-raising for Ducks Unlimited, was a trustee for Conservation International, which specializes in Latin American issues, and sat on the board of actor Robert Redford’s Institute for Resource Management, which tries to settle environmental disputes without lawyers. He traveled the world, hunting birds and fishing.

“To have a sense of our outdoor past–our biological past–is as important as a sense of our historical and cultural past, and sometimes a lot more fun. I say that even as a former board member of the Detroit Institute of Arts and a current board member for the Guggenheim,” he once told the Detroit Free Press. “Wading through a cypress swamp is every bit as much fun as treading through the galleries.”

Stroh is survived by his wife, Nicole; two sons, Pierre and Frederic; one grandchild, and a brother, Eric. 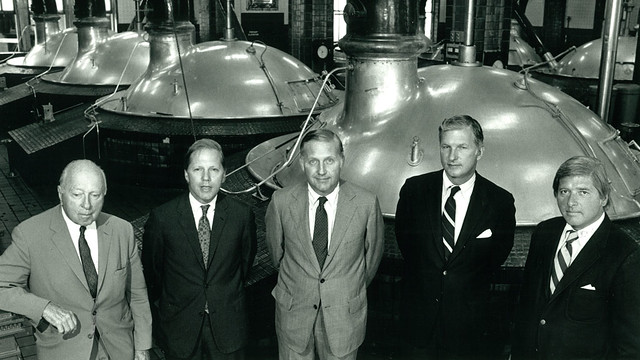 This is an “In Memoriam” from Crain’s Detroit Business:

Stroh shunned the limelight, but he took seriously his commitment to the family company and his community.

When Stroh became chairman and CEO of the brewery in 1968, it was still trying to recover market share lost in a 1958 strike, and it was clear national brands were squeezing out local ones.

Stroh began introducing products and acquiring other brands until by 1982 it was the third-largest U.S. brewer. But with acquisitions came crippling debt. In 1985, Stroh closed the Detroit brewery on Gratiot Avenue near Eastern Market where the Brewery Park development now sits; it is the headquarters of Crain Communications Inc., parent of Crain’s Detroit Business. Stroh attempted unsuccessfully to sell the company to Coors in 1989. He stepped down in 1995, and in 1999 the Stroh brands were sold to Pabst and Miller.

Despite his unsuccessful efforts to save the company, Stroh and other family members have made lasting contributions to the city of Detroit.

He led a $150 million redevelopment that became Stroh River Place at the site of the former Parke-Davis pharmaceutical company. An ardent hunter, fly fisherman and conservationist, he long advocated for opening the Detroit riverfront to the public and also was a driving force behind the federal designation of the Detroit River as one of 14 American Heritage Rivers.
He died in 2002 at age 74 from brain cancer. 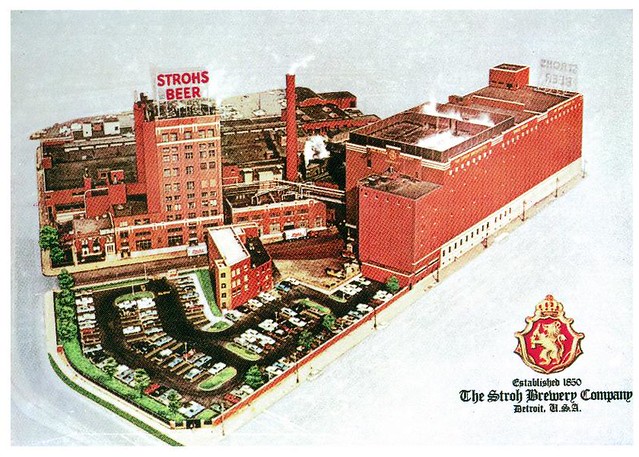 A postcard of Stroh’s Brewery in Detroit.

And this is the portion of Wikipedia‘s page for Stroh’s that includes Peter’s employment with the family brewery:

Upon Julius Stroh’s death in 1939, his son Gari Stroh assumed the presidency. Gari’s brother John succeeded him in 1950 and became Stroh’s chairman in 1967. Gari’s son Peter, who had joined the company following his graduation from Princeton University in 1951, became president in 1968.

In 1964, the company made its first move toward expansion when it bought the Goebel Brewing Company, a rival across the street. The company had decided it could no longer compete as a local brewer and was about to move into the national scene. One reason was a costly statewide strike in 1958 that halted Michigan beer production and allowed national brands to gain a foothold. When Peter Stroh took over the company in 1968, it still had not regained the market share lost in the strike ten years earlier.

Stroh ended a 40-year relationship with a local advertising agency for a large national agency and began targeting the larger national market. Led by creative director Murray Page, Stroh’s came up with the slogan “The One Beer…”, and by 1971, Stroh Brewery had moved from 15th to 13th place nationally. In 1972, it entered the top 10 for the first time. A year later it hit eighth place. Peter Stroh’s willingness to depart from years of tradition enabled Stroh’s to survive, but the changes were hard to swallow for many Stroh’s employees. Stroh broke the company’s tradition of family management and recruited managers from companies such as Procter & Gamble and Pepsico. He also introduced a light beer, Stroh’s Light.

By 1978, Stroh’s served 17 states when it produced 6.4 million barrels of beer. By this time, the original Detroit facility was 128 years old and had a capacity of seven million barrels annually. As it became difficult to make efficient shipments to new markets in the East, the company recognized that it required a new brewery. The F. & M. Schaefer Brewing Company had fallen victim to the Miller beer wars and Stroh’s purchased all of Schaefer’s stock. In 1981, the combined breweries ranked seventh in beer sales. In addition, Stroh was able to take advantage of Schaefer’s distributors in the northeastern part of the country. The acquisition also brought Stroh three new brands: Schaefer and Piels beers, and Schaefer’s Cream Ale. The company now had a volume of over 40,000,000 barrels (6,400,000 m3) and 400 distributors in 28 states, Washington D.C., Puerto Rico, and other Caribbean islands.

Stroh’s head office used to be located at Grand Park Centre near Grand Circus Park and Woodward Avenue.
In 1982, Stroh bid for 67 percent of the Schlitz Brewing Company. By spring of that year, Stroh had purchased the entire company, making Stroh’s the third largest brewing enterprise in America: it owned seven brewing plants and reached the market value of $700 million in 1988 (according to Forbes). During the takeover, Schlitz fought a fierce battle in the courts trying to remain independent. Schlitz finally accepted the takeover when Stroh raised its offer from an initial $16 per share to $17, and the U.S. Justice Department approved the acquisition once Stroh agreed to sell either Schlitz’s Memphis or Winston-Salem breweries.

Forbes has an interesting article about the Stroh’s family business’ fall from grace, entitled How To Blow $9 Billion: The Fallen Stroh Family. 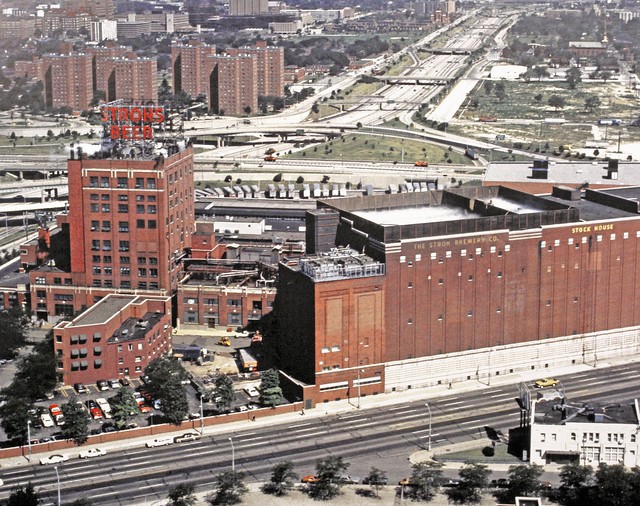