Today is the birthday of William H. Anderton (October 23, 1866-January 27, 1928). He was the son of James Anderton, who founded the Spring Water Brewery, later renaming it the Anderton Brewery. After his father died in 1905, William “took over management of the firm and it was merged in 1905 to become part of the Pittsburgh-based Independent Brewery Company (1905-1933). The local facility was closed in 1920 (like many other breweries) with the enactment of nationwide prohibition.” 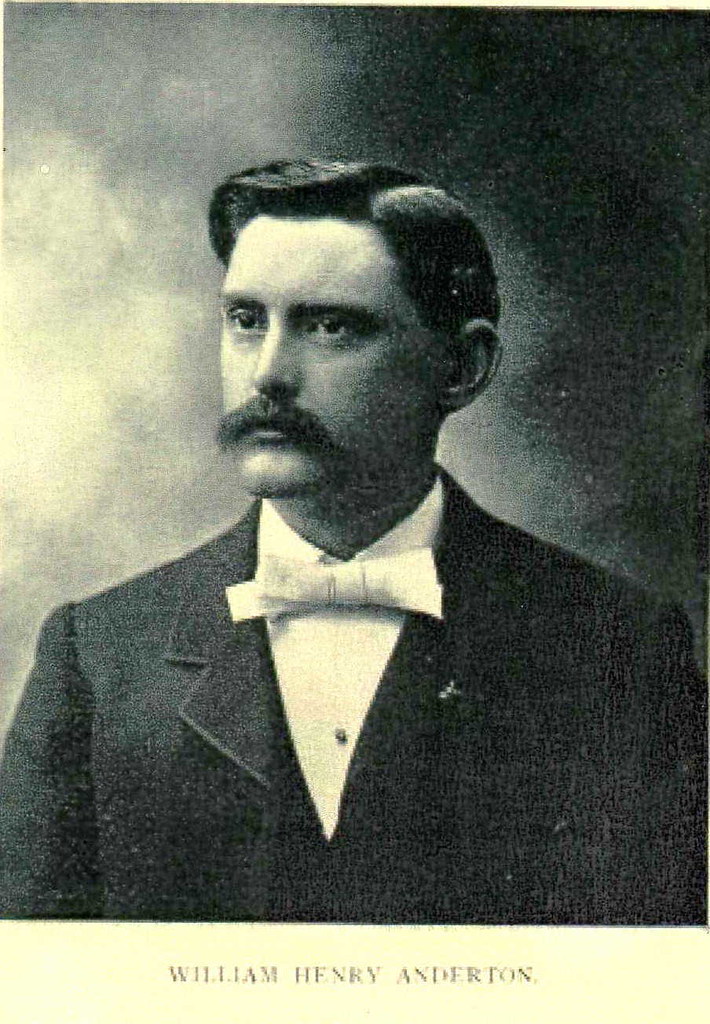 Here’s a biography of Anderton, from “Biographical Sketches of Leading Citizens of Beaver County, Pennsylvania, published in 1899:

WILLIAM HENRY ANDERTON, secretary, treasurer and general business manager of the Anderton Brewing Company of Beaver Falls, Pa., whose portrait we present on the preceding page, received his primary education in the Beaver Falls schools,-taking a collegiate course at the Iron City Business College of Pittsburg, Pennsylvania. In 1883, he entered the employ of the Hartman Steel Co., of Beaver Falls, in the capacity of clerk, remaining in their employ until 1889. He was a prime mover in, the organization of the Union Drawn Steel Co., and was secretary and treasurer of that company, until December, 1890. At that date, Mr. Anderton became secretary, treasurer and general business manager of the Anderton Brewing Co., which position he still holds. He assisted in organizing the People’s Water Company in 1897, and is its vice president. He is a believer in the principles of Democracy, and an active worker for that party. Socially, he is a member of the Ma-sonic fraternity, being included among the members of Beaver Valley Lodge, No. 478; he is also treasurer of the B. P. O. E. lodge, No. 348.

William Henry Anderton is one of a family of five children. He was born October 23, 1866, is a son of James and Betty (Green-wood) Anderton, and grandson of James and Sarah (Morris) Anderton. His grandparents came to America from England in 1856, accompanied by their son James, and settled at Fallston, Beaver county, Pa., where their two sons, John and Joseph, had located a few months previously. There father and sons worked in the mines for some years. John died at Fallston, in February, 1899, but Joseph now resides in Rochester, Pa. The be-loved father departed this life in May, 1879, at the age of seventy-nine years, and was preceded to the grave by his faithful wife and companion, who died in March, 1878, in her eighty-fifth year.

James Anderton, the father of William Henry, was born in Streetbridge, Royston, Lancastershire, England, June 26, 1830. He worked for eighteen years in the mines in his native place, beginning at the early age of eight years. In his youth he had no educational advantages whatever,-his only mental training being a night school organized by himself and his fellow miners, known as the “Youth’s Seminary.” There the boys taught each other, being too poor to afford an experienced teacher. The school organized by these lads has grown into a famous institution of learning, and is now known as the Literary Institute of Oldham, England.

James Anderton accompanied his parents to America when twenty-six years of age, worked in the mines at Fallston, until 1866, and then removed to New Brighton, Pennsylvania. He continued to follow this occupation at the latter place until March, 1868, when he removed to Beaver Falls, purchased his present residence, and engaged in the hotel business. The following year (1869), he went into the brewing business in a small frame building, situated quite near the elegant structure in which he at present officiates. The first brewing was made November 30, of the same year, and consisted of only nine barrels. In 1875, Mr. Anderton built the old part of the present structure, and with a much increased capacity, he continued to brew ale and porter until 1895, when he built a large brick addition, with all the modern improvements, and began brewing beer. The Anderton Brewery is now one of the most complete up-to-date breweries in Pennsylvania, and has a capacity of 30,000 barrels per year. There are many larger breweries in the Keystone State, but none more complete.

While, still in his native land, James Anderton was united in marriage with Betty Green-wood, a daughter of Joseph and Mary Greenwood. This event took place in 1852, and their union is blessed with five children, viz.: Jonathan ; Mary G.; William H. ; William H., second ; and Sarah A. Jonathan was born June 2,2, 1853; he is vice president of the Anderton Brewing Company. He wedded Margaret Hart, a daughter of Hilton and Ann Hart, and their home is made happy by the presence of four sons: James, Hilton, Jonathan, Jr., and William H. Mary G. was born February 1, 1858. She became the wife of C. W. Rohrkaste, who is now superintendent of the Anderton Brewery. They have three children: James A.; Mary A.; and Florence E. William H., the third child, died at the tender age of five years, and the same name was given to the next child. William H., the fourth child, is the subject of this brief sketch. Sarah A., the fifth child, was born October 14, 1869, and died in early childhood, aged three years.

James Anderton is a fine illustration of a self-made man, which in a great measure is due to his progressiveness, reliability and integrity. He ranks among the most esteemed citizens of Beaver Falls, and takes an active interest in fraternal organizations, being a member of Lone Rock Lodge, K. of P.; Valley Echo Lodge, I. O. O. F.; Mechanics Lodge, A. O. U. W.; and Beaver Valley Lodge, F. & A. M., of which he has been treasurer for the past nineteen years. He was one of the organizers and original stockholders of the Union Drawn Steel Co., and is one of the stockholders of the People’s Water Co., of Beaver Falls. In his religious convictions, the elder Mr. Anderton is an Episcopalian, of which denomination he and his family are members. Politically, he is a stanch Democrat, but could never be persuaded to seek or accept public office.

William Henry Anderton chose for his wife Emma J. Bailey, a daughter of James and Emma Bailey. In his business ventures he has met with success and, like his father, he is known to be an upright, honorable man. His home bears evidence of comfort in all its surroundings, and he always lends his aid and influence to the support of measures which he believes will be conducive to the general good. 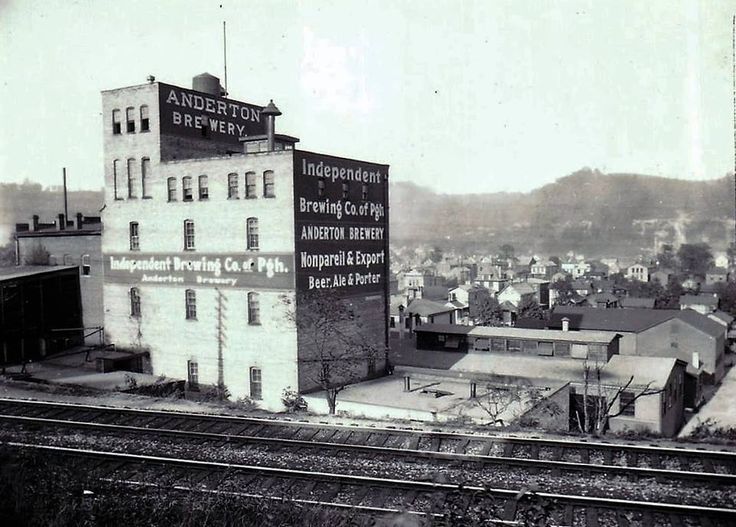 The Anderton Brewing Co. was located in Beaver Falls, between 23rd and 24th streets near the railroad tracks. The local owners would sell their company in 1905, but the brewery remained in Beaver Falls producing beer until 1922. 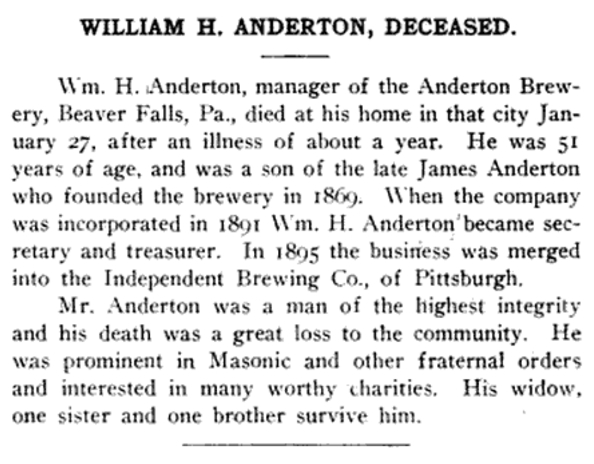 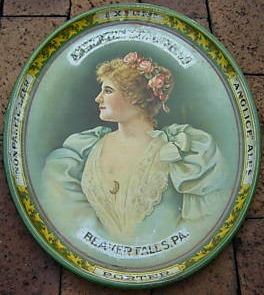