This has been a brutal month for me, in the last few weeks I’ve been to Denver, Portland and am writing this from Mammoth Lakes, California, where I’m attending a CSBA meeting and beer festival. So the Bulletin has suffered, but I didn’t want to miss this month’s Session because it’s an idea that I strongly believe in. I’ll try to be brief for this one (at least brief for me) since I have a speaking engagement in a few hours. Our host for the month, Greg Clow, chose fruit beers for this month’s topic and it’s another worthy one.

The use of fruit in beer, of course, is not a new phenomenon by any stretch of the imagination. The Belgians, for example, have been using fruit in lambics for centuries. I always chuckle to myself when people make allusions to fruit beer not being for men, without having the foggiest notion what their talking about. I’d love to see their face when they try their first sour cherry lambic and can no longer sustain that argument. Fruit beers are, according to taste, for everybody. It’s probably a good idea to like the fruit used in a particular beer, and to have it be not too sweet or not too sour, depending on your own tolerance and preferences. But there’s such a wide range and variety of fruit beers that there’s undoubtedly one to suit any person’s tastes.

Off the top of my head, here’s just a few different fruits that are or have been used in beer:

This list is merely to show the amazing diversity of different fruits used in beers. No two are alike, and so saying you don’t like fruit beer is like saying you don’t like people. There’s just too many variables to make such a blanket statement. I think it comes down to perception again of some weird prejudice in the U.S. where fruit in beer is seen as unmanly, as ridiculous a notion as I can imagine. There’s just too many good flavors here to ignore them over masculinity. But I guess that’s more for the rest of us.

When fruit beers became trendy fifteen years ago, there were certainly some that were better than others and a few used too much extract, in my opinion. But at some point there seemed to be something of a backlash for reasons unknown, and a lot of breweries quietly dropped their beers made with fruit. Today, breweries that still make fruit beers are generally the ones where their popularity never waned and they just continued making them without worrying too much about how they were perceived. Customers were buying them, and that was really all that mattered. Happily, new breweries are also venturing into fruit beer and seems pretty clear to me that they’ll always be around, at least as long as people care about flavor and how things taste.

Russian River Brewing recently added another fruit to the list of fruit beers, the plumcot, which is a hybrid cross between a plum and apricot. It was crossbred by none other than Luther Burbank right in Santa Rosa, just a few blocks from the brewery. That’s why brewer Vinnie Cilurzo chose it, because he could use a local ingredient created right in his own backyard.

Plumcots are also called Pluots, but the two are not interchangeable. Pluots are a variation on Burbank’s Plumcot created by Floyd Zaiger. Pluots are three-quarters plum and one-quarter apricot whereas plumcots are closer to 50-50. Pluots are also a registered trademark owned by Zaiger, a practice that I understand but loathe on many levels. 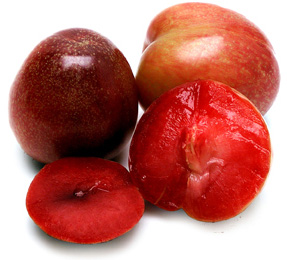 The beer is Compunction, a blonde ale brewed with plumcots. It had an original gravity of 1048 and is 5.8% abv. It’s slightly cloudy with golden color and a thin white head. Brett is the first aroma that hits you with fruity esters coming closely behind. The sweetness is puckering and works nicely as a contrast for the Brettanomyces. It’s surprisingly refreshing and light, given its strength. The beer is also aged in wooden barrels, but the beer’s strong flavors don’t allow much barrel characteristics to come through, really only a touch. Another interesting beer from Russian River Brewing.