On November 15, The Bistro in Hayward, California held their 3rd Annual West Coast Barrel Aged Beer Festival. On tap were over 60 Barrel Aged Beers, a few in bottles. The weather cooperated by being unseasonably warm with temperatures as high as 90! It was hard to believe it was the Ides of November. Vic Krajl, Bistro owner, had been inspired by GABF and set up a new tap system using PVC pipe and served beer from pitchers, allowing more beer to be served in smaller space, which had the added benefit of making getting a beer quicker, too.

There were a lot of very tasty beers this year, such as Deschutes’ Mirror Mirror, Fifity-Fifty’s BART (a blend of barleywine and oatmeal stout), He’Brew’s Bittersweet Lenny’s RIPA (a rye IPA aged in a rye whisky barrel), a 2006 vintage of the Lost Abbey’s Angel’s Share, Russian River’s newest beer — Consecration.

And speaking of Duchese De Bourgogne, a personal favorite, it was great to try some on draft since it’s usually only available in bottles. There were a few other beers at the festival on draft that were a treat to try just for that reason, which included Allagash’s Curieux and Rodenbach Grand Cru.

My favorite beer name was a three-way tie. First there was Bear Republic’s Cuvee du Bubba and Valley Brewing’s Effingreat. And Craig Cauwels’ homage to the sour beers that Vinnie Cilurzo makes at Russian River, Vindecation has an interesting back story. Craig originally submitted it to the TTB as “Vin.de.cation” but the feds rejected it because having it begin with “Vin” they felt might confuse consumers into thinking Schooner’s was implying it was a “vintage.” So the dots were removed, obscuring the meaning just a little bit. The name is actually a portmanteau, which is a word formed by combining elements of two or more words to create a new one. Vindecation stands for “Vinnie deserves a vacation.” 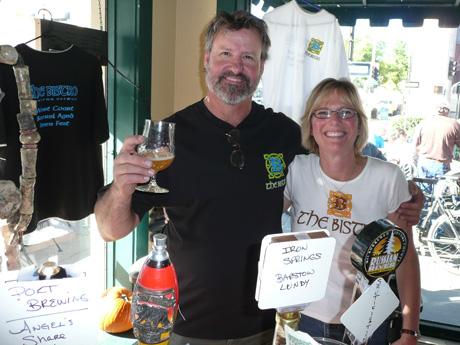 Bistro co-owner Vic Krajl and Tammy at the entrance to the festival.

For more photos from this year’s West Coast Barrel Aged Beer Festival at the Bistro, visit the photo gallery.