Today is the 49th birthday of Lee Chase, co-owner of Blind Lady Ale House in San Diego, and brewer at Automatic Brewing, located in the Blind Lady’s back room, and brewery consultant to the stars. Chase was also the head brewer at Stone Brewing for nearly a decade and oversaw the building and installation of the new brewery in Escondido. Lee’s a terrific brewer and a great beer ambassador, and also great fun to hang out with a share a pint, which I was able to do a few Decembers ago at the Stone Vertical Epic Tasting. Please join me in wishing Lee a very happy birthday. Lee at Beer School for CitySearch San Diego in 2008. Lee, with Meg Gill, Garrett Marrero and Matthew Brynildson at CBC in San Diego a few years ago. 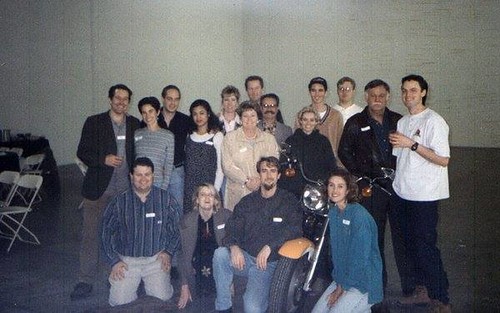 Lee, and several other Stone employees, along with some other beer people, around 1996.