Today is the 62nd birthday of Steve Parkes. Steve owns and runs the American Brewers Guild, which trains brewers. I’ve known Steve for a number of years now and he’s one of my favorite Brits in the industry. I had the pleasure of writing a profile of him for Beer Advocate magazine a few years ago, from which I learned the following. Steve studied brewing sciences at Heriot-Wyatt University in Edinburgh and worked at several small UK breweries before moving to Maryland to open British Brewing (later known as Oxford Brewing). He then moved to California and created Red Nectar for Humboldt Brewing, which is also where he caught the teaching bug. Eventually buying the ABG school in 1999, several years ago making the leap to running the school full-time. In 2009, Steve was awarded the Russell Schehrer Award for Innovation in Brewing by the Brewers Association at CBC in Boston. Steve said at the time. “It’s gratifying when someone notices what you’re been doing every day. It just feels tremendous, like standing on the shoulder of giants. The willingness to share is the best part of this industry. I love being part of a working community that thinks like that. It makes you a better person.” Join me in wishing Steve a very happy birthday. 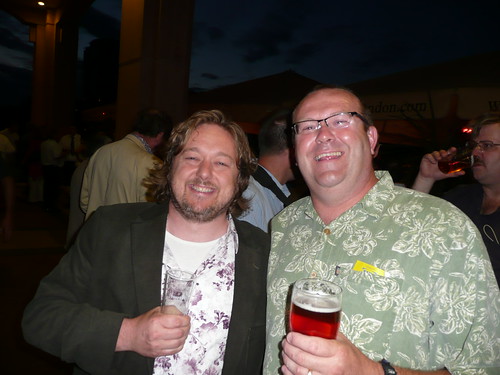 Steve at Cantillon in Brussels.