Today’s artist comes from the very early days of England’s artistic beginnings. Before the 18th century, there was little that could properly be called “English art.” At that time, most art came from France, Spain, The Netherlands, Germany and a few others. That’s who English painters studied. But that began to change in the mid-1700 with such painters as Thomas Gainsborough, William Turner, John Constable, George Romney, Henry Raeburn and today’s featured painter, George Morland. While others painted portraits and some city life, Morland concentrated on rural life and, naturally, the county inn was often featured in his works. The initial painting that led me to Morland, pictured below, is known as Alehouse Politicians,, most likely painted during the 1790s. 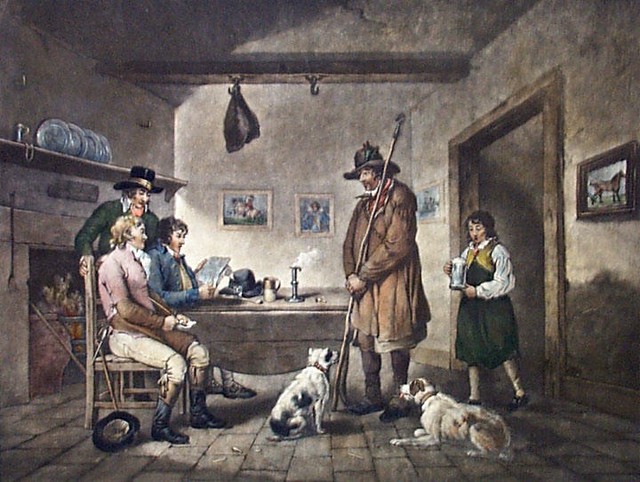 Like most of Morland’s popular paintings, others made copies of them as engravings to be sold to the public, such as this Mezzotint by W. Ward, published by Wards and Co. in 1801. 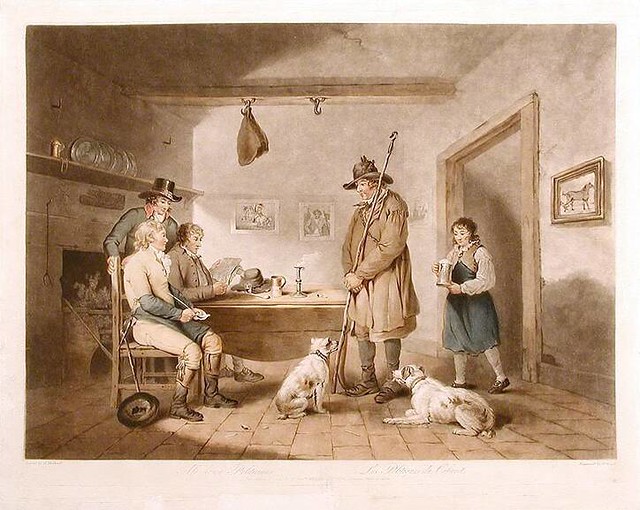 Plenty more of Morland’s rural paintings depicted inns, such as the Fox Inn, painted in 1792. Or The Bell Inn, from the Metropolitan Museum of Art: Which itself was redone as a black and white engraving: From his biography at Wikipedia:

Morland was born in London on 26 June 1763. His mother was a Frenchwoman, who possessed a small independent property of her own. His grandfather, George H. Morland, was a subject painter. Henry Robert Morland (c. 1719 – 1797), father of George, was also an artist and engraver, and picture restorer, at one time a rich man, but later in reduced circumstances. His pictures of Jaundry-maids, reproduced in mezzotint and representing ladies of some importance, were very popular in their time.

The finest of Morland’s pictures were executed between 1790 and 1794, and amongst them his picture of the inside of a stable, in Tate Britain, London, may be reckoned as a masterpiece. His works deal with scenes in rustic and homely life, depicted with purity and simplicity, and show much direct and instinctive feeling for nature. His coloring is mellow, rich in tone, and vibrant in quality, but, with all their charm, his works reveal often signs of the haste with which they were painted and the carelessness with which they were drawn. He had a supreme power of observation and great executive skill, and he was able to select the vital constituents of a scene and depict even the least interesting of subjects with artistic grace and brilliant representation. His pictures are never crowded; the figures in them remarkably well composed, often so cleverly grouped as to conceal any inaccuracies of drawing, and to produce the effect of a very successful composition. As a painter of English scenes he takes the very highest position, and his work is marked by a spirit and a dash, always combined with broad, harmonious coloring. He exhibited regularly at the Royal Academy from 1784 down to 1804, but few of his academy pictures can be identified owing to the inadequate description of them afforded by their titles.

Here’s yet another one, Outside the Alehouse Door, painted in 1792. And here’s one final painting, Outside an Inn, Winter, painted around 1795, and part of the Tate Collection: If you want to know more about George Morland, his Wikipedia page is a good start, but there’s also a good biography at the Online Encyclopedia. The Sterling Times has the most complete collection of his prints and Google Books has an online book about Morland, George Morland: his life and works. ArtCyclopedia has a good collection of links and more of his works can also be seen at The Old Print Shop, Intaglio Fine Art, the Art Renewal Center and the Tate Collection.