I’ve made pancakes substituting beer for the water, I’ve enjoyed Kentucky Breakfast Stout, once with beer pancakes. And I’ve had beer that tasted rather sweet, like maple syrup, too. But it never occurred to me you could make the pancake syrup with beer. And it looks fairly easy. I recently ran across an article about The Art of Making Beer Syrup in Outside magazine, and apparently bartenders have been making them for years to use in special cocktails. Given that the only cocktail I almost ever order is a gin & tonic, hopefully you’ll forgive my cocktail ignorance. Apparently it’s just water (or any liquid) reduced, sugar added.

Outside’s recipe is so simple, even I could probably make it:

For best results, pour your favorite beer into a pan and slowly simmer over low heat until it reduces to two-thirds of its initial volume. Then add in an equal proportion of raw brown sugar and stir until the sugar dissolves completely. Pour liberally over your favorite breakfast food and wait for your insulin levels to spike.

The Good Booze blog suggests adding “a few whole cardamom pods” and “one small vanilla bean, split” to give it a little more flavor. It looks like any beer could work, although malt-forward beers seem better suited than hoppier ones, but certainly some experimentation is in order.

Allrecipes also has their own recipe, and a bar in San Francisco, The Fifth Floor (which is closed now, and reborn as Dirty Habit) used to make a drink they called Hops & Dreams, using a syrup made from Anchor Steam Beer.

And one entrepreneurial soul is trying to start the Beer Syrup Company to make commercial beer syrups. 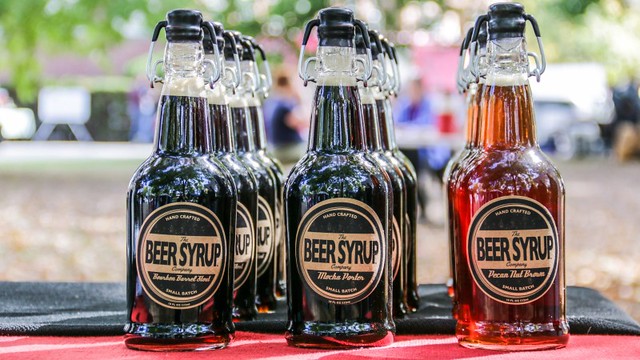