I meant to comment on this more fully before now, but my friend and colleague Stephen Beaumont beat me to the punch with his post, A Victory for Boire Moins, Boire Mieux. He had nearly the exact same thought I had, too, though not in French. Boire Moins, Boire Mieux translates as Drink Less, Drink Better, the unofficial ad hoc motto of craft beer.

I’m referring to a Wall Street Journal article published Thursday, Falling Beer Sales Have Brewery Mergers Over a Barrel, where they detailed how beer sales have fallen 2.2%, the first year since 2003 that showed negative growth in total beer sales volume (and the highest negative number since the 1950s). And sure that’s what the numbers say, from one perspective, at least. The Journal, an unabashedly pro-business paper, lost no time decrying the terrible implications for big business and especially the on-going merger-mania the big beer companies are engaging in. There’s also a handy chart. 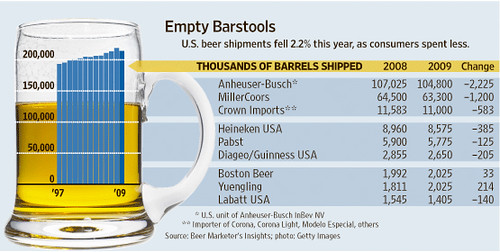 And sure, they all show declining volume, except for two near the bottom, Boston Beer and Yuengling. And that’s the tip of an iceberg that tells a very different story than the one the Wall Street Journal is telling. As Beaumont notes, “nearly every craft brewer I speak with is sounding quite happy with their sales figures from the preceding year and optimistic about 2010.” And that’s exactly what I’ve been hearing all along the hopvine, too. The 1500+ breweries that didn’t brew more than 2-million barrels a year, are doing quite well, thank you very much. Not all of them, of course — some brewpubs have been struggling with less people eating out — but overall they’re trending positively. And that’s a very different story than the Journal is telling.

So I’ll leave you with Stephen’s conclusion:

The BBC and Yuengling numbers are important because they represent what I believe is really going on, which is not so much a literal “worsening” of demand, but rather a shift in demand, coupled with a growing endorsement of the old French axiom boire moins, boire mieux, or “drink less, drink better.” Simply, the battle is between style and substance, and right now, substance appears to be winning!

The WSJ doesn’t see this because they’re used to looking only at the large, public corporation side of things, rather than the successful entrepreneur side. Then again, weren’t they the ones who years ago predicted that the craft beer craze was finished?