This is great news. Brian Dunn of Great Divide Brewing in Denver, Colorado, has announced that they will be building a brand new production brewery on a five-acre site in the River North neighborhood. When completed, it will take capacity to around 100,000 barrels, and ultimately to a maximum of 250,000 when all is said and done. Last year, Great Divide made a little bit more than 37,000 barrels of beer. Phase One will start in a couple of months, which is to demolish the abandoned auto parts warehouse that currently sits on the land. Next, they’ll build a 70,000-square-foot warehouse to use for storage of kegs and packaged beer, a priority. That should be finished by the spring of 2015, qnd will also include a new canning line, meaning that Great Divide will begin canning their beers next year.

According to the Denver Post, “A tasting room and beer garden adjacent to the new production brewery – overlooking a planned city park, the South Platte River and the mountains beyond – is at least two and possibly three years down the road.” Once the brewery is operational, they’re repurpose the existing downtown brewery for smaller batch beers and special releases.

Congratulations to Brian and the brewery. I can’t wait to see the new brewery up and running. 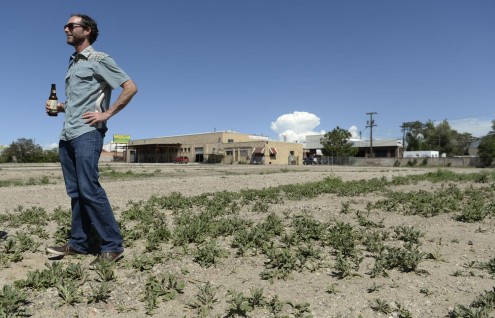