Today is the birthday of Carl W. Conrad (April 1, 1843- October 26, 1922) Conrad’s widely believed to be the person who created the name Budweiser, and was a friend of Adolphus Busch, whose brewery did a contract beer for Conrad, which was marketed as Budweiser, but which later became the property of Anheuser-Busch. 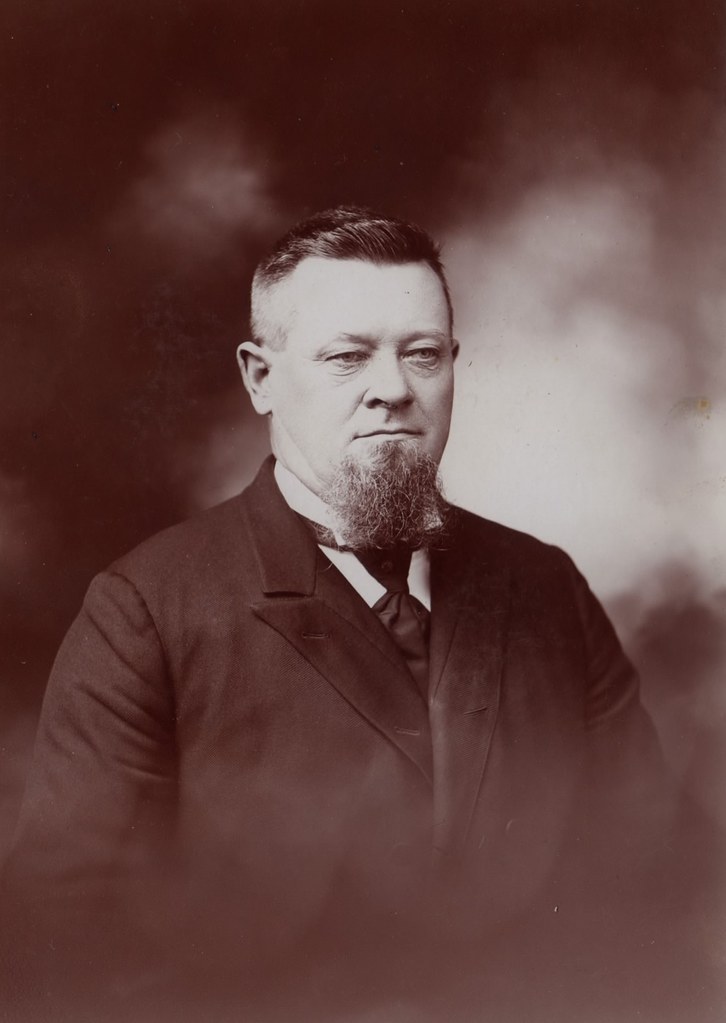 Conrad, a good friend of Adolphus Busch, is usually credited with helping to develop the recipe for Budweiser beer. The brand name was first registered in the U.S. by Conrad, an importer of wines, champagnes & liquors. The Anheuser brewery produced the brand for him under contract. C. Conrad & Company had offices in Germany & in St. Louis & Adolphus got the rights to Budweiser when Conrad’s company went bankrupt in 1882. To pay off Conrad’s debts to the Anheuser-Busch Brewing Association, the brewery assumed control of Conrad’s company & the brand name Budweiser. Conrad was given a lifetime job with Anheuser-Busch.

Anheuser-Busch’s own website spins the story differently than most accounts, with Busch taking credit for the Budweiser name:

In 1876, he and his friend, Carl Conrad, created an American-style lager beer that succeeded beyond anyone’s expectations. Adolphus coined the label “Budweiser”, a name that would appeal to German immigrants like himself, yet could be easily pronounced by Americans. Budweiser was a success and eventually, became the company’s flagship brand. 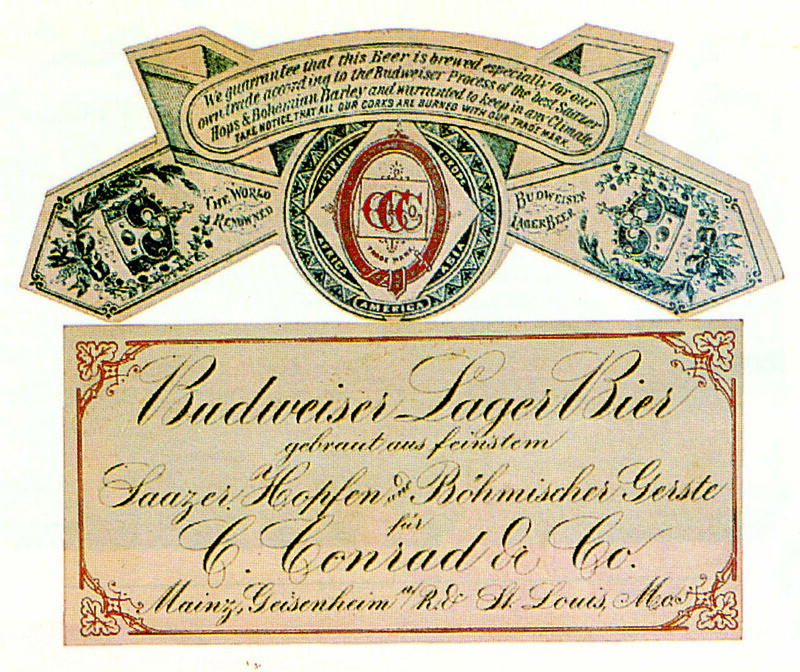 Maureen Ogle, a friend, and the author of Ambitious Brew, wrote about Conrad and the creation of Budweiser in an article in a 2006 article for All About Beer magazine entitled Making Beer American: How Bohemian Lager Swept the Country:

But in 1874 or 1875 (the precise date is not known), Busch and Sproule developed a second rice beer, this one for Busch’s friend Carl Conrad, a St. Louis importer of wine and liquor. Conrad was no brewer but he knew a profitable market trend when he saw one and he contracted with Busch to create and brew a “very pale, fine beer” that Conrad would bottle and sell under his own label.

Conrad wanted the beer to stand out in an increasingly crowded field of Pilseners, so he asked his friend to model the lager after the pilsener brewed in Budweis (Ceské Budejovice), an ancient Bohemian city where an “official” court brewery produced the “Beer of Kings,” a slogan Busch would later invert. Budweis brewers used Saaz hops and Moravian barley, but they employed a slightly different mashing method than did makers of Pilsener, and the resulting beer was a shade lighter in color and slightly more effervescent than its Pils counterpart. Neither Busch nor Conrad had been to Budweis, but they had visited Bohemia and tasted Budweis beer in other European cities. Conrad claimed that Budweis-style lager “was always the finest Beer [he] could get in Europe,” and that the “Budweiser process [made] the finest Beer.” 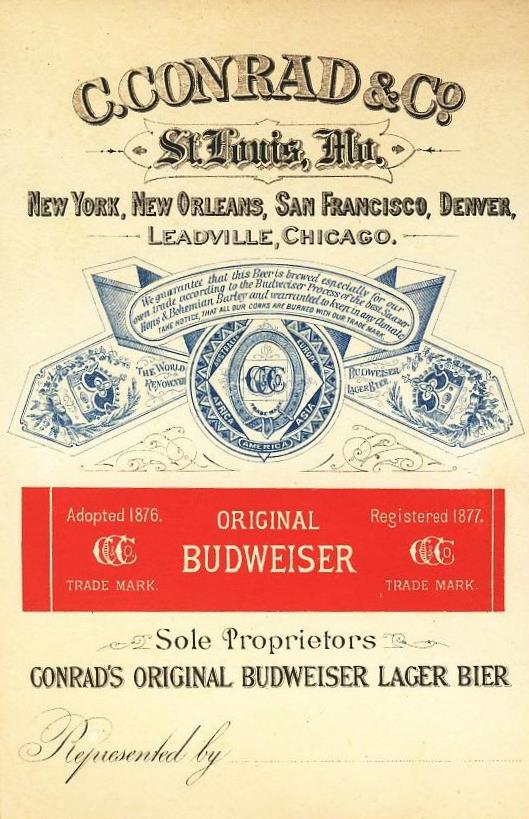 As she notes, it was Conrad who came up with the name:

The final result, which Conrad named after its place of origin, was a masterpiece of brewing prowess. Budweiser is “fine and elegant,” Conrad boasted. It “sparkles” and “has a very pretty flavor.” It’s not clear what his original label looked like, but the man who designed Conrad’s second label claimed that it included the word “champagne.” That would not be surprising because effervescent Budweiser looked more like Champagne than it looked like other beers, a comparison that Conrad fostered by corking the lager in Champagne bottles.

Conrad and Busch launched the lager by hitting the road. The two friends traveled around Missouri and to Arkansas and Texas talking up the beer and hunting for reliable sales representatives. Conrad also invested three thousand dollars outfitting a “fine place” in San Francisco “where people could find [his] beer.” He sold most of it to California but also shipped it to Chicago, New Orleans, Milwaukee, and Louisville, and cities in Texas, Utah, Wyoming, Nevada, and Alabama.

From the moment of its first public appearance in March 1876, Budweiser was a hit. Herman Kramer, Conrad’s California agent, pronounced the lager “an easy thing to sell.” “I never found a business so easy as this Budweiser,” he raved, and that despite it being “sold at a higher price than any other Beer in the country,” two dollars more per barrel than conventional lager. Even other brewers conceded Budweiser’s special character. “[I]t is the best bottled beer in this market,” said one. “I have drank Anheusers [sic] Bottled Beer, & the Budweiser beer is much the best.” Conrad sold a quarter of a million bottles of Budweiser in twelve months, and by late 1878, had sold six thousand barrels of the beer. 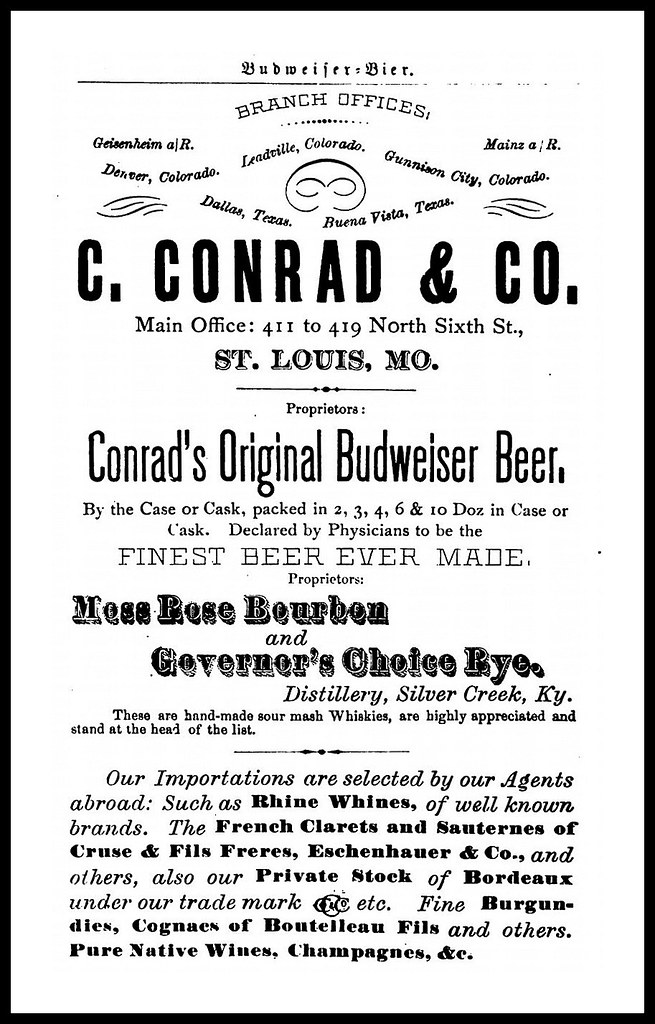 In a 2006 magazine article by Bill Lockhart, Pete Schulz, David Whitten, Bill Lindsey, and Carol Serr, entitled “Carl Conrad & Co. – The Original American Budweiser” they go further in depth about the story of the beer.

Although Carl Conrad was neither a brewer nor a bottler, he contracted with AnheuserBusch, then the brewers of St Louis Lager Beer, to brew and bottle his beer for him. Conrad advertised his beer as “the Original Budweiser,” and there seems to be no doubt that his was the first use of that name on the American market. Although he was only in business for about six years, his use of embossed monograms on export beer bottles assured him a place in the history of manufacturer’s marks. 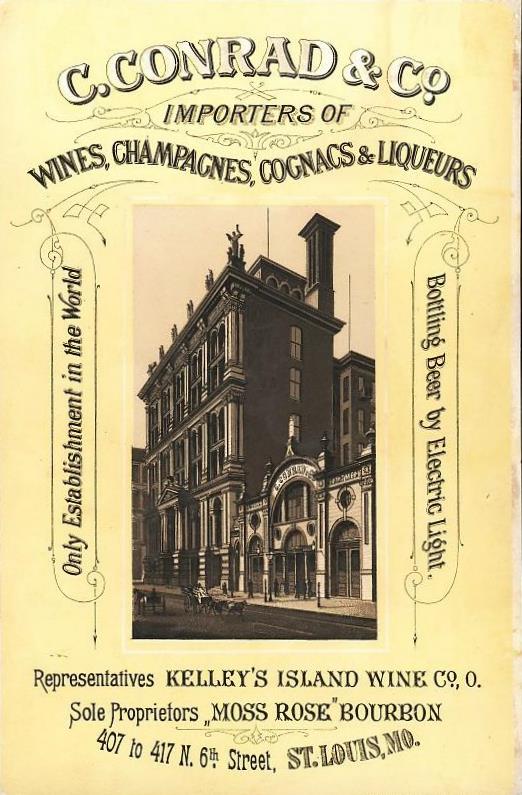 Carl Conrad, a friend of Adolphus Busch, toured Europe in the mid-1870s, returning by 1876. According to Clint (1976:74), Conrad dined at a small monastery in Bohemia “where he was served a brew he declared to be ‘the best he ever tasted.’” Upon his return, Conrad began setting up Carl Conrad & Co. to market Budweiser Beer (named for the town of Budweis in Bavaria), although Conrad neither brewed beer nor manufactured bottles. Adolphus Busch actually made and bottled the beer, and a series of glass factories made the bottles. Conrad was initially successful, rapidly expanding his territory until his beer was sold nationwide. However, the business went downhill in the early 1880s, and Conrad declared bankruptcy on January 15, 1883. Baxter [another historian] hypothesized that Conrad was forced out of business because of the bottle shortage in the West. Beer and other bottled products were shipped long distances by wagon under difficult conditions. Because of this, the empty bottles became an important commodity.

Miles [still another historian] confirmed this shortage during an earlier period, when he noted that “teamsters could purchase a dozen bottles of liquor in Missouri for four dollars each, drink the contents along the way, and trade the empty bottles for six dollars worth of produce each in New Mexico.” Thus, virtually all bottles were reused. It is particularly true of the Southwest that a proliferation of bottles was directly tied to the arrival of the railroad. For breweries to profit from container sales, it was important that most bottles be returned. Unfortunately for the original bottler, the bottles were often not returned to the owner (the brewery) but continued to be refilled by competitors at the point of sale or elsewhere. The railroads alleviated the problem to some extent, but there were still many remote areas where bottles continued to be valuable well into the late 1880s or even later. Baxter’s argument that Conrad may have lost so much money on bottles that he was forced into bankruptcy thus is plausible. Baxter’s hypothesis, however, fails to explain why other brewers remained in business under the same circumstances.

The New York Times (1/17/1883), however, offered an alternative explanation, claiming that the very success of Conrad’s venture led to its demise. Conrad had grown so fast that he “erected new buildings on Sixth street, entered them, and established branch houses throughout the country.” Because “their branch houses were so scattered they found it impossible to get in collections as rapidly as they were needed” (New York Times 1/23/1883). Clint [yet another historian] provided examples of this expansion, noting that Conrad opened Colorado “outlets” at Denver and Leadville in 1881 and two more at Gunnison and Salida in 1882. Although “collections” probably referred to money, the beer bottle problem noted by Baxter may also have contributed to the overall problem. At the top of the list of Conrad’s principle creditors was Anheuser-Busch, although Adolphus Busch informed the paper that Conrad’s assets were expected to be sufficient to cover the debt. A meeting of the creditors on January 22, however, showed that Conrad’s assets would actually be about $140,000 short of paying all his bills (New York Times 1/23/1883).

When Conrad declared bankruptcy in January 1883, the Lindell Glass Co. was one of the largest creditors, being owed between $32,000 and $33,000 by Conrad. Although the loss hit Lindell hard, a local source stated that Lindell’s “continuance in the bottling business is almost an assured fact” (Crockery & Glass Journal 1883:30) – and that certainly proved true.

According to the Anheuser-Busch sources, the company “acquired rights to bottle and sell Budweiser” in 1883, the year Conrad declared bankruptcy. The transfer almost certainly occurred because Anheuser-Busch was the largest creditor (much larger than Lindell) at $94,000. Busch apparently accepted the Budweiser trademark as payment of the debt. Carroll noted that Conrad “eventually became an employee of Anheuser-Busch Brewing Association,” although he was unclear about the time period. Conrad did not actually assign the trademark to Anheuser-Busch until 1891, and the “CCCo (sic) insignia and the name C. Conrad & Co. remained on the [paper] label until around 1920.” 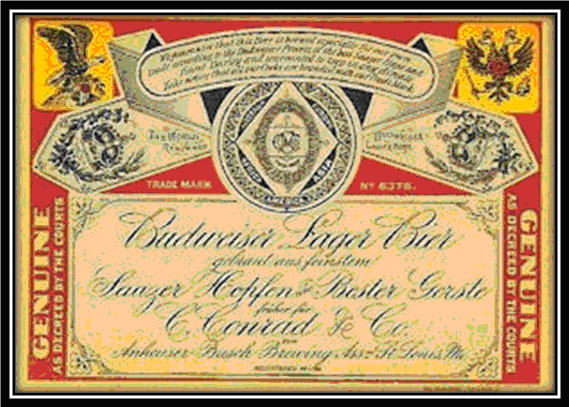 By 1886, Conrad’s Budweiser label was looking a lot like the Anheuser-Busch label it would become. See the Evolution of America’s Most Famous Beer Label for a look at the label’s progression from 1876 to 2000.