Today is the birthday of Emil Schandein (April 15, 1840-July 22, 1888). He was born in Bavaria, Germany, but emigrated to America when he was sixteen, in 1856. Arriving first in New York, he moved shortly thereafter to Philadelphia, and moved around quite a bit, until finally settling in Milwaukee, Wisconsin in 1866 where he joined the Philip Best & Co. brewery staff. That same year he married Best’s daughter Lisette, and her father sold the remaining half of the business to her husband, making Frederick Pabst president, and Schandein vice-president. Schandein was a director of the brewery from 1873-1888. When he passed away in 1888, Lisette was elected vice-president. 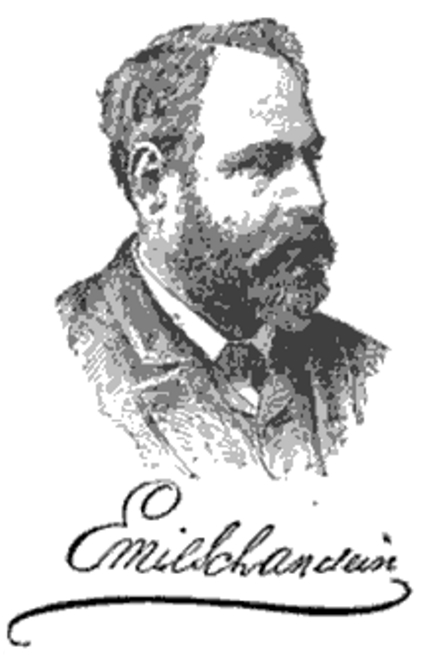 This is the Google translation of Emil’s German Wikipedia page:

Schandein was born in 1840 in Obermoschel . His parents were the royal tax and community beneficiary Joseph Wilhelm Schandein (1800-1862) and Louisa Schandein (b. Barth). His uncle was the historian Ludwig Schandein.

At the age of 16 he emigrated to the USA and settled in Philadelphia . After working in different cities, he moved to Watertown, Wisconsin, in 1863. There he married Elizabetha “Lisette” Best, a daughter of the breeder owner Phillip Best.

Together with his brother-in-law Frederick Pabst, he bought shares in his Philip Best Brewing Company and from 1873 until his death took the post of vice-president.

In addition to his work for the brewery, Schandein was one of the founders and first president of the German Society of Milwaukee. He was also director of the Northwestern Life Insurance Company, the Second Ward Savings Bank and President of the Milwaukee Brewers Association.

Emil Schandein died in 1888 during a stay in Germany. He is buried at the Forest Home Cemetery in Milwaukee.

Only after his death was in 1889, the Saddle Your Mansion, a villa in the German Renaissance style, on the 24th and Grand Avenue (now Wisconsin Avenue) in Milwaukee completed. The Milwaukee County Emergency Hospital was built in 1929 on the site of the building.

His widow, Lisette Schandein, assumed his post as vice president after his death until 1894. She died in 1905 during a stay in Germany. 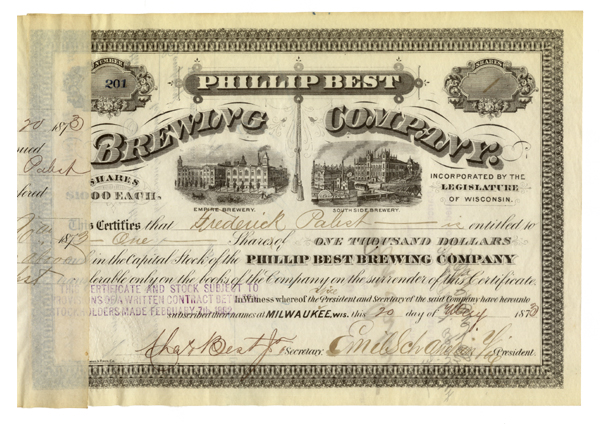 This is from the “National Cyclopaedia of American Biography, Vol. III,” published in 1891: 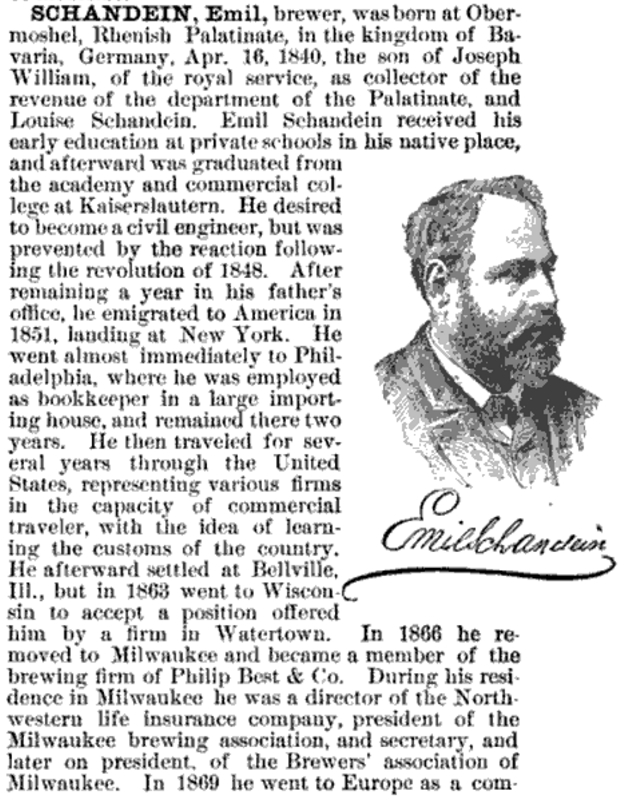 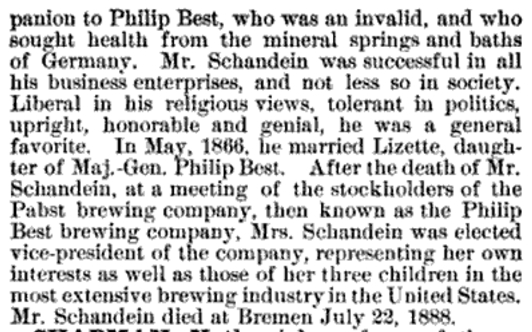