Today is the birthday of Herman Lackman (September 15, 1826-June 30, 1890). He was born in Germany, but came to the U.S. as a young man, settling in Cincinnati, Ohio. He founded what would become the Herman Lackman Brewing Co. with a business partner, J.H. Sandmann, and the brewery continued until 1919, when prohibition closed it for good. 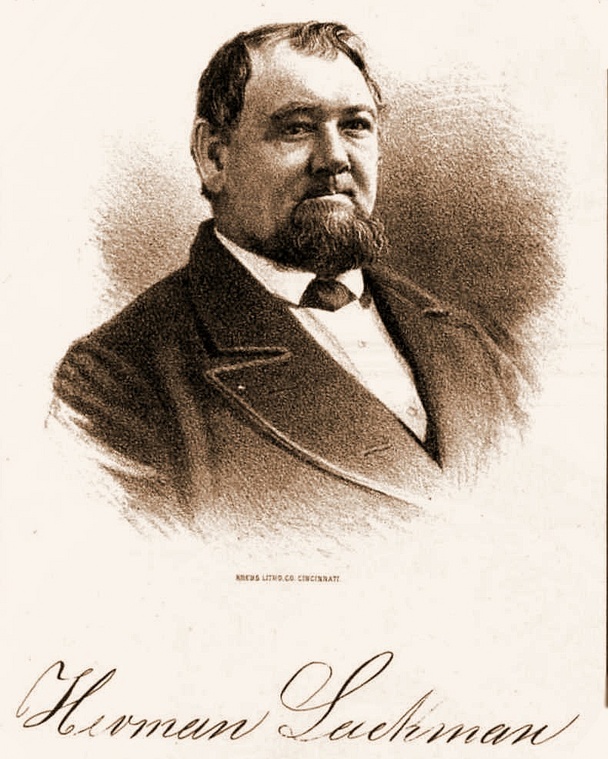 HERMAN LACKMAN, brewer, a native of Thedinghausen, near Bremen, in Germany, was born Sept. 15, 1826. After he received the usual elementary education, he helped his father (a farmer by trade) work in the fields, until the age of twenty. Without the hope of advancement at home, he moved to America in 1847, and, while learning the language of the country, he stopped in Baltimore, Md. Where he got a job as a farm laborer. In 1849 he came to the West, and settled in Cincinnati. Just two days after his arrival, he found employment in a sawmill where he earned seventy-five cents to a dollar the day. He remained there for eighteen months, until September 1850, and then got a different job paying a monthly salary of thirty-five dollars working for Brauer Schaller & ship, where he spent five years driving a lumber wagon and later a beer wagon.

This certainly was a modest start, but Mr. Lackman managed horses well, possessing a powerful frame and being capable of great labor, and there was something in the man above his calling, and what it was became apparent in 1855, when, by investment of his earnings he became in a small way a brewer himself. Knowing no gateway to success except the one inscribed “hard work,” he applied himself diligently to business, rapidly increased his sales, and through sound methods, straightforward conduct and the ability to organize and carry on a large enterprise, he gained a fortune.

In 1855, Herman Lackman and J.H. Sandmann leased the brewery of Louis Schneider on Agusta Street. Lackman had worked for Foss-Schneider. In 1860 the operation was moved to the property located at Sixth and Stone Streets because they needed more room. Their new property had a beer celler that could hold about 500 barrels. With their expansion they were able to increase the brewery’s output from 2000 barrels in 1855 to approximately 6000 barrels in 1865.

In 1868 Lackman bought out Sandmann’s shares in the company and renamed it, The Herman Lackman, and in 1890, The Herman Lackman Brewing Company. J. H. Sandmann, having retired from the business in 1868, died in 1872, with the respect of all who knew him. Herman Lackman conducted the business alone, and, as said, became the real founder of the present company. Herman Lackman believed in “beer as an agent of good”. He held, however, that to accomplish this good it must be pure-made of the pure malt of barley and hops alone. His principles became known and became part of his beer making. 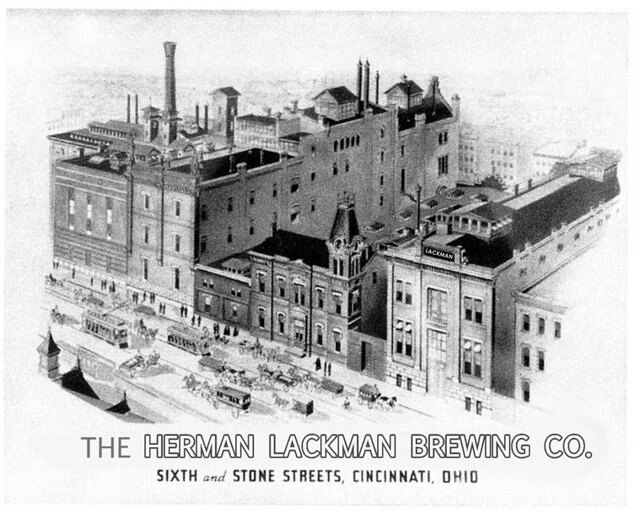 In the new building all modern methods of brewing are perfected. The company does its own milling. Its malt is made from the cream of the barley market. No steam arises from the brew kettle. The great engines move without noise or smoke. The vast ice machines are silently at work. Everything is as neat as the parlor of a painstaking house-wife, from floor to ceiling. Stone floors are clean and ceilings shine. Brasses are burnished and steel glitters.

With a model mill-house, brew-house, engine and boiler-house, whose cap-stone was laid three years after the founder’s death [see biographical sketch], and just that long after he had superintended the building of the foundations. In this building, except one small house, there is not an inch of wood. Stone, iron, steel and brass are its components. It is fireproof, and enduring, like the memory of the good man who planned it, whose four sons would carry out his designs.

One of them, Edward H. Lackman, has since followed his father to his long rest. He was the youngest son, an athlete and an enthusiast, like his brothers, in physical sports, but died early—not, however, before he had contributed his portion of loving labor to the enterprise with which the family name is identified.

Herman Lackman was prominent in city affairs, and served with honor in the school board, as president of the German Orphan’s Asylum, as president of the Third German Reformed Church, as trustee of the Bodmann’s Widows’ Home, director of the Sun Mutual Insurance Company, major in the militia, and president of the Cincinnati Brewers’ Association—which position his son Albert now so worthily fills. Open-hearted and charitable, thoroughly believing that his life work was one of real practical temperance reform. Mr. Lackman died in Cincinnati, June 30, 1890. His death, just as he was beginning extensive improvements to his business, was a public bereavement. He left four sons to take up his work where he left it off.

Also, Peared Creation has a short history of the brewery:

Herman Lackman was a native of Thedinghausen, Germany. At age 21 Herman saw no hope of progress in his country so he came to United States. From working in a railroad in Maryland to driving a lumber wagon and working in saw mills, Lackman did it all. It was in 1860 that Herman met up with another German immigrant, John H. Sandmann and together they established Herman-Lackman Brewery at Sixth and Stone Streets in Cincinnati.

After 8 years of doing business together, Lackman bought out Sandmann and took over majority stake in the brewery. At this point it was renamed the Herman Lackman, United States Brewery. In 1890, Lackman incorporates his business as Herman Lackman Brewing Co. In 1919, Lackman, like many brewers, found himself without a business due to the Volstead Act that ushered in the era of prohibition.

In 1933, after the repeal of Prohibition, the facility came to life again but it was bought by Hudepohl Brewing Co. and established as their second plant. 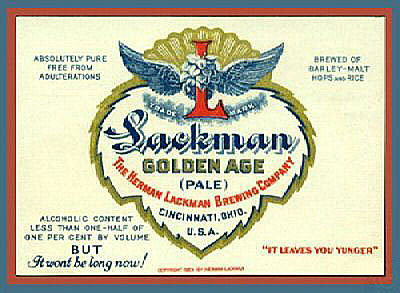 “Herman Lackman and J. H, Sandmann leased the City Brewery of Louis Schneider in 1855. They paid $50 a month for the brewery on Augusta Street. They invested $1600 to buy horses and wagons. Sandmann was the brewer and Lackman delivered the beer. In 1858 because they needed more room, the partners bought property at Sixth and Stone Streets for $13,000. By 1860 they were able to move their new quarters there. Their new plant had a beer cellar that could hold 5000 barrels. They had increased the brewery’s output from 2,000 barrels in 1855 to about 6,000 barrels in 1865.

Having established a successful business, Lackman felt confident enough to return to Germany for an extended visit. When he came back to Cincinnati in 1868, after almost three years, he bought Sandmann’s share in the company and renamed it the Herman Lackman Brewing Company. He paid his former partner $80,000 in this transaction.

In 1890 with $600,000 capital stock the business was incorporated. The brewery produced 45,000 barrels the same year. The plant now included a mill house, brewery building, and an engine and boiler house. All were constructed of brick, iron, and stone to prevent fires. A statue of Gambrinus, the ‘god’ of beer stoop atop the brewery.

Herman Lackman died in 1893. His sons took over the corporation then. Albert Lackman became president. Interestingly, he did not drink beer because it did not agree with him. Henry F. Lackman served as vice-president. Brother Edward H. Lackman was also a company officer. They expanded the brewery and production reached 60,000 barrels a year in 1894. Only barley was used in making the beer, no rice or corn.

When the brewery closed in 1919, Albert was president and treasurer; Henry, vice-president; and Herman W. Lackman, another brother, was secretary. They brewed and bottled Golden Age, a pale beer, Old Honesty, and Old Lager beers.” Cincinnati Breweries, Robert J. Wimberg (1997) 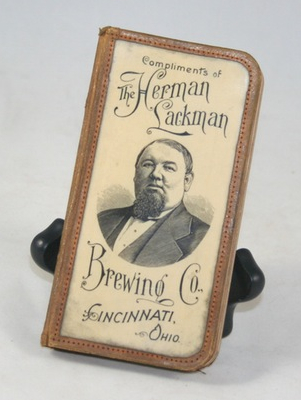