Today is the birthday of Jacob Leinenkugel (May 22, 1842-July 21, 1899). He was born in what today is Germany, but moved with his family to American when he was only three years old, in 1845. In 1867, along with John Miller, he co-founded the Spring Brewery in Chippewa Falls, Wisconsin. In 1884, Jacob bought out Miller and the name was changed to the Jacob Leinenkugel Brewing Co. Miller Brewing Co. bought the brewery in 1988, but it continues to be managed by the Leinenkugel family. 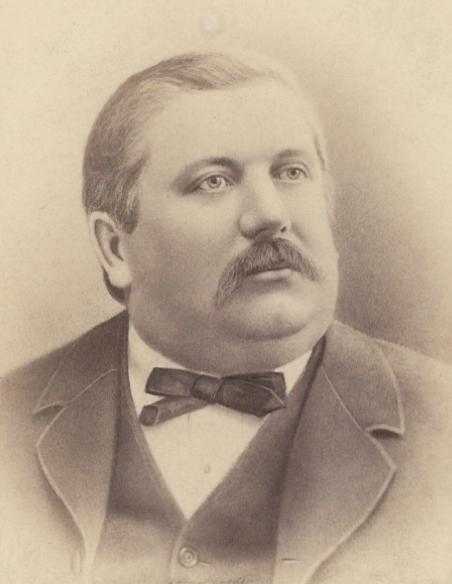 This biography of Jacob is taken from Find-a-Grave:

Jacob Mathias Leinenkugel, born in Germany (Prussia) in 1842, came to America with parents in 1845. He grew up in Sauk City, Wisconsin. There he and his four brothers were taught the art of brewing by their father, Matthias.

He married Josephine Imhoff, daughter of another German immigrant family from Highland, Wisc., in 1865. Shortly after the birth of their first son Matt in 1866, Jacob realized a growing desire for independence and a business of his own. Together Jacob, Josephine and baby Matt journeyed north into logging territory, eventually settling in Chippewa Falls. There, in 1867, he built a little brewery with his friend John Miller (no relation to the Miller Brewing Company).

Jacob built a home on the brewery property where his two daughters, Rose and Susan, and a second son, William, were born.

Josephine, in the tradition of pioneer women, worked beside her husband as he struggled to establish the small company. Josephine prepared three meals a day for up to 20 hungry men, in addition to caring for her family. As the brewery grew larger and the major expansion of the brewery started to take place, there were more employees to feed. She would rise at 3 a.m. to do the family (which now included three adopted children) wash before beginning breakfast for employee boarders at 5 a.m. Josephine died of acute pneumonia in 1890, at the age of forty-four, the winter before the expansion was completed. Family members remember Susan Mayer Leinenkugel, daughter to Josephine, describing her mother as having “worked herself to death.” The city newspaper wrote of Josephine after her death: She was a devoted wife and mother, one who was ever ready to strengthen in all labor, and comfort in all sorrow: one who faithfully performed the common duties of life, the noblest part of woman’s work in this world.

Two years after the death of Josephine, Jacob married Louisa Wilson, and a son Edward, was born. 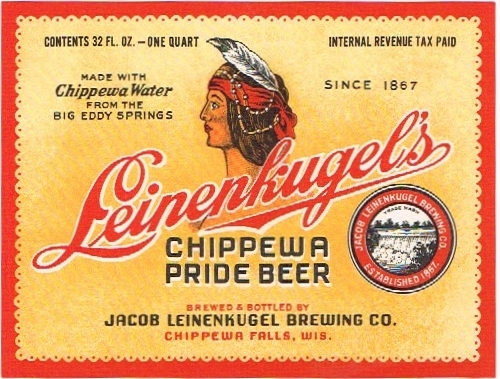 It wasn’t unusual for Jacob Leinenkugel to choose a life of brewing. It was his legacy. Plus, he looked the part! Perfectly cast, he was a big, round, hard-working German. What many people don’t know is that Jacob had other interests too.

He erected and owned the first creamery in the county. He opened a meat and grocery store on brewery property. He milled feed grains for the dairy industry and made “Snowdrift” flour for the local retail market. (The firms dam formed the millpond which was located across from Irvine Park. After Jacob’s death and the venture became unprofitable, the mill was razed and the land donated to the city in connection with the Marshall family to form Marshall Playgrounds.) He was elected alderman in the first city election of 1869 and was reelected in 1871,1880 and 1883. He was the mayor of Chippewa Falls on three separate occasions: 1873, 1884 and 1891. He was extremely progressive and enjoyed and embraced the use of new inventions and technology. In fact, as mayor of Chippewa Falls he pushed for electric streetlights in the downtown area. (Our fine city had electric streetlights before the large thriving metropolis to the west, called St. Paul, Minnesota.)

Jacob and his family had their “summer home” on the shores of a lake north of Chippewa Falls. It was his refuge-that special spot where an individual or the family gathered to celebrate all of life’s blessings. Each year a family “outing” was planned. One summer Sunday all members of the family arrived home to head north for the annual outing when Jacob became ill. He requested that the family not wait for him … he’d follow in a few days after he felt better. Jacob never felt better. The family was summoned home. 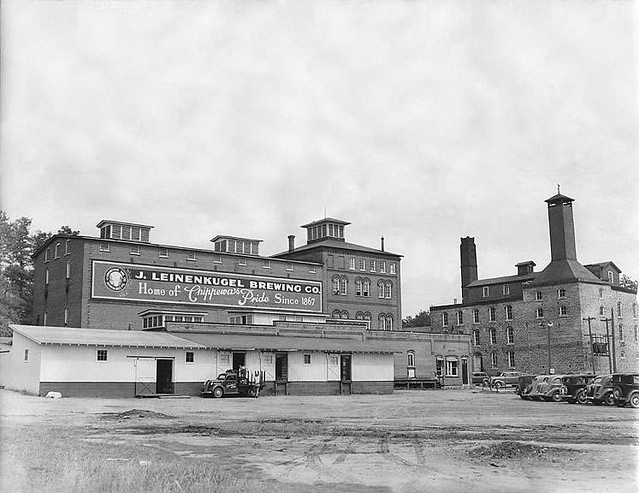 And this fuller history is from the website Chippewa Falls History:

When people hear the name Leinenkugel, most would think of the beer or maybe even Chippewa Falls, Wisconsin. As the owner of Colette’s Tavern says, “Some people get hysterical when they find out I have it. The beer’s got some kind of charm.” (Brewer’s Digest). Most, however, do not think of the rich and interesting history that has gone into the Jacob Leinenkugel Brewing Company. Most of this history comes from its origins and how over five generations, the business has kept within the Leinenkugel family. To properly tell the history of this family, we must start at the beginning with Jacob Mathias Leinenkugel himself. Jacob Leinenkugel was born May 22nd, 1842 in Prussia to Matthias and Maria Leinenkugel (1860 Federal Census). Jacob and his entire family arrived in New York on August 2nd, 1845. They had taken a ship, the American, from Amsterdam to New York, New York. Jacob Leinenkugel was three at the time of this trip (Arrival in New York, 1845). The Leinenkugel family settled in Prairie du Sac, Wisconsin and stayed there to raise their children (1860 Federal Census). In 1865, Jacob Leinenkugel married Josephine Imhoff in Sauk City, Wisconsin. Two years later, Jacob, Josephine and their son, Mathias, all moved to Chippewa Falls when Jacob started the Spring Brewery, now known as the Jacob Leinenkugel Brewing Company (Chippewa Falls Main Street, pg. 76). 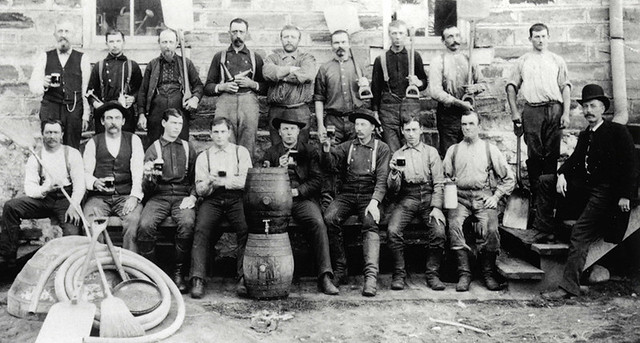 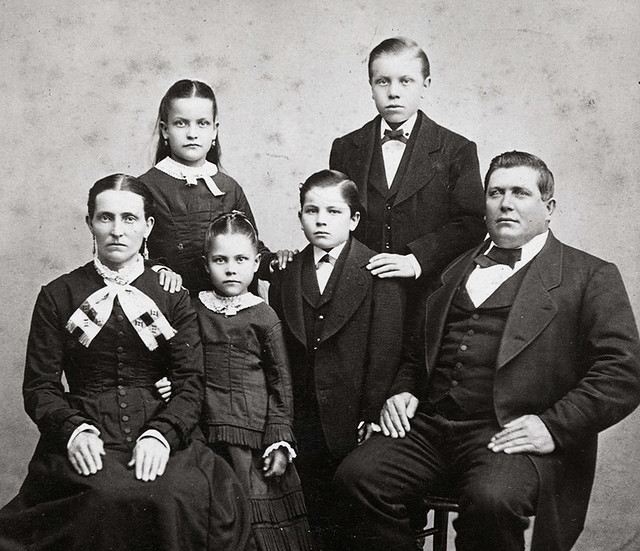 In further blogs, I will touch on each of his children and their families. Unfortunately, William from Jacob Leinenkugel’s first marriage did not live very long. He passed away suddenly on January 22nd, 1897. The Chippewa Herald reported that he “…died at noon today of consumption after suffering about two years with this disease.” William had worked at the brewery with his father and the rest of his family. The paper states how he was “…a hard and faithful worker and a valuable assistant to his father who depended largely on his son’s good judgment on matters pertaining to the…business.” (Chippewa Herald).

Jacob Leinenkugel passed away on July 21st, 1899. Before his death, he contributed many things to Chippewa Falls, other than the Brewery. One of these accomplishments was erecting and owning the first creamery in the county. He was also able to serve as mayor three separate times in Chippewa Falls, in 1873, 1884, and 1891. All of these accomplishments paint a picture of a man who was “…a thoughtful, patriotic citizen, ever devoted to the welfare of the city and anxious in every way with his reach to promote the happiness and welfare of his fellow men.” (Daily Independent). 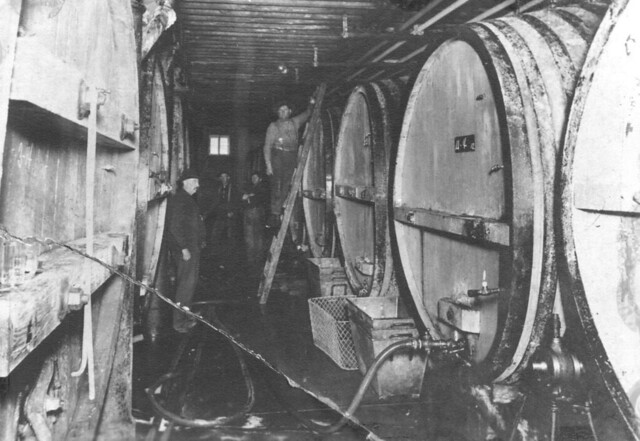 After Jacob Leinenkugel’s first wife, Josephine, passed away, he waited two years before marrying Anna Louise Wilson in 1892. Not nearly as much is known about his second marriage, but it’s still quite interesting.

Anna Louise Wilson was born in December of 1865, in Pennsylvania (Wisconsin State Census, 1905). Her parents were Bernhard and Eva Wehrle. Her father was born in 1823 and her mother in 1823. They were both born in Switzerland. Their whole family lived in St. Louis, Missouri, where her father worked as a backer (St. Louis 1880 Census).

After Jacob and Anna’s marriage in April, 1892, they had two children. The first was named Della and she was born in 1894 (Wisconsin State Census, 1905). However, there was no further information found on her after 1905. Their other child was Edward J. and he was born on September 21st, 1896 (Wisconsin Vital Record Index). Edward grew up to be a first lieutenant in the U.S. Army during World War I. He started his service on June 5th, 1918 (U.S. Veterans Gravesites). When he came back from the war, he married Eleanor in 1920 (1930 Federal Census). Edward and Eleanor lived in St. Paul, Minnesota for a short time after getting married, where Edward worked as a salesman (City Directories).

For the next few years, it appears they moved around as they started having a family. Patricia “Patty” Leinenkugel was born June 17th, 1923 in Illinois. Their second oldest, Joanne Leinenkugel, was born in 1927 in Missouri. Finally, their youngest, Roberta O. Leinenkugel, was born June 4th, 1929 in Florida (1930 Federal Census, Cook County Birth Index). According to the City Directories, Edward and Eleanor stayed in Tampa, Florida until 1932. During this time, Edward worked as a real estate agent and as a salesman. Then, in 1934, the family moved back to St. Paul, Minnesota. Here, Edward worked as a broker, a box maker, and a packer. In 1941, he worked as a packer for Swift & Co. (City Directories). Edward and Eleanor were able to live out the rest of their days together. Edward passed away on October 31st, 1967. Not even three years later, Eleanor passed away as well on August 6th, 1970 (Minnesota Death Index).

And this tray was created to commemorate the brewery’s 125th anniversary in 1992. 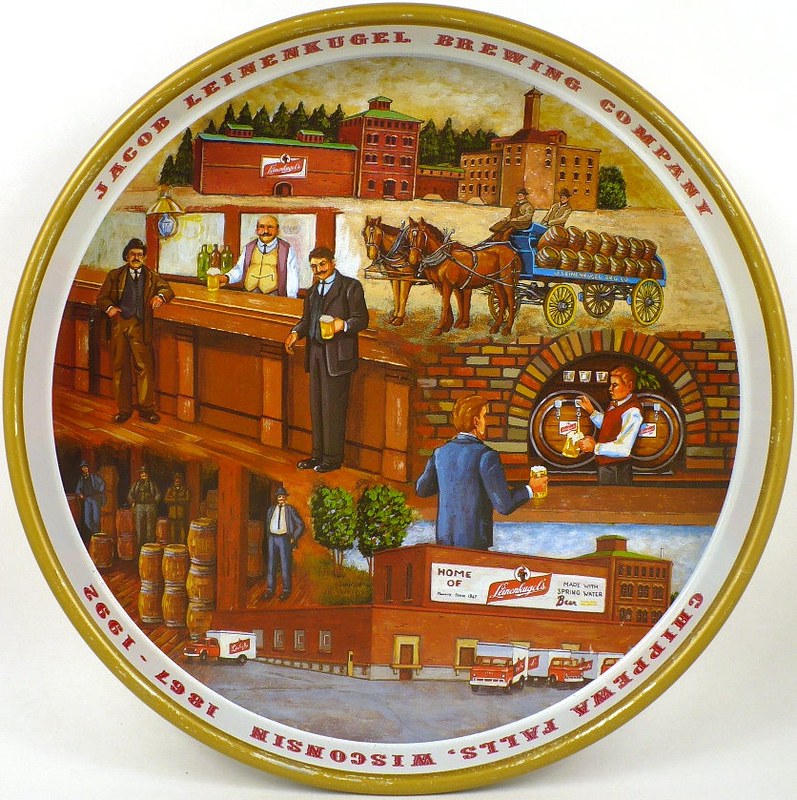 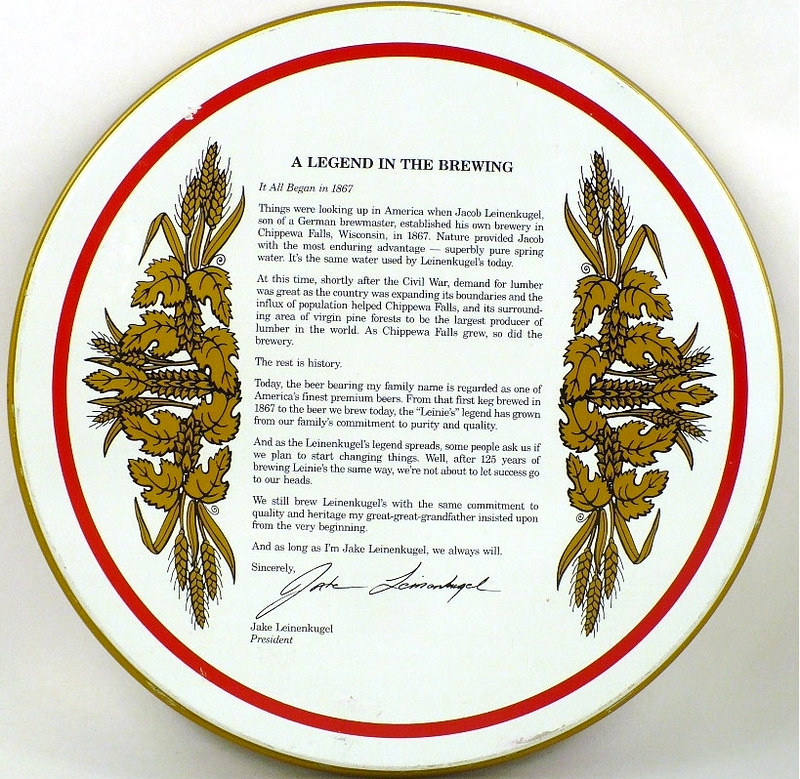