Today is the birthday of Michael Arthur Bass (November 12, 1837–February 1, 1909). He was the oldest “son of Michael Thomas Bass and the great-grandson of William Bass, the founder of the brewery firm of Bass & Co in Burton,” England. 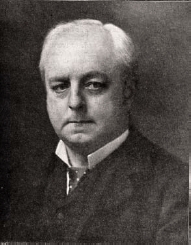 He was “known as Sir Michael Bass, 1st Baronet, from 1882 to 1886, was a British brewer, Liberal politician and philanthropist. He sat in the House of Commons from 1865 to 1888 when he was raised to the peerage as Baron Burton. He was a Director of the family firm of Bass, Ratcliff, Gretton and Co. from 1863, and Chairman of the Directors upon his father’s death in 1884. He also sat as a Member of Parliament for Stafford from 1865 to 1868, for East Staffordshire from 1868 to 1885 and for Burton from 1885 to 1886. As a brewer, it was uncomfortable to be a Liberal MP as there was a strong temperance element to the Liberal party at the time.” 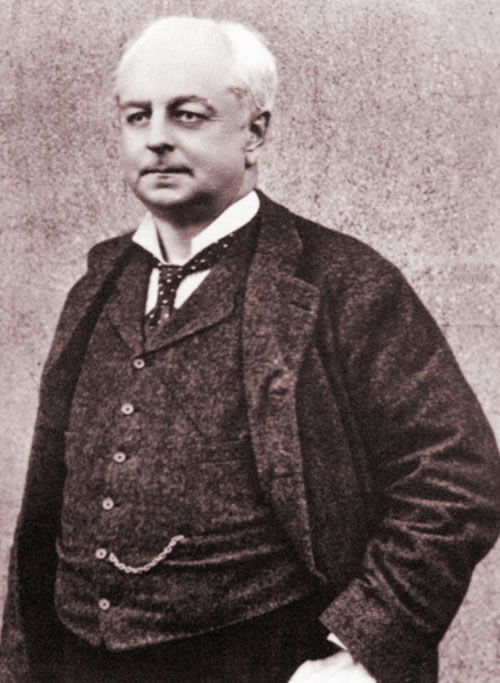 This account of his life is from the 1912 Supplement to the Dictionary of National Biography, by Charles Welch:

BASS, Sir MICHAEL ARTHUR, first Baron Burton (1837–1909), brewer and benefactor, born in Burton-on-Trent on 12 Nov. 1837, was elder son of Michael Thomas Bass, brewer [q. v.], by his wife Eliza Jane, daughter of Major Samuel Arden of Longcroft Hall, Staffordshire. Educated at Harrow and Trinity College, Cambridge, he graduated B.A. in 1859, M.A. in 1863. Bass on leaving the university at once entered his father’s brewing business, and was soon well versed in all branches of the industry. By his energy he did much to extend its operations, became head of the firm on the death of his father in 1884, and to the end of his life never relaxed his interest in the active management. The firm, which was reconstructed in 1888 under the style of Bass, Ratcliff & Gretton, Ltd., has buildings covering over 160 acres of land, employs over 3000 men, pays over 300,000l. a year in duty, and has a revenue of over 5,000,000l. per annum.

Bass entered parliament in 1865 as liberal member for Stafford, represented East Staffordshire 1868-85, and the Burton division of Staffordshire 1885-6. He proved a popular member of the house, and was a personal friend of Gladstone. His father having refused both a baronetcy and a peerage, Bass was made a baronet in vita patris in 1882, with remainder to his brother, Hamar Alfred Bass, and his heirs male; Hamar Bass died in 1898, leaving his son, William Arthur Hamar Bass, heir to the baronetcy. Bass was opposed to Gladstone’s home rule policy in 1886, but on other great questions he remained for the time a consistent liberal, and presided on 9 March 1887 when Francis Schnadhorst, the liberal party organiser, was presented with a testimonial of 10,000 guineas. He was raised to the peerage on Gladstone’s recommendation on 13 Aug. 1886 as Baron Burton of Rangemore and Burton-on-Trent, both in co. Stafford.

The growing hostility of the liberal party to the brewing interest as shown in their licensing policy and the widening of the breach on the Irish question led Burton to a final secession from the liberals, and he became a liberal unionist under Lord Hartington and Mr. Chamberlain. After 1903 he warmly supported the latter’s policy of tariff reform, and he led the opposition to Mr. Asquith’s licensing bill in 1908, which was rejected by the House of Lords.

Always genial, outspoken, and good-humoured, Burton was a personal friend of King Edward VII, both before and after his accession. The king frequently visited him at his London house, Chesterfield House, Mayfair, at his Scottish seat, Glen Quoich, and at Rangemore, his stately home on the borders of Needwood Forest, near Burton. The king conferred upon him the decoration of K.C.V.O. when he visited Balmoral in 1904.

He was a deputy-lieutenant and a J.P. for Staffordshire, and a director of the South Eastern Railway Company. An excellent shot, he was long in command of the 2nd volunteer battalion of the North Staffordshire regiment, retiring in August 1881 with the rank of hon. colonel. He built and presented to the regiment the spacious drill-hall at Burton, and gave for competition at Bisley the Bass charity vase and a cup for ambulance work. Burton’s gifts and benefactions to the town of Burton were, like those of his father, munificent; together they presented the town hall, which cost over 65,000l. He gave club buildings to both the liberal and the conservative parties in succession; he constructed, at a cost of about 20,000l., the ferry bridge which spans the valley at the south end of Burton, and afterwards freed the bridge from toll at a cost of 12,950l. and added an approach to it over the marshy ground known as the Fleet Green Viaduct in 1890. As an acknowledgment he accepted a piece of silver plate, but he declined the proposed erection of a public statue. As a loyal churchman he generously contributed towards all diocesan funds, but will chiefly be remembered as a builder of churches. St. Paul’s Church at Burton, built by him and his father, is a miniature cathedral; its cost in first outlay was 120,000l., a sum of 40,000l. was provided for its endowment, and large sums in addition for improvements and embellishments. Another fine church, St. Margaret’s, Burton, was also built by father and son, and they erected St. Paul’s Church Institute at a cost of over 30,000l.

Burton had a cultivated taste as an art collector, and Chesterfield House, his residence in Mayfair, which he bought of Mr. Magniac, was furnished in the style of the eighteenth century and contained a choice collection of pictures by English artists of that period, which became widely known owing to his generosity in lending them to public exhibitions; Gainsborough, Reynolds, and Romney were represented both numerously and by masterpieces. His more modern pictures were at Rangemore, and included some of the best works of Stanfield, Creswick, and their contemporaries.

Burton died after an operation on 1 Feb. 1909, and was buried at Rangemore church. He married on 28 Oct. 1869 Harriet Georgiana, daughter of Edward Thornewill of Dove Cliff, Staffordshire, by whom he had issue an only child, Nellie Lisa, born on 27 Dec. 1873, who married in 1894 James Evan Bruce Baillie, formerly M.P. for Inverness-shire. In default of male issue, the peerage, by a second patent of 29 Nov. 1897, descended to his daughter.

By his will he strictly entailed the bulk of his property to his wife for life, then to his daughter, then to her descendants. The gross value exceeded 1,000,000l. He requested that every person and the husband of every person in the entail should assume the surname and arms of Bass, and reside at Rangemore for at least four months in every year. 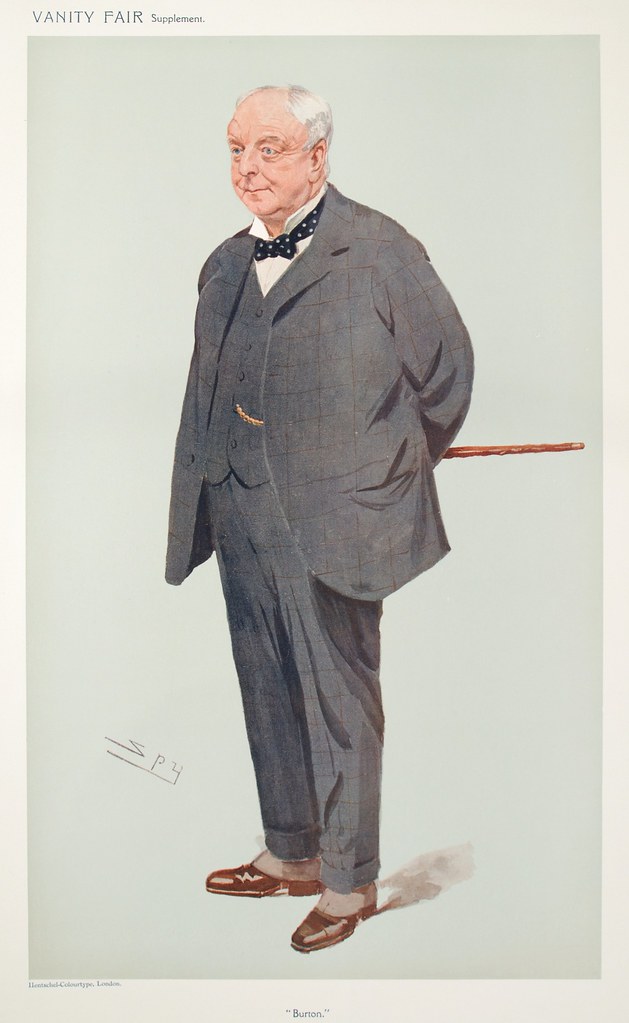 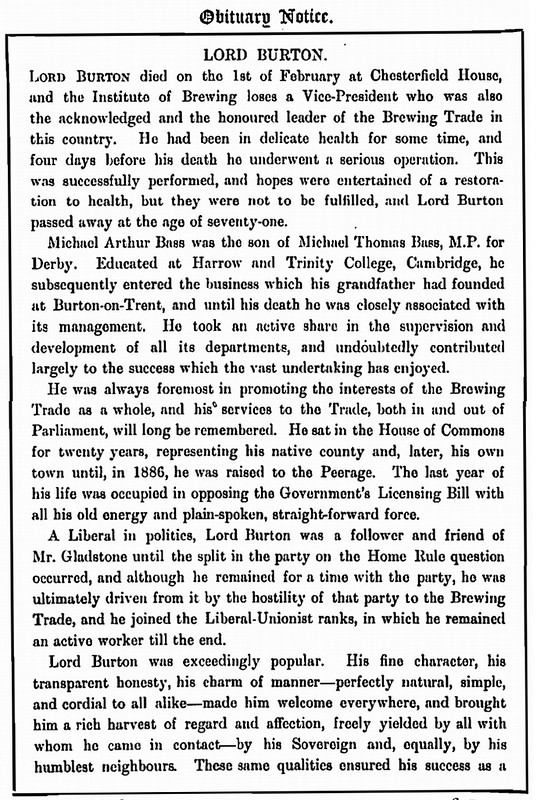 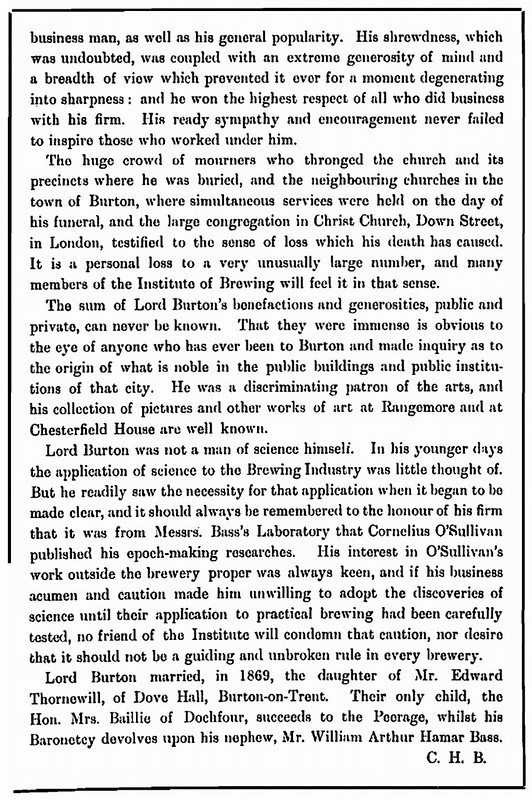 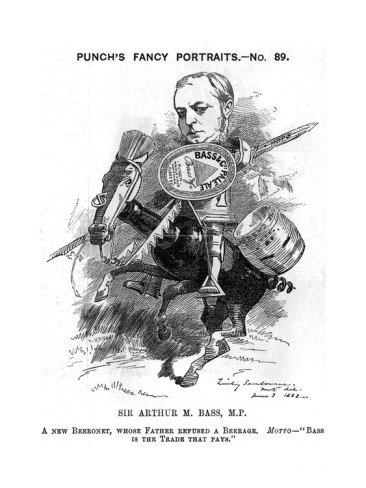 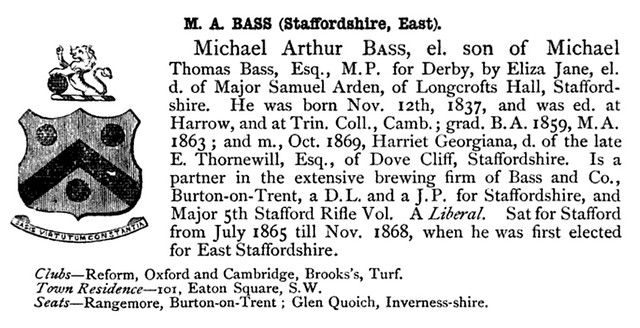