Tonight, of course, in Burns Night, with Burns Suppers and other celebrations going on in Scottish, and other, communities worldwide. The reason it’s today is because it’s the day that Scottish poet and lyricist Robert Burns was born (January 25, 1759–July 21, 1796). He was “also known as Rabbie Burns, the Bard of Ayrshire, Ploughman Poet and various other names and epithets. He is widely regarded as the national poet of Scotland and is celebrated worldwide. He is the best known of the poets who have written in the Scots language, although much of his writing is also in English and a light Scots dialect, accessible to an audience beyond Scotland. He also wrote in standard English, and in these writings his political or civil commentary is often at its bluntest.” 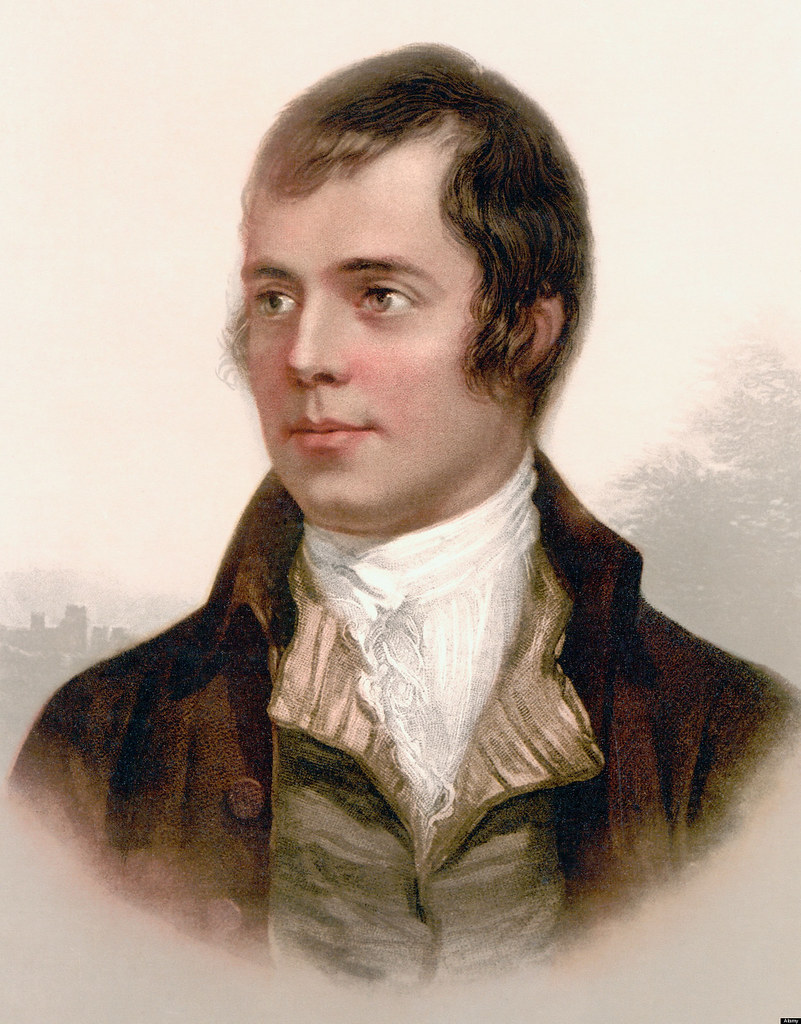 He is regarded as a pioneer of the Romantic movement, and after his death he became a great source of inspiration to the founders of both liberalism and socialism, and a cultural icon in Scotland and among the Scottish diaspora around the world. Celebration of his life and work became almost a national charismatic cult during the 19th and 20th centuries, and his influence has long been strong on Scottish literature. In 2009 he was chosen as the greatest Scot by the Scottish public in a vote run by Scottish television channel STV.

As well as making original compositions, Burns also collected folk songs from across Scotland, often revising or adapting them. His poem (and song) “Auld Lang Syne” is often sung at Hogmanay (the last day of the year), and “Scots Wha Hae” served for a long time as an unofficial national anthem of the country. Other poems and songs of Burns that remain well known across the world today include “A Red, Red Rose”, “A Man’s a Man for A’ That”, “To a Louse”, “To a Mouse”, “The Battle of Sherramuir”, “Tam o’ Shanter” and “Ae Fond Kiss”. 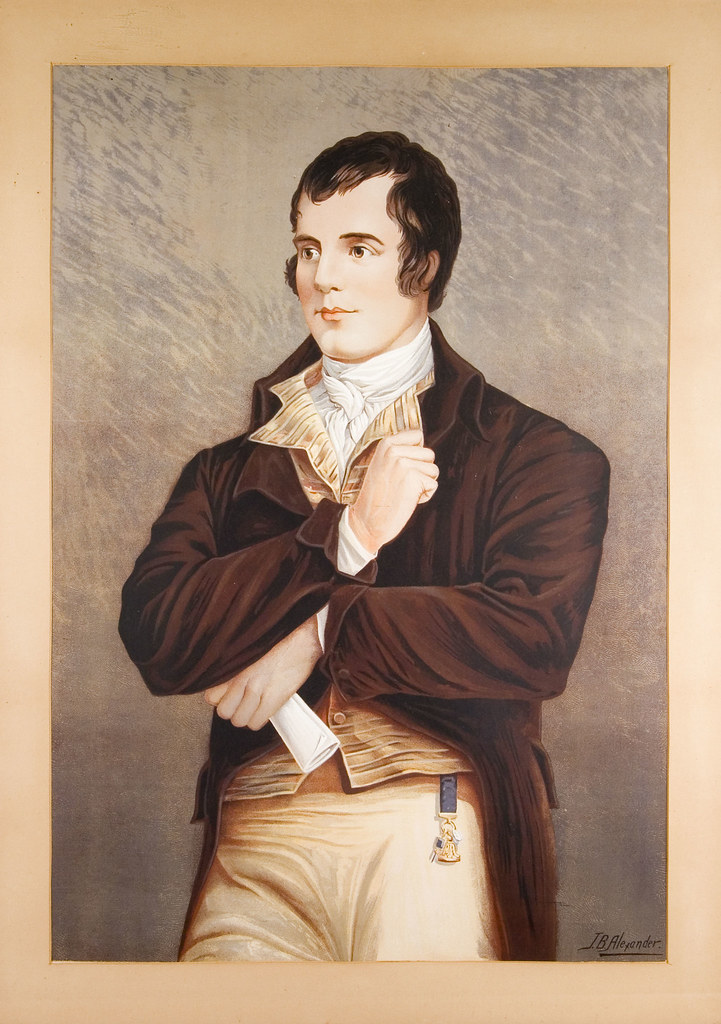 Never been to a Burns Night? The Telegraph has an answer to What is Burns night and who was Robert Burns? “It’s a night that features whisky, haggis and poetry in honour of ‘Rabbie’ Burns.” Notice that it’s primarily whisky that is the featured drinks at these events. In a nutshell, “Burns suppers may be formal or informal. Both typically include haggis (a traditional Scottish dish celebrated by Burns in Address to a Haggis), Scotch whisky and the recitation of Burns’s poetry. Formal dinners are hosted by organisations such as Burns clubs, the Freemasons or St Andrews Societies; they occasionally end with dancing when ladies are present.”

Burns’ favorite drink was most likely whisky, but that doesn’t mean he wouldn’t drink wine or beer, and that fact was reflected in his poetry and song lyrics. He even did his own well-known version of the folksong John Barleycorn. So after you’ve enjoyed your haggis, and drank your whisky, here are a selection of Burns’ work where he mentions beer or ale. Some are the full poem, though most are simply an excerpt from longer poems or lyrics.

“Strong ale was ablution,
Small beer persecution,
A dram was memento mori;
But a full-flowing bowl
Was the saving his soul,
And port was celestial glory.”

“Leeze me on drink! it gies us mair
Than either school or college;
It kindles wit, it waukens lear,
It pangs us fou o’ knowledge:
Be’t whisky-gill or penny wheep,*
Or ony stronger potion,
It never fails, or drinkin deep,
To kittle up our notion,
By night or day.”

“Lady Onlie, honest Lucky,
Brews gude ale at shore o’ Bucky;
I wish her sale for her gude ale,
The best on a’ the shore o’ Bucky.”

I had sax owsen in a pleugh,
They drew a’ weel eneugh,
I sald them a’, ane by ane,
Gude ale keeps my heart aboon.

Gude ale hauds me bare and busy,
Gars me moop wi’ the servant hizzie,
Stand i’ the stool when I hae done,
Gude ale keeps my heart aboon.

“Here brewer Gabriel’s fire’s extinct,
And empty all his barrels:
He’s blest – if as he brew’d he drink –
In upright, honest morals.”

“There was a wife wonn’d in Cockpen, Scroggam;
She brew’d gude ale for gentlemen;
Sing auld Cowl lay ye down by me,
Scroggam, my dearie, ruffum.” 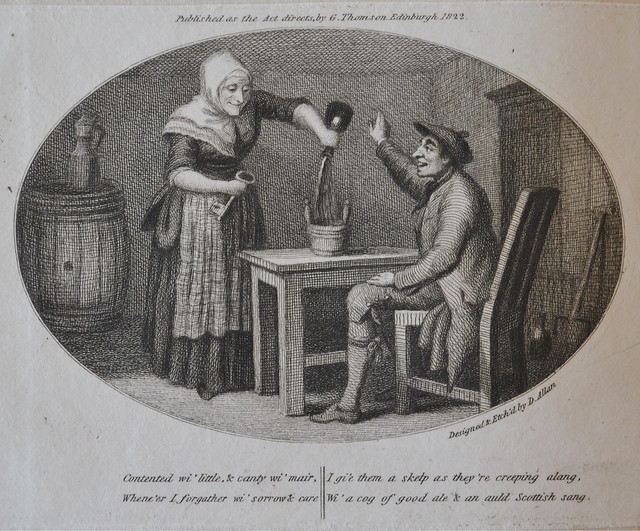 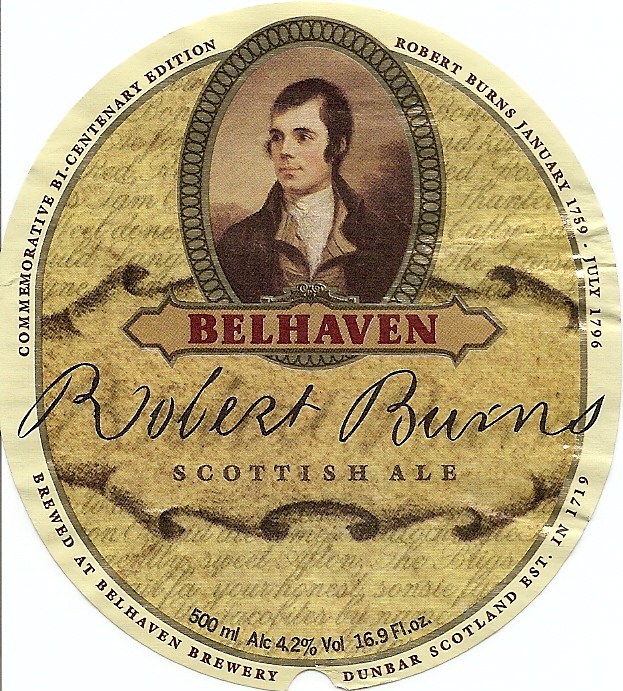