Today is the birthday of William Lindsay Everard (March 13, 1891-March 11, 1949). Known as Lindsay, or Sir Lindsay, William Lindsay Everard was the grandson of William Everard, who in 1849, along with Thomas Hull founded the Everard Brewery in Leicester, England. He took over the family brewery in 1925 and ran it for 25 years. He was also a politician (as a member of parliament), philanthropist and a founder and supporter of the Ratcliffe Aerodrome. Sir Lindsay was a pioneer aviator, knighted for his crucial efforts in World War II with the Air Transport Auxiliary. 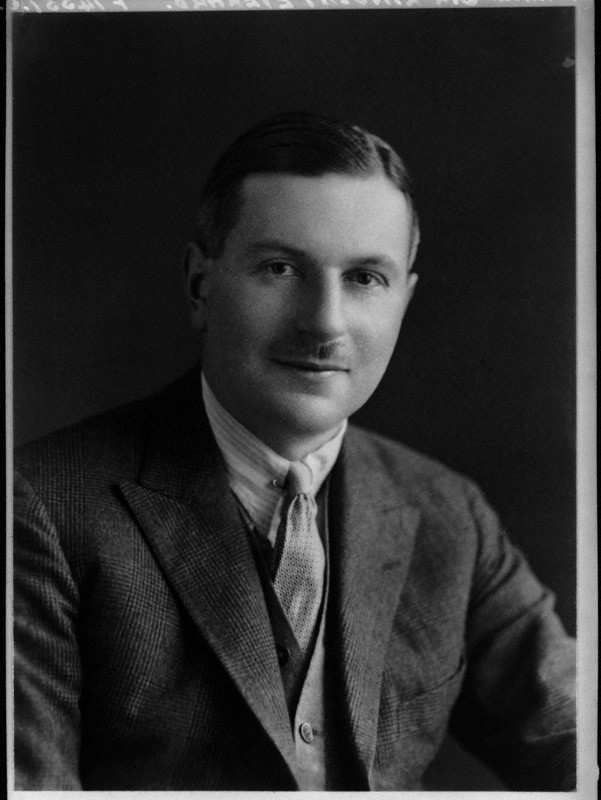 William Lindsay Everard was 34 years old when his father died and control of the company was passed to him. During World War 1 he served in the Leicestershire Yeomanry from 1914 to 1917, rising to be adjutant. He saw active service in France with the 1st Life Guards until the end of hostilities in 1919.

William Lindsay married Cornelia Ione Kathleen Armstrong on the 28th of September 1917. They had two children, Bettyne Ione in 1919 and Patrick Anthony William Beresford in 1922. The family moved into Ratcliffe Hall, Leicestershire the same year and after the war, Sir Lindsay followed the family tradition and was active in local public life.

He became a J.P in 1923, Deputy Lieutenant of the County in 1924 and High Sheriff in 1924. He followed his grandfather’s long service in local politics and came as no surprise when he took to national politics and to Westminster. In 1924 he stood as the Conservative Party candidate for the Melton constituency in the General Election. Using Ratcliffe Hall as his headquarters, he campaigned using the slogan, “If you work hard for Everard, he’ll work hard for you.” Stanley Baldwin’s Conservatives won with an overall majority of more than 200 seats, one of whom was Melton’s new Member of Parliament, Lindsay Everard.

He took his seat in Westminster for the first time in November 1924 and served his constituency for over twenty years. In 1939 he received a knighthood from King George VI for his services to commerce and aviation.

Sir Lindsay had a lifelong interest in aviation, gaining his private pilot’s license in the 1920s. He became president of the Royal Aero Club, the County Flying Club, and the Leicester Aero Club. 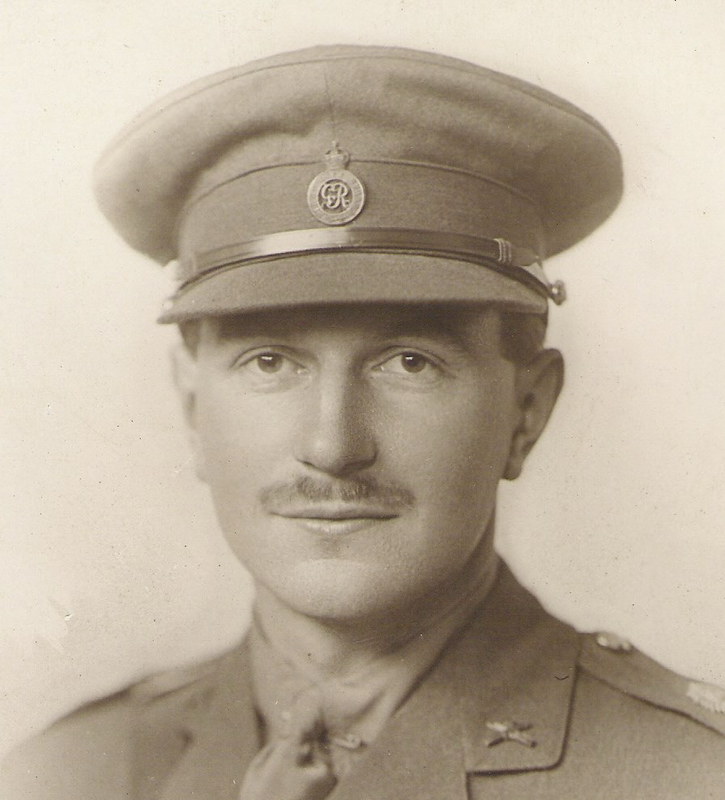 While he was running the brewery, his interest was actually elsewhere; on aviation. He legacy is considered first and foremost as a pioneer of British aviation.

Wartime aviation has changed the course of history and Sir Lindsay Everard is an important contributor to its development. In 1930, Sir Lindsay opened Ratcliffe Aerodrome on 45 acres (180,000 m2) near his estate and Ratcliffe College. He had become President of the Leicester Aeroclub in 1928, purchasing the club a de Havilland Gipsy Moth in 1929. Named “The Quorn”, the club used Carts Field at Desford. A large air show brought 30,000 spectators to the site. Sir Lindsay purchased a de Havilland Puss Moth that he named “The Leicestershire”, and sold in July 1932. He also favoured the Percival Gull Four P.1.B Mk. IIa

Ratcliffe Aerodrome opened with a ‘Grand Air Pageant’ on 6 September 1930. Famed aviator Amy Johnson made an unexpected trip from London to participate with Sir Sefton Brancker, Director of Civil Aviation. Some 5000 spectators were treated to a show with 100 planes and staged bombings of Chinese pirates. There was one crash, but no one was killed. Ratcliffe Aerodrome was one of the finest in civil aviation with a comfortable clubhouse and an outdoor pool. The hangars were first class and the many air shows and displays had the atmosphere of a garden party.

Sir Lindsay was not a pilot himself, but hired personal pilots to travel throughout the world and participate in air racing events. He owned a de Havilland Dragon, an 8-seat aircraft, with which they won the Oasis Trophy in Cairo. With pilot Lt. Com. Phillips he won the Grosvenor Cup air race. Among his personal pilots were Winifred Spooner, a celebrated woman aviator, and Albert Codling, Sir Lindsay’s Chief Inspector responsible for the maintenance of all his aircraft. Sir Lindsay was supportive of every aspect of aviation, including gliders. He was the first president of the Model Aero Club. His airmail postage stamp collection was sold by H.R. Harmer of London on 19 and 20 October 1953 in 530 lots.

The County Flying Club was formed at Ratcliffe and in 1938 moved to a field at Rearsby on land owned by Sir Lindsay. Another member of the County Flying Club, Alexander Lance Wykes, was the managing director of Crowthers Limited, a Thurmaston company, that manufactured textile machinery. In 1938, Wykes negotiated a license agreement with American manufacturer Taylorcraft to build a light aeroplane in England. It was designated the Taylorcraft “Plus C” model and the first one built was brought by road to Sir Lindsay’s Aerodrome where it made its maiden flight on 3 May 1939. This aircraft became an important part of the war effort in World War II and a production order of 100 aircraft designated the Taylorcraft-Auster Mk 1 was placed in 1942. The Auster continued to be an important and popular plane long after the war.

With the onset of World War II, civil flying was suspended on 31 August 1939. Ratcliffe Aerodrome had a central location that made it an important field for the ATA, a network of civilian pilots that ferried new aircraft from the factories and those that needed repair. Ratcliffe Aerodrome was ferry pool no. 6 of the original 14 started in 1942. The Aerodrome grew larger during the war, adding new facilities. Some 50,000 ferry flights passed through this ideal staging ground.

When the ATA was disbanded, the event was commemorated by an air show on 6 October 1945 that included Geoffrey de Havilland. Sir Lindsay was knighted during the war for services to aviation and commerce. The Leicester Aeroclub reformed in 1947 and drew a crowd of 10,000 for an event in 1949. Sir Lindsay died that year and his estate was sold to non-flyers. Ratcliffe Aerodrome closed on 25 March 1950. It fell into disrepair with some of the buildings being used as barns for the surrounding farms. 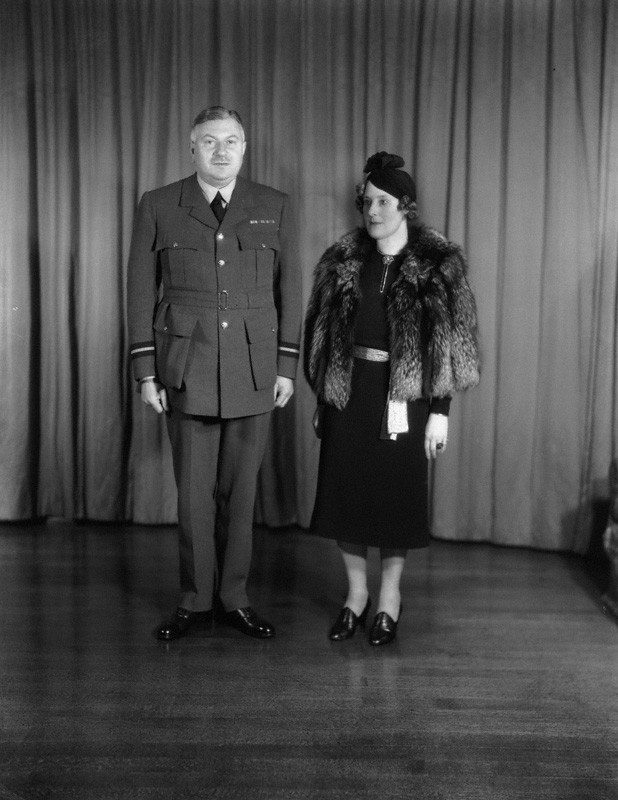 Sir Lindsay with his wife Cornelia Ione Kathleen, taken in 1939,
and now also in the National Portrait Gallery.

And here’s a short history of the brewery from the beginning until Sir Lindsay took control, from Wikipedia:

The business expanded as the company progressively acquired outlets, with over 100 pubs by the late 1880s. In 1875 the company moved to a new state of the art tower brewery designed by Thomas’s nephew architect John Everard. The brewery, on the corner of Southgate st and Castle St extracted very pure water from wells 300 feet deep beneath the premises and steam engines played a significant part in the mechanisation.

After the death of William, control passed to his son Thomas. The historic centre of the UK brewing industry remained some 40 miles away at Burton-upon-Trent, which by the 1890s produced one tenth of Britain’s beer. Everard’s leased the Bridge Brewery on Umplett Green island in 1895 but its 10,000 barrels per year capacity proved insufficient. It was replaced with the newer Trent brewery in Dale St which became available after going into liquidation in 1898. The Southgate brewery remained the distribution centre to the Leicestershire pubs with beer arriving by rail from Burton. The Trent brewery was purchased outright in 1901.(sources differ)[5] It was renamed the Tiger Brewery around 1970. Beer production was seriously affected by World War I, both due to recruitment and the Defence of the Realm Act 1914 which required beer to be diluted, restricted opening times and rationed raw materials. In 1920,(sources differ) Everards bought wine and spirit merchants John Sarsons & Son of Hotel St Leicester, a major supplier to wealthy homes.

Thomas moved his family from Narborough Wood House to Nanpantan Hall. In 1909 he opened a cattle trough in Groby on behalf of the Metropolitan Drinking Fountain and Cattle Trough Association. and in 1921, a year which saw beer production peak at 55,000 barrels, the company acquired the Stamford arms in Groby, the former home of both Thomas’s grandfather, Richard Everard a yeoman tenant farmer of the Grey estate and his great grandfather.

In 1924, the company completed its move away from rail transport to steam powered drays which continued in use until replaced by petrol lorries in 1946.

Thomas died in 1925 and was succeeded by his son William Lindsay Everard who lived in Ratcliffe Hall. The Great Depression saw a penny tax on beer. 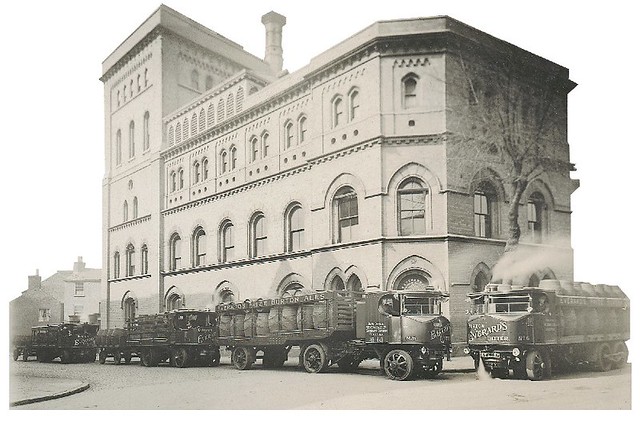 The then-new Everards brewery on the corner of Southgate Street and Castle Street in Leicester, showing steam traction engines in 1875.