You are here: Home / Breweries / Kurt Widmer Announces His Retirement

Kurt Widmer, the older brother in Widmer Brothers Brewing, announced today he will be retiring at the end of 2015 from the day-to-day work with the business he founded with his brother Rob in 1984, 31 years ago.

Here’s the press release from the Craft Brew Alliance:

Kurt R. Widmer, 63, co-founder of Widmer Brothers Brewing, announced today that he will retire from Craft Brew Alliance, Inc. (“CBA”) and will be leaving CBA’s Board of Directors at the end of the year. At that time, he will assume the honorary title of Chairman Emeritus. Mr. Widmer has served as Chairman of the Board since Craft Brew Alliance was formed in 2008 through the merger of pioneering Pacific Northwest craft brewing companies Redhook Brewery and Widmer Brothers Brewing. Previously, Mr. Widmer served as President, Chief Executive Officer and Chairman of the Board of Widmer Brothers Brewing Company from 1984 until 2008.

Mr. Widmer will remain in his role through December 31, 2015 to support the transition as CBA’s Board of Directors engages in the process of selecting a new Chairperson.

“Since my brother Rob and I founded Widmer Brothers Brewing over 31 years ago, this extraordinary industry that we helped create has grown and evolved in ways I couldn’t even imagine,” said Mr. Widmer. “Many of us who set the foundation for today’s booming craft beer market are thinking about the next chapter in our lives, and my wife Ann and I have been discussing the fact that there’s still a lot we want to do. So while I’ll miss walking into my office at the brewery every day, I’m admittedly looking forward to more time with my family and doing more of what I love to do – whether it’s traveling around the world or home brewing in the basement.”

He continued, “In terms of timing, I feel really good about where CBA is today. Looking back on how CBA has grown from two craft beer companies to a powerful alliance of great beers, brands, breweries and partners, I couldn’t be more confident in the future. The focus, expertise, and vision of the leadership team, under the helm of Andy Thomas, are further proof that CBA, its people, and its shareholders are in great hands. People who know me will probably not believe that I’m stepping away from Widmer Brothers and CBA. As a Widmer Brother, I will always look forward to that next innovative collaboration or a chance to connect with Widmer fans over a pint of Hefe at a local account.”

Kurt and Rob Widmer co-founded Widmer Brothers Brewing in Portland, Oregon in 1984 with help from their father Ray. They are among a handful of brewers in the United States credited with creating a universally recognized new style in 1986 with Hefe, the original American-style Hefeweizen and the #1 selling craft beer in Oregon.

“I’ve been fortunate to meet a number of truly remarkable people in this industry, and Kurt Widmer is definitely at the top of the list,” said Andy Thomas, Chief Executive Officer, CBA. “From his role in creating the craft beer category, to his foresight and vision in bringing together CBA to secure his brands’ route to market — and the adversity he faced as a direct result — to the role he continues to play as an impassioned advocate of our industry, Kurt has made a profound impact on many of us. CBA wouldn’t be CBA without Kurt Widmer, and I am grateful for his support and confidence as we continue forward.” 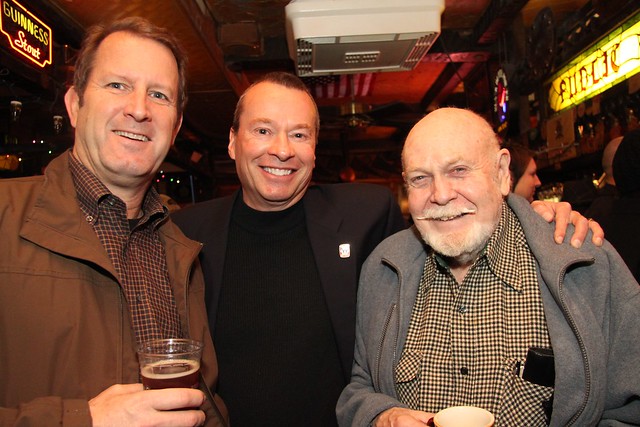 Kurt (center) with Gary Fish and Fred Eckhardt at the Horse Brass for Don Younger’s memorial in 2011.