You are here: Home / Editorial / Mothers For Social Drinking

While searching for an image yesterday, I came across this interesting new group organized earlier this year: Mothers For Social Drinking. It was founded in February by Jennifer and Jeremiah McNichols, who created and write a parenting blog that specializes in product testing called Z Recommends. What prompted them to take action was an annoying item on MSNBC entitled Do playdates and happy hour mix?. After introducing three former working mothers who quit to raise their children — as I did — they set the scene of how they now choose to socialize, with “a sandbox, the swing set and a backyard bar.” Then with the sensationalized moral zealotry so prevalent in daytime television, ask the most puerile of questions. “But is that ok? Drinking while you’re watching your kids?” Just asking this questions speaks volumes about the imbalance in our society today. It is to my mind a ridiculous question and I’m at least pleased to know I wasn’t the only one to think so.

The notion that an adult cannot drink alcohol moderately when children are present is such an astonishingly simple-minded position to take that it’s hard to take it seriously. That so many people here seem to be doing so is shocking. Perhaps more surprising is the number of comments this Today Show story has generated on MSNBC: 256 messages by 213 authors on 22 separate web pages. And while some are supportive and reasonable, a far greater number display the mental acuity of the average Jerry Springer Show audience member. It’s shameful how our educational system has failed us if this is somehow representative of how most people think. I could only make it through a few page’s worth because I had to keep stopping to scream at my computer screen. Eventually, I just gave up to maintain my sanity.

The Today piece goes on ask more annoyingly truculent questions and then cowardly refuses to give any answers — or even their opinion — saying they should be left to “other moms” and “the experts.” One example of these is “[w]ho would drive to the hospital if a child were hurt?” Pul-leeze. Even assuming for a nanosecond that one or two glasses of wine would render anyone incapable of driving or that the sight of your child injured wouldn’t snap you immediately into soberness, has MSNBC never heard of calling 9-1-1 for an ambulance? Or do they believe a glass of wine would render the average mom too incompetent to even dial a phone?

The New York Times also did a piece on this subject, albeit somewhat more reasonably, entitled Cosmopolitan Moms and takes the tone that although some may disagree there is nothing wrong with a few drinks during a playdate. They even highlight Christie Mellor’s parenting book, The Three-Martini Playdate, which has been on my Amazon wish-list ever since I first read a review of it a couple of years ago. 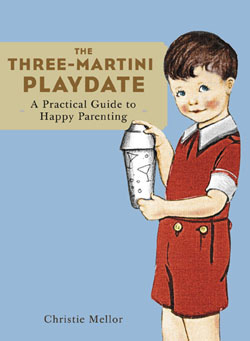 I love the idea of parents banding together to fight this nonsense. Neo-prohibitionists should not be dictating to the rest of us how to live our lives or raise our children. But if they’re the only ones speaking then their voice will be the only one heard. Let’s make our view part of the pubic discourse, too.

Here is Mothers For Social Drinking’s “Statement of Belief:”

We, the undersigned, take exception to the claim that social drinking in the presence of our children is a sign of irresponsible or bad parenting. Further, we contend that it is moderation that makes responsible drinkers, and that moderation and good sense are the responsibility of all citizens; that healthy attitudes towards the consumption of alcohol are learned in the home; that successful parenting does not require us to sacrifice the exercise of our own maturity in order to protect our children’s innocence; and that our society has more to fear from the poor judgment and intemperance of institutions which prey on parental insecurities than with the hospitality we share with other mothers in our parenting journey.

What a beautifully written and well-stated sentiment. Change mothers to “mother and fathers” or “parents” and it’s nearly perfect. I realize using mothers is a nod and an alternative to that other notoriously mad anti-alcohol organization, so I think we can let that slide.

Mothers For Social Drinking have three different badges you can use to show your support if you run a blog or website. I would propose that if you’re a parent who enjoys drinking — mother or father — that you put up one of these on it, with a link to the statement of belief. I”ve also asked the folks at Z Recommends to make a badge with a glass of beer or send me their original graphic so I can create a companion badge for beer lovers. 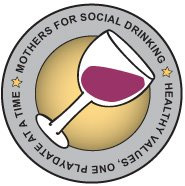 Z Recommends also has an interesting excerpt from an interview by Prof. David J. Hanson, Ph.D. (who hosts the wonderful website Alcohol: Problems & Solutions) with Dwight B. Heath, an anthropology professor at Brown University, who has studied the uses of alcohol across cultures for most of his career.

Dr. Heath: We have to be very careful in the messages that we send. It isn’t helpful to stigmatize a product that, when used in moderation, is associated with better health and greater longevity than is either abstaining or drinking heavily. This is especially the case when to do so tends to increase those problems that do exist.

Dr. Hanson: But isn’t it necessary to warn young people about the dangers of abusing alcohol?

Dr. Heath: Yes. It’s essential that we teach everyone the dangers of abusing alcohol, but in doing so we must be careful to distinguish between drinking in moderation and drinking abusively. Societies that have few alcohol problems tend to view drinking in moderation as entirely acceptable behavior, while they view abusive drinking as totally unacceptable behavior for anyone under any circumstances at any time.

Dr. Hanson: What else can we learn from other societies?

Dr. Heath: In societies that successfully control alcohol abuse, young people usually learn how to drink at home from their parents. In learning how to drink, they are also learning how not to drink. This helps promote moderation and reduces abuse. Importantly, this learning occurs in a caring, safe, supportive environment – not in a raucous fraternity house or military barrack. Again, perhaps ironically, groups that promote abstinence as the only option tend to experience more problems among those who do drink.