You are here: Home / Beers / Nielsen Beer Numbers Show Where Growth Is Happening

Earlier today, Bart Watson, the BA’s economist, tweeted a chart from Nielsen entitled “Craft Beer is a Staple Out West and Growing Across the Country.” The chart is from a new report released yesterday, called Tapped In: Craft and Local Are Powerful Trends in the Beer Aisle. It shows three columns of data, including dollar share, percentage change of dollar volume versus last year and changes in dollar share versus last year. This is for “craft beer,” which Nieslen defines slightly differently than the BA, if memory serves. 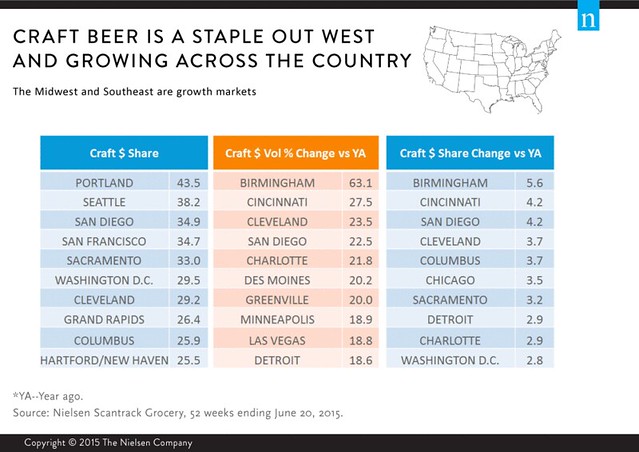 The top five markets for share of craft beer are on the west coast, three of them in California: San Diego, San Francisco and Sacramento. The bottom five are all midwest and east coast, though only Washington DC is a particularly large market, with the other four being somewhat smaller. The top five each represents market in which craft enjoys roughly one-third of all beer sales, which is amazing to me given where we were just ten or twenty years ago.

In terms of change, Birmingham, Alabama is the surprise winner with an astonishing 63.1% growth in volume over last year. Although equally surprising is San Diego who despite being the third largest market for craft, also grew 22.5% more on a large base, and was the fourth highest in volume growth.

Of the categories Nielsen tracks, cider is the one most on fire, with volume up 43.2%. Next is craft beer with 10.2%, tied with Mexican beer, although craft has the edge in percentage change in value, though I’m not entirely sure how that’s calculated. Super Premium, Premium, and Sub Premium are all trending down, with negative numbers, though not by much. Sub Premium is losing the most ground, down 3.5% by volume.

In addition, Nieksen surveyed beer drinkers about how much they care about their beer being local. 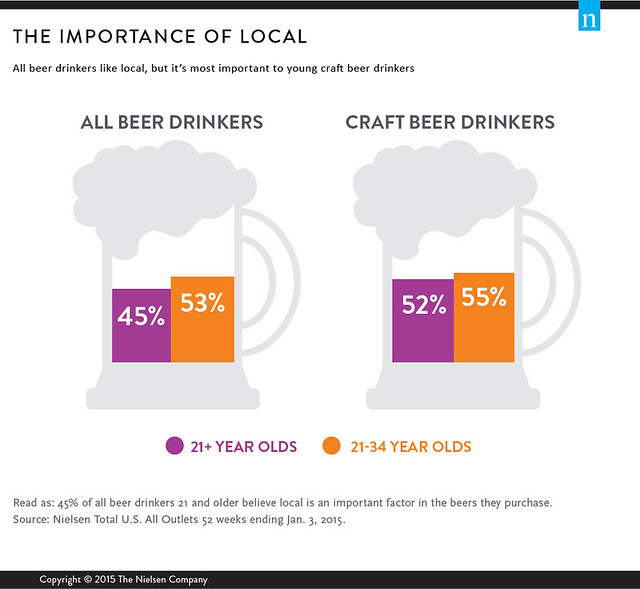 If you’re unfamiliar with Nielsen, they track sales data in primarily larger, chain outlets like groceries, convenience stores, liquor and drug chains, etc. as opposed to beer stores and more independent or unique sales avenues. But because they’ve been collecting consistent data for a number of years, their information is usually pretty reliable and a decent snapshot of what’s going on across the country. Here’s some more of their analysis regarding where people are buying beer.

At the end of June 2015, craft beer accounted for 11.9% of the total dollar volume of the beer category in the U.S. It’s worth noting, however, that craft’s market share varies significantly by channel. For example, it has a much larger share in the grocery channel (20.1%) than the convenience (4.6%) and drug (8.7%) store channels, largely because grocery stores have significantly more floor space available, which allows for greater assortment and options for consumers. That said, however, the convenience channel holds the title for being the leader for overall beer sales, and craft is making a strong run there, growing at a faster pace in the convenience channel (+21.4%) than in grocery stores (+13.7%) for the 52 weeks ending June 20, 2015.