July 8, from Noon to 6:00 p.m., at Drake’s Brewing in San Leandro, California you’ll have a unique opportunity to taste at least sixteen beers all made with the same hop, but with different malt, yeast and water. This should be a lot of fun. Perhaps I’ll see you there.

We will have around 17 local breweries in house with their beers, and all will have made a “single hop beer” or in this case “same hop beer.” The idea was to have each brewer make a beer with their own malt, water and yeast, but have everyone use the same hop. This year we are using the new Summit hop. Come on by and see for yourself how different malts, yeast, water and brewing techniques can change a beer. Brewers will also be bringing some of their other fine products. We will also be playing the game that will be sweeping the brewing nation — Washoe. The $35 admission price includes entry to the fest, all the beer you wish to responsibly consume, entry into the Washoe tournament, a festival t-shirt and a great time. Please join us!

Drake’s is about a 15-20 minute walk from the San Leandro BART station. Buses run up and down Davis Street. Cabs are available at the BART station. We are located at the loading dock area around the back of the Wal-Mart. This is to benefit San Leandro school teachers. Hope to see you here. 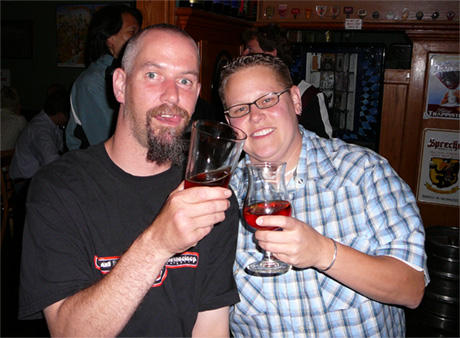 Come out to the festival and meet Drake’s brewers Rodger Davis and Melissa Myers.