Trekkers rejoice, especially if you’ve gone so far as to learn the Klingon language. According to the Hollywood Reporter, CBS has announced “Star Trek’s first officially licensed and recognized brew,” which will be called Klingon Warnog.

The new beer, a “Danish Roggen Dunkel,” was brewed by Tin Man Brewing of Evansville, Indiana, in partnership with CBS Consumer Products and the Federation of Beer. Although curiously, some of the mock-ups list the beer as simply a “Roggen Dunkel” or a “Dunkelweizen.” 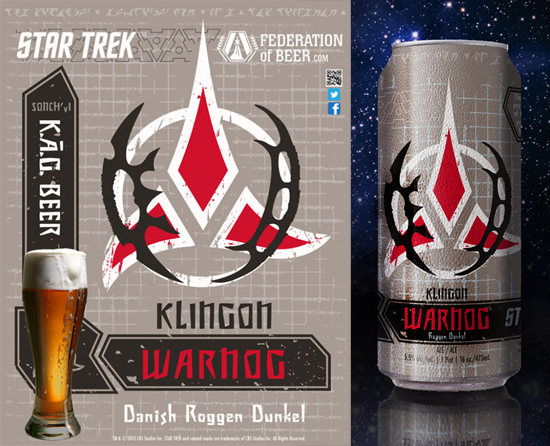 CBS is describing the beer’s flavor as having been drawn “from blending rye malt with a traditional clove character, creating a bold beer suited for the harsh Klingon lifestyle.”

According to the Star Trek Memory Beta wiki, Warnog was mentioned and appeared in an episode of Deep Space Nine — “Sons and Daughters,” from 1997 — along with several Star Trek novels.

The public will get their first preview and taste of Warnog at the Nightclub and Bar Show in Las Vegas today, March 25, 2014, before it becomes available across the U.S. and Canada later this year. This will most likely be the first in a line of Star Trek beverages, and there’s also a Vulcan Ale in the works. “Live long and party on!”